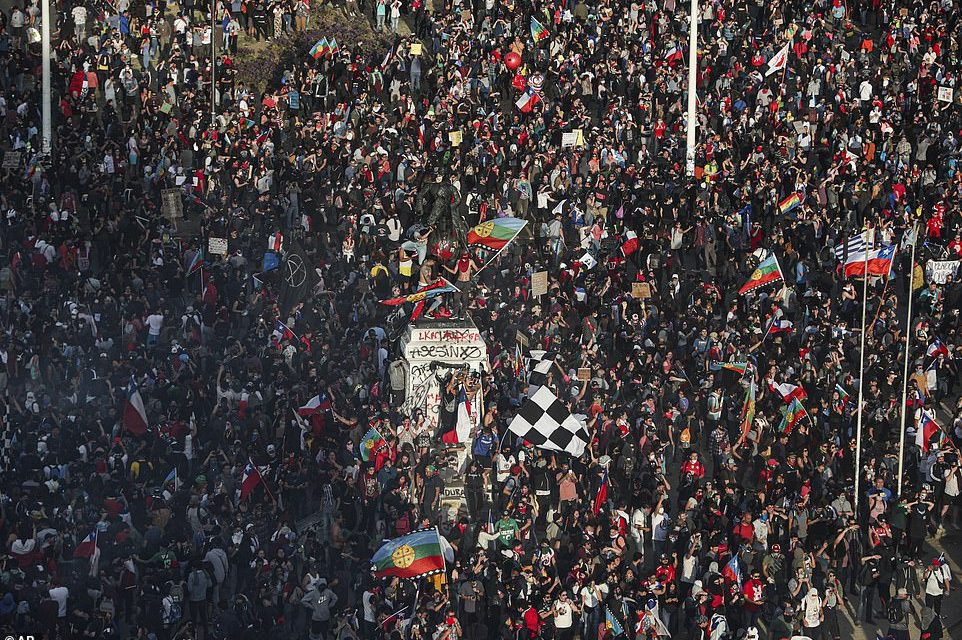 People gather for an anti-government protest in Santiago, Chile, Friday, November 1. Chile's government has since backed down after plans to cut corporate taxes led to tens of thousands taking to the streets in protest

Nick Hanauer, a self-professed capitalist billionaire, spoke at a TED conference only recently. He exposed neoliberalism’s brand of capitalism getting away with murder in plain sight.

Mr. Hanauer described himself: “After a 30-year career in capitalism spanning three dozen companies, generating tens of billions of dollars in market value, I’m not in the top one percent (1.0%), I’m in the top zero-point-one percent (0.1%) of all earners… rich capitalists like me have never been richer… how do we manage to grab an ever-increasing share of the economic pie every year?”

According to Hanauer: “It all comes down to just one thing: Economics.”

There was a time, for example in the 1950s, when economics worked on behalf of everybody in the country. At the time CEO pay was 20xs the average worker. In stark contrast, today’s neoliberal brand of capitalism only works for big corporations and billionaires, nobody else, and CEO pay has skyrocketed to 360xs rank-and-file worker pay.

Neoliberalism is a made-to-order-get-rich-scheme but reserved for the already rich. No outsiders allowed, other than the few that suddenly appear out of nowhere, like apparitions coming to life out of Silicon Valley.

As a consequence of neoliberal ideology over the past 30-40 years, in the USA alone, according to Hanauer: The top 1% has grown 21 trillion dollars richer while the bottom 50% have grown 900 billion dollars poorer.”  That pattern of widening inequality has largely repeated across the world. It is the Grand Slam of Neoliberalism, and it just keeps on going and growing.

Politically, the neoliberal agenda is a kissing cousin to Republican talking points, arguing (1) raising taxes always kills growth (wrong- see next paragraph). And, (2) any form of government regulation is inefficient (wrong- see next paragraph). And, (3) raising wages always kills jobs, as businesses cannot afford to pay higher wages (wrong- see following paragraphs). These timeworn myths have hung in there like some kind of universal stamp of Good-Housekeeping approval ever since the Reagan administration. But, all three are stale myths, meaningless, false, make-believe storylines.

President Clinton’s administration raised the top income tax bracket for the first time since the 1950s. The economy posted slightly above average growth for the ensuing 5 years.

According to the Office of Management and Budget, between 2000 and 2010, the benefits of governmental regulations substantially exceeded the costs, “in fact, on average, the value of the benefits was about seven times the costs.” (Source: Is Government Regulation Really So Bad For Business? The Business Journal, Mar. 7, 2016)

Not only that, neoliberalism’s knee-jerk fix for middle class struggles coping with stagnate wage growth for 40 years is: (1) globalization (code word for moving jobs to the lowest common wage denominator) and (2) more austerity (code word for cutting social programs to finance tax cuts for the rich). According to Hanauer, the twin forces of globalization and austerity were the problem in the first instance, undermining the entire middle class.

Therefore, with neoliberalism ingrained into the world economic fabric, as it beats down labor while celebrating corporate over-lordship’s legal status as a “person”, what is a society to do?

Hanauer argues that America needs new economics. Toss out neoliberalism. For starters, he claims a growing number of academics and practitioners have concluded that neoliberal economic theory is “dangerously wrong.” Thus, for decades “bad economic theory” has resulted in massive inequality throughout the world accompanied by disruptive political instability. As such, neoliberalism is inherently self-destructive and, by default, it morphs into a replica of 18th century absolutism with power vested in one or more rulers or despots as a final remaining beachhead for its survival.

Further to the point, neoliberalism is a “backwards approach to economics because it isn’t capital that creates economic growth.” It’s people that create economic growth. And, “it isn’t self-interest that promotes the public good.” It’s reciprocity. And, “it isn’t competition that creates prosperity.” It’s cooperation. Yet, neoliberalism is tethered to capital creation as the engine for growth, self-interest as the fuel for growth, and competition as the determinate of success.

A new economics brings innovation as the process by which we solve human problems, and according to Hanauer, it involves five rules:

“The credibility of neoliberalism’s faith in unfettered markets as the surest road to shared prosperity is on life-support these days. And well it should be. The simultaneous waning of confidence in neoliberalism and in democracy is no coincidence or mere correlation. Neoliberalism has undermined democracy for 40 years.” (Source: Joseph E. Stiglitz, The End of Neoliberalism and the Rebirth of History, Nov. 4, 2019)

According to Stiglitz, the only way forward to “save our planet and our civilization” is a rebirth of history by revitalizing the Enlightenment and recommitting to its essential value propositions of freedom, respect for knowledge, and democracy. After all, the Enlightenment provided the philosophical basis of the American Revolution as a blueprint for a democratic society. It’s the rebirth of history that Stiglitz prescribes to fix the failures of neoliberalism.

Otherwise, very powerful political consequences of the neoliberal world will continue on a path of self-destructive absolutism with people ultimately pushing back by hitting the streets, like today in Chile, Hong Kong, France, Iraq, Haiti, Lebanon, Spain, Bolivia, and Ecuador.

What do these global protests have in common?

In all cases, price increases for key basic services have proven to be the final straw for people who have long felt shut out of opportunity. For example, in Ecuador protestors stormed parliament over discontinuation of decades-old fuel subsidies as part of an austerity program to cut public spending, insisted by the IMF. A hike in transport prices also sparked massive protests in Chile. In Lebanon a plan to tax WhatsApp prompted wider protests about general economic issues of inequality and corruption, an interesting feature found in all street protests these days as single issues blossom into full-blown universal demands for a fair share.

As it happens, the world has become a tinderbox with seemingly minor changes in policies such as transport taxes prompting massive demonstrations. Ordinary citizens hit the streets in outpourings of years of pent-up economic oppression, tired of “just getting by” or “not getting by at all.” Massive, continuous demonstrations in the streets around the world bespeak a universal threat that neoliberalism’s self-immolation will grow worse and worse if it continues its horribly stale rotted emphasis on globalization and austerity of social programs as the answers for progress. It’s backfiring.