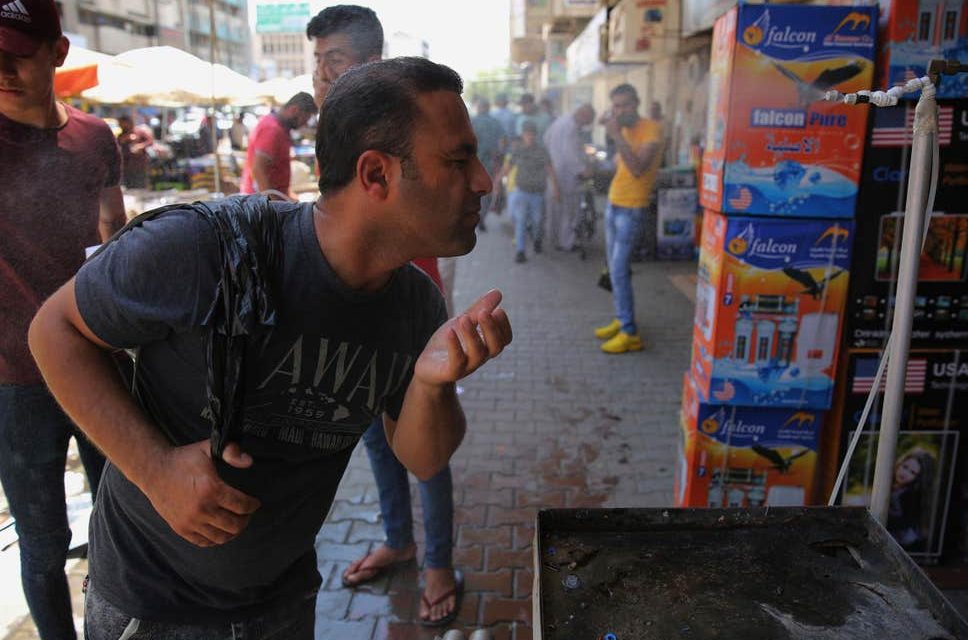 Written by Richard Hall / The Independent

Baghdad offers a troubling glimpse into a future where only the wealthy are equipped to escape the effects of climate change, Richard Hall writes

“It’s death,” says 17-year-old Muhammad, as he swelters behind the counter at the hardware store where he works in central Baghdad.

The temperature is 48C and there is no escaping it. The electricity is out in his neighbourhood and he can’t afford a generator to power an air conditioner. And it’s more of the same at home.

“I wake up during the night covered in sweat,” he says, in a low voice. “It’s exhausting. The heat makes you feel awful.”

Iraq is used to the stifling summer heat, but the few tools its residents have at their disposal to stay cool are becoming unaffordable for the country’s poor.

At a time when European countries are enduring some of the highest temperatures ever recorded, and as extreme weather becomes more common, Baghdad offers a troubling glimpse into a future where only the wealthy are equipped to escape the effects of climate change.

A United Nations report released last month warned that the world is heading for a “climate apartheid” scenario, “where the wealthy pay to escape overheating, hunger and conflict while the rest of the world is left to suffer”.

In Baghdad, that is already a reality. On 48C days, which are now coming earlier in the year, air conditioners are the most effective way of staying cool. But an electricity crisis in the country is putting even that essential tool out of reach to low-income families.

The crisis – caused by a combination of corruption, mismanagement and a creaking national grid – has exacerbated the country’s energy divide. The result is a huge gap between electricity supply and demand, especially in the summer. A diesel generator can be used to meet some of the shortfall, but running an air conditioner from a generator is a luxury only a few can afford.

“The electricity is completely unpredictable,” says Abu Ahmed, a metal shop owner just down the street from Muhammad. “Sometimes it comes on at 10am and lasts all day, sometimes it’s only one hour. The air conditioner is out of the question without the government grid.”

Abu Ahmed pays around £50 a month to run a generator that gives him a supply of four amps of electricity. That is all he can afford. If he goes over the allotted amps, the power turns off.

“I can run the fridge and the lights, that’s all,” he says. “I can’t sleep at night and I’m always sweating.”

Iraq’s electricity crisis may be a local problem, but the inequality of keeping cool is a global issue that is likely to become more relevant as temperatures rise.

Professor Philip Alston, the UN’s special rapporteur on extreme poverty and human rights and author of the “climate apartheid” report, says the lives of the world’s poorest will be at risk.

“The ever-higher record temperatures that will be recorded in Iraq and around the world will put vast numbers of vulnerable individuals at grave risk. Children, older persons, those who are already ill or are just not very strong, will all be at risk of dying from excessive heat,” he tells The Independent.

“The only way for some of these to get a degree of protection will be from air conditioning. But that costs money both for the system or the equipment as well as for electricity. The poorest people will often have neither access nor the money needed to have access to such relief.”

Iraqi cities have some advantages over Europe when it comes to dealing with extreme temperatures. Its neighbourhoods and homes were designed with the heat in mind. Narrow streets carry the wind through tall windows, cool air flows up from the basements in older houses.

As the recent heatwaves in Paris, London and Berlin have shown, European countries are significantly less well-equipped to deal with these higher temperatures.

Last month’s record-breaking temperature of 38.7C in the UK prompted apocalyptic headlines, transport chaos and a spate of government health warnings – and for good reason.

High temperatures in Europe are usually accompanied by a spike in deaths, usually among the elderly and people with heart and lung conditions. In 2003, a heatwave caused an additional 70,000 deaths across the continent. The British parliament’s Environmental Audit Committee has warned that Britain faces 7,000 heat-related deaths every year by 2050 unless action is taken.

As it stands today, Europe is ill-prepared. The IEA estimates that less than 5 per cent of European households are air-conditioned, but it adds that air conditioning could become one of the top drivers of global electricity demand within a few decades.

The UK’s Met Office describes heatwaves as “extreme weather events,” but adds that with climate change they are likely to become more frequent. Its own projections show that heatwaves could occur on average as regularly as every other year by the middle of the century.

The rise in temperature is likely to have an impact on how we work, too. According to the International Labour Organisation, the best-case scenario predictions for the level of warming would result in a 2.2 per cent reduction of global working hours due to heat stress by 2030, the equivalent of 80 million full-time jobs.

But as Europe considers a future of climate crises, here again, Iraq is years ahead. Muhammad, the hardware store worker, knows very well how the heat can stop you in its tracks.

“This job is easy, I don’t move around so much. But it takes an extra effort to do anything. Other jobs, like labouring, is much more difficult.”

And while European countries may at least have the time and means to adapt, Iraq is fast approaching an environmental disaster.

A 2018, report produced by a group of academics from the EastWest Institute and the Stockholm International Peace Research Institute (SIPRI) described Iraq as “one of the Middle East’s most climate-vulnerable countries”.

“Climate change is currently manifesting itself in prolonged heat waves, erratic precipitation, higher than average temperatures and increased disaster intensity,” the report says, adding a prediction that the country’s mean annual temperature will increase by 2C by 2050.

“Fifty degrees is very dangerous if you’re out in the open. For the poor it is even more dangerous. They have no air conditioning to cool down.”

According to Hamed, there are things the government can do to deal with the extreme heat.

“The ideal solution is to make more vegetation, which can lower temperatures. And we need to remove all the factories and old technology,” he says.

But despite Iraq’s massive oil wealth, corruption is hampering reform and Iraqis are furious. Last summer, deadly protests erupted in the southern city of Basra over the government’s inability to provide reliable electricity and water. The government has promised to invest billions in improving the national grid, but few have noticed the difference so far. Protesters have been back on the streets this year in anticipation of another sweltering summer.

“We expect the future climate of Iraq to be very dangerous,” Hamed, says. “I expect that if the issue isn’t fixed, it will bring down the government.”

Fauci As Darth Vader Of The COVID Wars