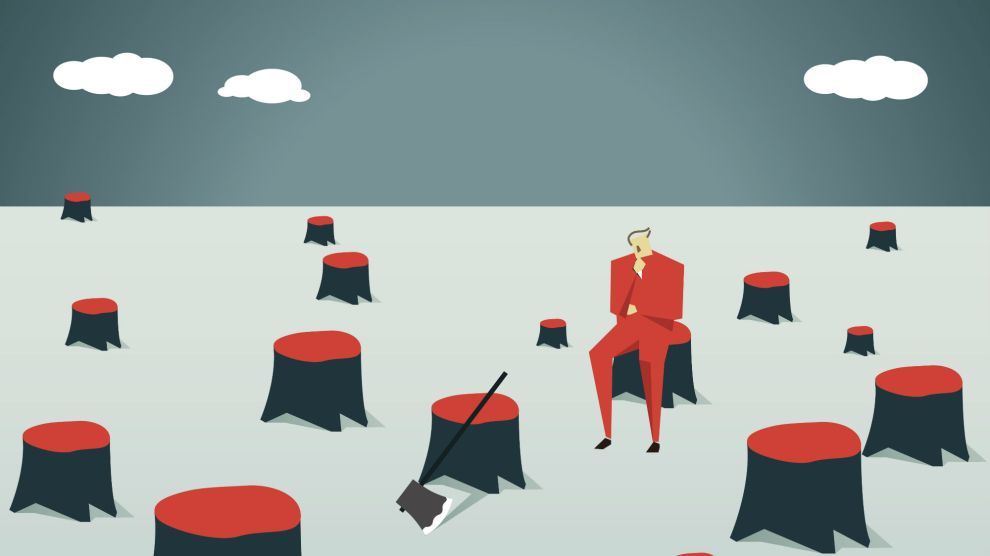 The UN report says we just have to stop cutting them down.

Every year, an estimated 15 billion trees are chopped down across the planet to make room for agricultural and urban lands and other uses. We’ve cut down so many, in fact, that what’s left is about half of the number of trees that the Earth supported before the rise of human civilization, and scientists warn that it’s not helping our climate. Planting more trees is one way to offset deforestation. But now, a report from the United Nations’ Intergovernmental Panel on Climate Change finds that to have a shot at combatting the climate crisis, among other efforts, we’ll need to cut down fewer trees to begin with.

Global deforestation is a major source of greenhouse gas emissions. Of all the land-use-related carbon dioxide emissions between 2007 and 2016—between 2.6 and 7.8 gigatonnes of carbon dioxide yearly—most of it comes from deforestation, the IPCC report’s authors estimate. And, as my colleague Rebecca Leber explains:

The way we eat, farm, and cut down forests contributes in a major way to the climate problem. Deforestation, agriculture, and other land use are already responsible for 23 percent of the rise in human-caused greenhouse gases, and agriculture is responsible for 44 percent of methane emissions. Those numbers will certainly grow without changes in land management—changes like growing forests and improving soil’s carbon capture with more native plants and crops.

One partial solution to the effects of deforestation is simply to plant more trees. Last year, the IPCC estimated that we’d need to plant 1 billion hectares of forest by 2050 to keep the globe from warming a full 1.5 degrees Celsius over pre-industrial levels. And in a recent, controversial study published in the journal Science, researchers based in Switzerland, Italy, and France concluded that doing so would be “undoubtedly achievable” and restoring forests worldwide could cut atmospheric carbon by a massive 205 gigatonnes. Critics of the study described the idea of a major tree-planting effort as somewhat impractical and unrealistic, but for others, it was “setting the limits,” as one researcher told Mother Jones.

Thursday’s IPCC report didn’t exactly advance or refute the findings of the Sciencepaper. It did, however, underscore the fact that planting trees will be part, by necessity, of any climate solution. But its authors note that “there are limits” to afforestation—planting trees in new places—and doing so potentially has some drawbacks. “Widespread use at the scale of several millions of km2 globally could increase risks for desertification, land degradation, food security and sustainable development,” the authors write. For example, tree planting could push agricultural operations onto less-suitable land, the New York Times reports.

“We cannot plant trees to get ourselves out of the problem that we’re in,” Pamela McElwee, a professor of human ecology at Rutgers University and an author on the report, told the Times. “The trade-offs that would keep us below 1.5 degrees, we’re not talking about them. We’re not ready to confront them yet.”

Climate mitigation efforts like planting trees may be a long-term and an admittedly quixotic solution, but there is also the option of slowing down or putting a halt to deforestation. “I do think eliminating deforestation is more important than planting new forest,” says Stanford University professor Rob Jackson, who chairs the Earth System Science Department and Global Carbon Project and is an author of a forthcoming study on the ability of forests to store carbon as more CO2 enters the atmosphere. But “it’s not an either-or, of course,” he says. “We can do both.”

When trees are cut down, he says, it can release years of a forests’ stored carbon back into the atmosphere. Given Brazil’s President Jair Bolsonaro’s determination to cut down parts of the Amazon rainforest, Jackson says focusing on deforestation is “especially critical” now.

“Forests provide many benefits beyond storing carbon,” Jackson says. “They store and recycle our water, they prevent erosion, they harbor biodiversity. There’s a legion of reasons to protect forests, especially in the tropics. When we plant forests, we gain some of those benefits, but it takes years to decades to grow a healthy forest.”

Polar Warning: Even Antarctica’s Coldest Region Is Starting to Melt