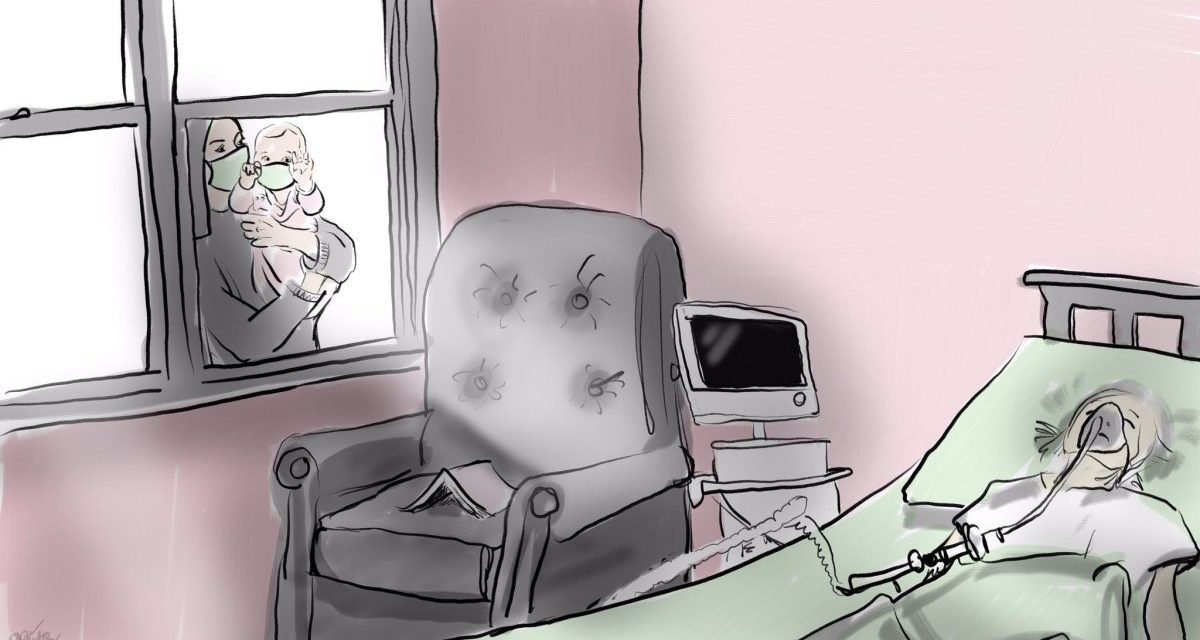 I mean, we’re in the first moments of an unfolding pandemic which, from what I can tell just looking at the numbers, is about to change the world in some pretty significant ways. Governmental faceplant after governmental faceplant after missed opportunity after missed opportunity all around the world appears to have set us on a trajectory toward overburdened healthcare systems, severe economic downturns, and, of course, mass deaths.

And maybe chaos. And maybe healing. And maybe, when all is said and done, a total restructuring of power and the way we do things.

Standing on the precipice of that, how the hell am I supposed to write about how Bernie didn’t go hard enough at Biden in the last debate or whatever? So many of the arguments we’ve been placing so much importance on lately could easily look irrelevant in a matter of weeks.

Anyway, here are nine thoughts on COVID-19 and what’s coming.

My job is literally to monitor and compare global policy responses to coronavirus, and this is categorically untrue.
Countries that are doing it better include: Sth Korea, Taiwan, Hong Kong, Singapore, China (after the first month of lies and obfuscation), Austria and Australia https://t.co/4xpS7qodjL

1 – Everyone in conspiracy circles has strong opinions about what’s going on, so anything I could possibly say about this is going to get a ton of pushback from some faction or another. That’s fine. In my opinion the fears that the ruling class will seize this opportunity to advance preexisting authoritarian agendas are well-founded, and people are right to have suspicions about the official narrative on the origins of the virus, but people who are still saying the whole thing is fake from top to bottom and it’s just another flu/no big deal have been proved wrong by facts in evidence. People should minimize social contact to avoid overburdening healthcare systems and thereby killing people. No matter how certain you are that this is all fake, you’re not certain enough to justify needlessly risking lives.

2 – Google-owned YouTube has just announced that they’re going to be censoring a lot more videos during the pandemic, citing the need to rely on automated censorship as they scale back workers’ presence at the office. No attempt has been made to explain why YouTube staff can’t just review the material working from home. Definitely worth keeping an eye on; if widespread authoritarian measures are going to be implemented during this time, increasing internet censorship will likely be the first step.

3 – I think this is going to hit America much harder than other countries, unfortunately. Combine a literal joke of a healthcare system with a president who up until just today has been dismissive of the threat the virus poses, the fact that the majority of Americans can’t afford a $1,000 emergency expense at a time of mounting layoffs while being chronically uninsured or underinsured, an inability to make anything happen without massive corporations voluntarily going against their own profit margins, a culture of rugged individualism with a reflexive distaste for collectivist organization for the good of the whole, and a highly religious population with many preachers telling their underinsured parishioners to demonstrate their faith by gathering at the megachurch and shaking hands with everyone, and you’ve got a recipe for disaster.

Please stay as safe as you can.

How did China 🇨🇳 beat coronavirus⁉️
One of China’s creative techniques was the ❝Disinfection Tunnel❞ which was invented & manufactured in days, NOT years.

4 – Meanwhile China is having success getting the pandemic under control on its end, with its government’s ability to build hospitals and crank out brand new tech solutions with astonishing swiftness, and of course to clamp down on the public’s free movement as soon as it was deemed necessary. Now Beijing is moving into a world leadership position in tackling the pandemic, stepping in to aid nations which can’t get help elsewhere like Italy and Serbia.

5 – The US became a superpower after being left intact while competing nations were stuck rebuilding themselves from two devastating world wars, allowing it to surge ahead of the competition. China, as we’ve discussed here many times, has been poised to overtake America as the dominant world power, so it’s possible we’ll see China’s relative success and America’s relative failure on this front dance in a way which gives a significant boost in that direction in the same way the US was given a boost by the world wars. It’s very likely China comes out of this notably further along in its agenda to create a multipolar world than before this all began.

6 – And the US of course realizes this threat, which is why my social media notifications right now are full of propagandized human livestock bleating about China being the Latest Official Bad Guy who I absolutely must believe very bad things about. A dying empire knows it’s going to need to take some drastic, dangerous measures to secure world dominance in the face of a surging contender, and it knows it needs to manufacture consent for those drastic, dangerous measures. Anti-China propaganda has been pouring into mainstream consciousness with more and more aggression lately, first and foremost within right-wing echo chambers but also within mainstream liberal ones – Joe Biden compared the Chinese government to Jack the Ripper just last night.

The result has been rank-and-file westerners beginning to lose their minds about China, which has looked exactly like a right-wing mirror of the Russia hysteria we watched unfold throughout late 2016 and early 2017. I have been encountering far more hysterical anti-China sentiment online than I was even a week or two ago; a poll published at the beginning of this month reports US anti-China sentiment is at a 20-year high, and I’ll wager if they took it again today it would be significantly worse.

People are now constantly shrieking about how authoritarian the Chinese government is, which is stupid, because China has always had an authoritarian government. It hasn’t changed; the only thing that’s changed is the narrative management, with glaring adjustments like the mass media reporting on the Hong Kong protests vastly more than the anti-government demonstrations in US empire-aligned nations like France. All this irrelevant emphasis on where the virus originated isn’t there to protect you from the virus, it’s there to make China look bad. China is no more of a threat to you than it was two years ago; the only thing that’s changed is you’re now being hammered with narratives about how threatening it is. Mass media converging upon a single empire-targeted nation is never a good thing.

7 – It’s interesting how the virus which might knock down the most powerful government in the world behaves so much like that government: dominating world affairs and killing the most vulnerable members of the populations it attacks. Nations which are being smashed with US sanctions have already been watching their frail and elderly die of inadequate medical care and malnutrition, and now with the coronavirus they’re experiencing those same exact effects squared. Which is why places like Iran are being hit so uniquely hard. America is like if COVID-19 was a country.

8 – Also interesting is watching people react to the way so many of the corporate and government policies which have been causing ordinary human beings to suffer great pains are now simply being canceled all around the world in response to the pandemic. This Slate article documents a number of the changes which have been made just in America, like how for people being thrown in jail for minor offenses, “San Antonio is one of many jurisdictions to announce that, to keep jails from being crowded with sick citizens, they’ll stop doing that. Why were they doing it in the first place?” Or how “Trump has instructed government agencies who administer loans to waive interest accrual for the duration of the crisis. But why on earth is our government charging its own citizens interest anyway?”

We’re seeing immense burdens lifted from people with an easy “Oh, that’s making the pandemic worse? Okay we’ll stop that then.” And we’re seeing people react with fully justified indignation with, “Well why were you doing that to me in the first place??”

And the answer is very simple: because until now, your suffering wasn’t exacerbating a virus which does not discriminate on the basis of class. Politicians and billionaires are just as capable of losing their lives and loved ones to this virus as anyone else, as the CEO of Universal Music Group just learned with his COVID-19 hospitalization. Simply not causing needless human suffering wasn’t enough to get them to stop crushing people; it had to actually show up on their doorstep to make a difference.

9 – I have long thought that it would be awesome if the world could just take a nap for a minute. Capitalism is built around the glorification of busyness. We’re going to find out how many jobs we can do from home, how many jobs are only busywork, how many jobs we can comfortably consolidate or do without completely, and how many jobs are actually harmful. A big chunk of jobs have nothing to do with feeding, housing or caring for us, and everything to do with persuading people that they are deficient in some imaginary way and require this placebo tonic snake-oil to make us better again. Religion is one such job. Advertising, marketing, and most media are others. If we redesign the economy, we could do away with those altogether and have all that creative effort go toward healthy things.

Primarily though, we all need a big rest from constantly doing such soul-draining things. Having to do this while under the worry that we won’t be able to pay our rent and bills is not ideal, but do as my Mum always says — worry about the things you can change, and for the things you can’t change right now, leave them for the birds. Leave the bills for the birds for now. We will work out something; we always do. But for now, you are safe and you have everything you need. Notice that. Once you’ve established that you’re solid in this moment at least, take this time to really dig as deeply in to relaxation as you can. Watch some stand-up and get yourself laughing, sing to some youtube karaokes, nap often and deeply, take showers and baths, really taste your food and enjoy your breath, yawn and stretch and cuddle and shake it all out. Forget about cleaning out the cupboards or learning that instrument or reading that book or whatever cute thing you decided you really should do now that you have the time — let your animal body lead the way, and give your brain a rest from all the shoulds and shouldn’ts. You’re fine just to do nothing at all. Sink in to that.