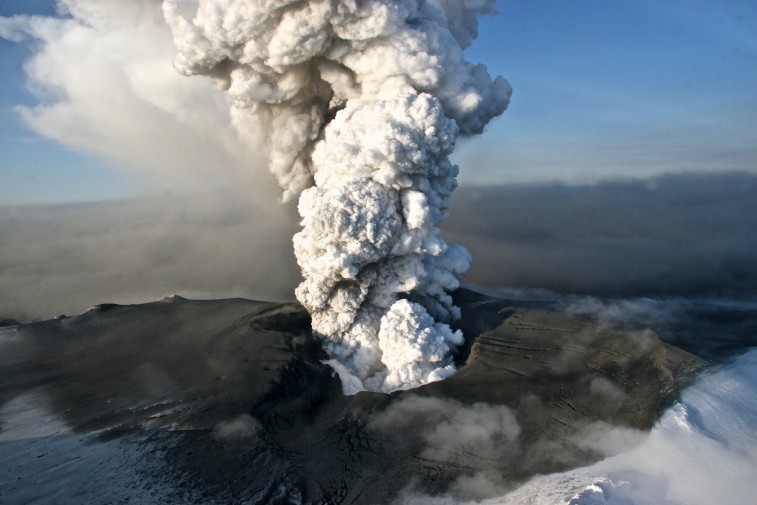 The following is an excerpt from From What Is to What If: Unleashing the Power of Imagination to Create the Future We Want by Rob Hopkins / Chelsea Green Publishing / October 2019. Reprinted with permission from the publisher.

Given the state of the world, the message of despair is pretty convincing. Things look grim. But something about that doesn’t sit quite right with me. In fact, there’s evidence that things can change, and that cultures can change, rapidly and unexpectedly. And that’s not just naïve, pie-in-the-sky thinking.

In How Did We Do That? The Possibility of Rapid Transition, Andrew Simms and Peter Newell tell the story of Iceland’s 2010 Eyjafjallajökull eruption, which sent fine dust into the sky that spread for thousands of miles and grounded most of the world’s planes. Then what happened? People adapted. Quickly. Supermarkets replaced air-freighted goods with local alternatives. People discovered other, slower ways to get around, or decided they didn’t really need to travel at all. People held business meetings online. The Norwegian prime minister, Jens Stoltenberg, ran the Norwegian government from New York . . . with his iPad. This isn’t the only example. We might be focused these days on how we are only nine meals from anarchy, but there are stories from throughout history about how rapid transitions lead to ingenuity, flourishing, imagination and togetherness.1

I’ve seen this with my own eyes, thanks to an experiment a few friends and I initiated more than a decade ago in our hometown of Totnes in Devon, England (population 8,500). Our idea was a simple one: What if, we wondered, the change we need to see in response to the biggest challenges of our time came not from government and business, but from you and me, from communities working together? What if the answers were to be found not in the bleak solitude of survivalism and isolation, in the tweaking of ruthless commercialism, or in the dream that some electable saviour will come riding to our rescue, but rather in reconnection to community? As we put it: ‘If we wait for governments, it will be too late. If we act as individuals, it will be too little. But if we act as communities, it might just be enough, and it might just be in time.’

As we began floating this idea with our friends and the wider community, the term ‘Transition’ arose to describe the intentional act of shifting from high resource use, high carbon dioxide (CO2) emissions, extractive business practice and fragmented communities to communities with a healthier culture, more resilient and diverse local economies, more connection and less loneliness, more biodiversity and more time, democracy and beauty.2

As ‘Transition Town Totnes’, we began asking these ‘what-if ’ questions, and things started unfolding apace in our town. People planted fruit and nut trees in public spaces, grew food at the train station, and connected neighbours who wanted to grow food with neighbours who had unused garden space. We crowdfunded to buy a mill – the first new mill in Totnes in more than a hundred years – to grind local grains and pulses for a range of flours, and we hosted an annual local food festival celebrating food grown in and very near to Totnes. As I write this, Transition Homes is building twenty-seven houses using local materials for people in need, and Caring Town Totnes has developed a network of caregiving organisations so they can work together more effectively. Through it all, we’ve held community conversations so people could come together to imagine and discuss the kind of future they’d like to create.

In 2013, we mapped the local economy with our Local Economic Blueprint and argued the financial case for a more localised approach to economic development.3 Our annual Local Entrepreneur Forum invites the community to support new businesses and has now helped launch more than thirty enterprises.4 Recently, some friends and I started a community-owned craft brewery, New Lion Brewery, which brews delicious beers using many local ingredients, often in collaboration with other emerging social enterprises.5 And early on, Transition Town Totnes created the Totnes Pound, a local currency that has inspired many other local currencies around the world. When people asked us, ‘Why do you have a £21 note?’ we asked, ‘Why not?’

Around the same time that we were mapping the local economy, Transition Streets brought together approximately 550 households in groups of six to ten neighbouring households. Each group met up seven times to look at issues such as water, food or energy consumption and to agree on actions they could take before the next meeting to reduce waste, cut costs, and develop community resilience. By the end, each household cut their carbon emissions by an average of 1.3 tonnes, saving around £600 a year.6

What was fascinating about Transition Streets was that when organisers asked participants what was most impactful about taking part, nobody mentioned carbon. Or money. They reported that they felt like part of the community, they felt as though they belonged, they knew more people, they felt connected. This has been true across the board. More important than any of the actual projects was the sense of connection, of feeling part of something, of the underlying story starting to shift. A collective reimagining of what the future could be. I began to see that our efforts were starting to become, at least in part, a different story our town told about itself. And in the process, our collective sense of what was possible began to shift. We discovered that if enough people came together, we could create an entirely new kind of story from the collective experiences of so many people trying to make good, and better, things happen in our community.

Part of the beauty of Transition is that it’s all an experiment. I don’t know how to do it. Neither do you. In Totnes, we were just trying to spark something that might unlock a creative spirit, a renewed sense of possibility, a fresh and hopeful way to think about the future, without any thought that it could spread to other places. But spread it did. As early as 2007, Transition groups started popping up in communities in the United States, Italy, France, Japan, Holland and Brazil. The Transition movement now exists in fifty countries and in thousands of communities. Every group is different, and emerges from the spirit and culture of the place. It’s a process that, from the outset, has invited and supported people’s creativity and imagination. It has also profoundly affected how I think about our world’s biggest problems.

What I saw ignite with the Transition movement taught me that we’re often looking in the wrong places for the solutions to our biggest threats. Yes, political action is a vital part of democracy, and can lead to very real change, but in addition to thinking we always need to campaign and lobby harder, design bigger and more disruptive demonstrations and rally more people through more online petitions, perhaps we need sometimes to stop, stare out of the window and imagine a world in which things are better. Maybe it’s time to recognise that at the heart of our work is the need for those around us to be able to imagine a better world, to tell stories about it, to long for its realisation. If we can imagine it, desire it, dream about it, it is so much more likely that we will put our energy and determination into making it reality. As my friend and mentor the late David Fleming wrote, ‘If the mature market economy is to have a sequel . . . it will be the work, substantially, of imagination.’7

To experience the Transition movement in Totnes and see it take off around the world made clear to me how prescient Fleming’s remarks were. Bringing about the world we want to live in, the world we want to leave to our children is, substantially, the work of the imagination, or what educational reformer John Dewey describes as ‘the ability to look at things as if they could be otherwise’.8 It seems a lot of people are reaching a similar conclusion.