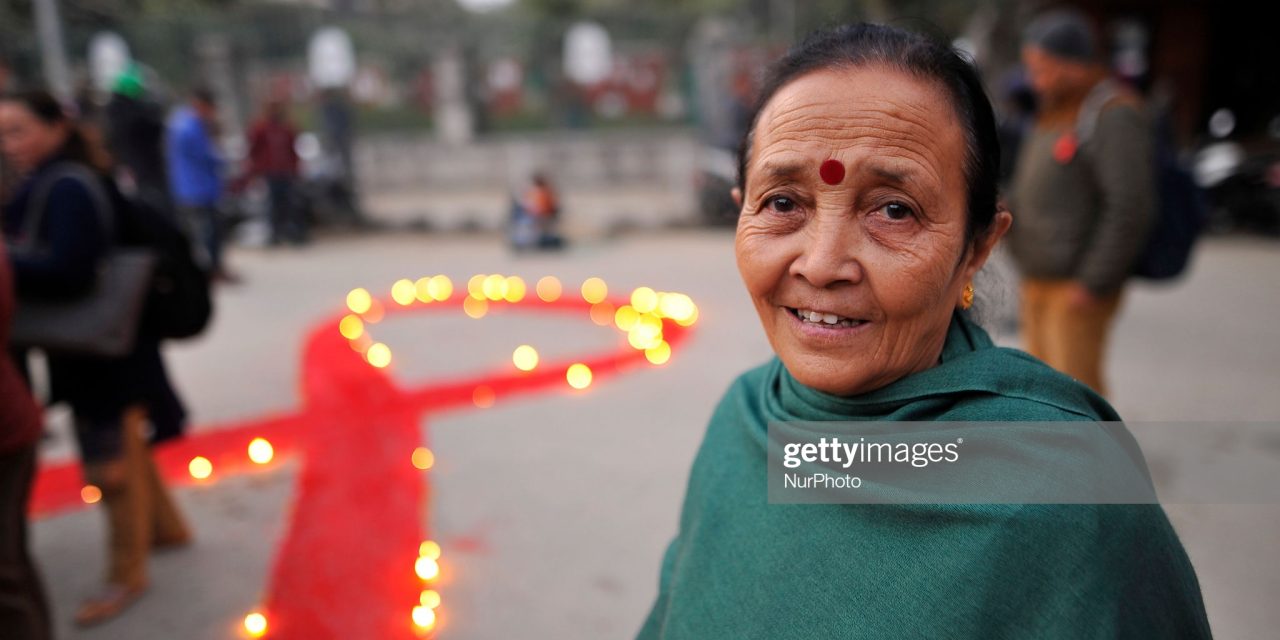 Anuradha Koirala, the founder of Maiti Nepal attends Eve of World AIDS Day celebrated in Kathmandu, Nepal on 1st Dec, 2017. World AIDS Day is celebrated worldwide on December 1st of every year to raise the awareness in the fight against HIV. According to the end of 2014 statistics of National Center for AIDS and STD Control, a total no. of 39,249 estimates affected patients identified in Nepal. (Photo by Narayan Maharjan/NurPhoto via Getty Images)

Inspired by Mother Teresa, Anuradha Koirala always knew she was destined to serve people. So she became a teacher, educating young children in Kathmandu, Nepal. But after two decades, she decided to pursue an even greater calling: protecting women and girls from abuse, trafficking, and exploitation.

On her morning walks past the Pashupatinath Temple in Kathmandu in the early 1990s, Koirala would regularly encounter women begging on the street. She was drawn to them and began to engage the women in conversation — they all told her that they had been victims of some type of gender-based violence, she recalled in her 2015 TEDx Talk.

Koirala was far too familiar with their pain, having suffered extreme physical abuse at the hands of her ex-husband.

“Every day, there was battering. And then I had three miscarriages that I think [were] from the beating. It was very difficult because I didn’t know in those days where to go and report [it], who to…talk to,” she told CNN in 2010.

Her decision to change careers was triggered by her traumatic personal experience.

Koirala began educating the women about gender-based violence and the empowerment of women. She offered to help them support themselves if they stopped begging on the streets.

At first, just eight women took her up on her offer, and she gave them 1,000 rupees each from her meager earnings to start small street shops. Through a portion of their profit — the two rupees that Koirala would collect from each of them daily — she was then able to provide security and economic opportunity to other women in need.

Soon after, she took her mission a step further, founding the nonprofit Maiti Nepal in 1993, through which she has served exploited women and children for the last 26 years. Throughout her career as a humanitarian and activist, she has specifically focused on tackling sex trafficking, a rampant industry that forces young girls from underprivileged communities across the India-Nepal border to be sold into sex slavery.

“These are poor regions with high illiteracy rates. If a relative or friend turns up offering someone a job, it is often the girls’ parents themselves who encourage them to go, without realizing what is really happening,”she told the Guardian. “It is the perfect breeding ground for traffickers.”

Maiti Nepal, which now caters to over 1,000 children, has grown to include three prevention homes through which at-risk girls are identified and educated on the dangers of trafficking. The organization also runs 11 transit homes that operate as immediate shelters for rescued girls, two hospices that treat women and children infected with HIV/AIDS, and a formal school.

Today, Koirala is 70 years old and, touted as Nepal’s own “Mother Teresa,” continues to fight against sex trafficking through her organization, which hosts a series of initiatives, including awareness campaigns, female empowerment programs, and skills training sessions for children and women.

Maiti Nepal, in collaboration with local law enforcement, regularly conducts rescue operations and patrols 26 points on the India-Nepal border in an effort to stop trafficking. The organization has saved over 18,000 girls since the founding of Maiti Nepal, Koirala said at the Global Peace Leadership Conference in 2012.

“When I see their pain — their mental pain as well as physical pain — it is so troubling that I cannot turn myself away. This gives me strength to fight and root this crime out,” she said in a phone interview with the Borgen Project.

Maiti Nepal also assists in the apprehension of trafficking criminals and has aided in the prosecution of over 700 traffickers.

While some survivors of sex trafficking are able to recover from their trauma and go on to live full lives, Koirala recognizes that not all are so lucky. Some survivors contract HIV, and require antiretroviral therapy to control the virus. The treatment can slow its progression and reduce the chances of transmission, so the organization also offers access to the treatment to affected women and children. Its two hospice centers provide those suffering from AIDS a safe place and comfortable place to live.

Koirala has been widely recognized for her work and has been awarded numerous local and international awards, including the Padma Shri, India’s fourth-highest civilian award. She was also named the CNN Hero of the Yearin 2010, for which she won $125,000 to further her work.

“I want a society free of human trafficking,” she added, as tears welled in her eyes. “I hope I will make it happen one day.”

‘Super Size Me 2’ Exposes the Truth About Fast Food Chicken