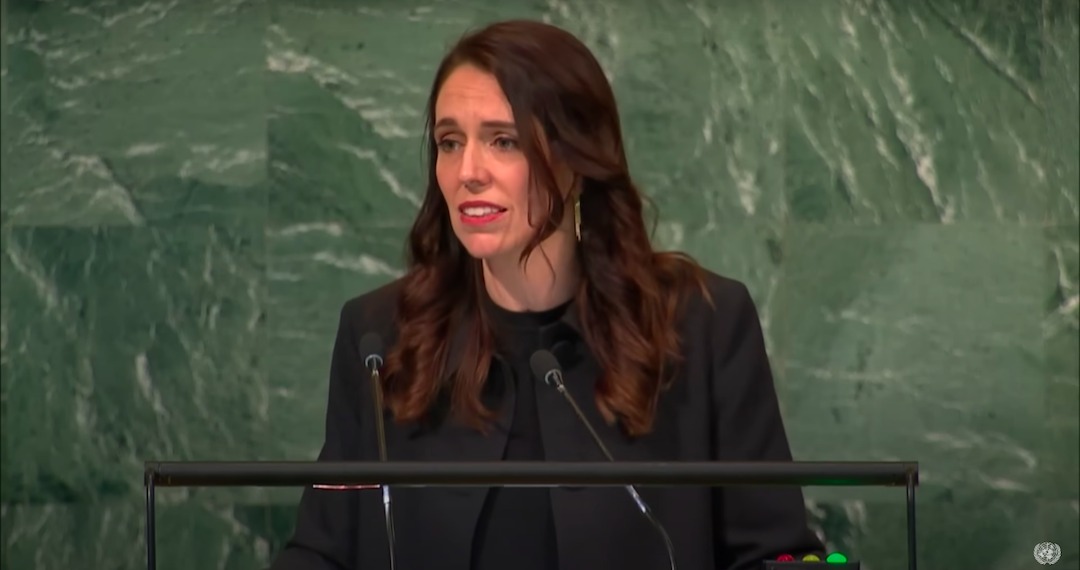 New Zealand’s prime minister Jacinda Ardern continued her crusade for the expansion of internet censorship during a speech at the United Nations General Assembly on Friday, this time using the war in Ukraine.

“Whether it’s climate, trade, health crises or seeking peaceful solutions to war and conflict, New Zealand has always been a believer in multilateral tools,” Ardern told the assembly, adding that “without reform, we risk irrelevancy.”

“There is perhaps no greater example of this than Russia’s invasion of Ukraine,” Ardern said. “Let us all be clear: Russia’s war is illegal. It is immoral. It is a direct attack on the UN charter, and the international rules-based system and everything that this community should stand for. Putin’s suggestion that it could at any point deploy further weapons that it has at their disposal reveals the false narrative that they have based their invasion on. What country who claims to be a liberator, threatens to annihilate the very civilians they claim to liberate? This war is based on a lie.”

Later in her speech, Ardern returns to the theme that Russia’s war is “based on a lie” to argue for the censorship of online speech which supports the idea that Russia is fighting for legitimate reasons in Ukraine.

Using the 2019 Christchurch terrorist attack as a segue to talk about the perils of online radicalization, Ardern then smoothly transitions to the subject of “mis- and disinformation” on the internet.

“This will also be important in understanding more about mis- and disinformation online: a challenge that we must as leaders address,” Ardern said.

“As leaders, we are rightly concerned that even those most light-touch approaches to disinformation could be misinterpreted as being hostile to the values of free speech we value so highly,” Ardern added, an acknowledgement of the grave human rights concerns inherent in having ‘leaders’ participate in the regulation of public speech. “But while I cannot tell you today what the answer is to this challenge, I can say with complete certainty that we cannot ignore it. To do so poses an equal threat to the norms we all value.”

Then it gets even creepier.

“After all, how do you successfully end a war if people are led to believe the reason for its existence is not only legal but noble?” asks the prime minister. “How do you tackle climate change if people do not believe it exists? How do you ensure the human rights of others are upheld, when they are subjected to hateful and dangerous rhetoric and ideology? The weapons may be different, but the goals of those who perpetuate them is often the same. To cause chaos and reduce the ability of others to defend themselves. To disband communities. To collapse the collective strength of countries who work together. But we have an opportunity here to ensure that these particular weapons of war do not become an established part of warfare.”

This is the face of authoritarianism – even though it looks different than you were taught to expect. And it's the mindset of tyrants everywhere:

This is someone so inebriated by her sense of righteousness and superiority that she views dissent as an evil too dangerous to allow: https://t.co/kmG4zTgPwh

Ardern’s remarks are currently getting a lot of criticism in right-wing circles due largely to her suggestion that online discourse about climate change needs to be regulated so that the issue can be properly addressed. And to be sure that is an absolutely insane thing for her to say; I believe climate change is real and anthropogenic and I find the idea of silencing people who disagree with me about that unthinkably nightmarish. This is a line of thinking that can only arise from a profoundly tyrannical mind.

But what isn’t getting enough attention at this time is the fact that Ardern is calling for an increase in the already outrageous amount of online censorship we are seeing with regard to the war in Ukraine. She explicitly said the war is “based on a lie”, and then went on to argue that people need to be stopped from circulating speech which lends credibility to that lie, even if such freakishly authoritarian measures may be “misinterpreted” as being hostile to free speech.

Ardern argues that online speech claiming that the Russian invasion of Ukraine is legal and noble makes it harder to attain peace, but of course she doesn’t really believe that, and neither does anyone else. The idea that free speech about the war could somehow hamper peace negotiations between governments is self-evidently absurd and completely nonsensical.

'Russian Propaganda' Is The Latest Excuse To Expand Censorship

"This isn't about RT, it's about the the agenda to continually expand and normalize the censorship of unauthorized speech."https://t.co/vpBRz0Id0w

In reality, this war is just the latest in a string of excuses we’ve been given by the western political/media class to censor the internet, with earlier justifications including Covid-19, election security, domestic extremism, and Russian propaganda again after the 2016 US election. But asserting that it’s important to stop people from thinking wrong thoughts about a war is a major escalation from all those other justifications, because they’re no longer pretending that it’s being done for our own good. Our wrongthink is the justification, in and of itself.

Which is a problem, because this is in fact an extremely dangerous proxy war being waged against Russia by the US and its imperial member states. It was absolutely deliberately provoked, it’s showing no sign of ending anytime soon, and its continual escalation threatens the life of everyone on this planet. The US has lied about every war it has ever been involved in, and if ever there was a war to bring scrutiny and skepticism to, it’s the one that is bringing us closer to a nuclear exchange than at any other time in history.

This notion that it is the job of “leaders” to involve themselves in regulating the ideas and information we’re allowed to share with each other online needs to be stomped out, dissolved in acid, and flushed down the toilet. That’s not their place. They shouldn’t even be looking in that direction, much less talking amongst themselves at the United Nations about how best they can go about doing it. It’s a profoundly dangerous notion that needs to be rejected with unadulterated aggression.

Free speech is not a “weapon of war”. It’s free speech. Either let us have it or stop pretending you value it.