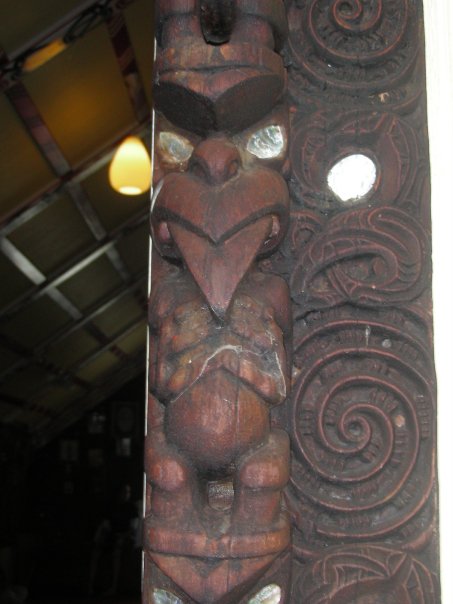 (* See the index below the article for Maori→English translations)

I parked my car out front of the Marae, not sure what to do, but knowing it wasn’t right for me to drive through. As the time of the hui (meeting) drew near, we walked down the gravel driveway to the back where a few people had gathered. “Come into the wharenui,” one of the women with a warm smile said to us. “It’ll be much warmer in there than waiting out here.” I was grateful to go in, it was cold and I felt awkward standing at the back door.

We walked through the wharekai and into the wharenui, stopping to take our shoes off first. There were kind eyes on us, watching as we nervously made our way to the seats like two Pakeha glow sticks. We knew some people there so made casual conversation as strangers came past, stopping to give us a hug and a kiss as they made their way over to their whanau members.

It was bewildering, but gentle and calming. We still weren’t sure what was going to happen, we were already in the wharenui, so the more formal pōwhiri wasn’t going to take place. I was equal parts disappointed and relieved. I’ve never experienced this custom, but here I was, already inside and being embraced by people I’ve never met.

Just as the hui was about to start, we were called over to the other side. We’d been sitting where the hapū sit, we were manuhiri so we had special seats. No one made a fuss over this, they just made space as we moved across the room and took our new places.

The formalities started. The kaumātua of the hapū spoke in Te Reo Māori about the purpose of the hui. I could understand parts, a few words here and there. He also welcomed us, taking care of the formality I was wondering about, and there was a waiata once he finished. I didn’t understand any of it, but I noticed the voice of one woman in particular, she sung like birdsong. One of our colleagues responded in Te Reo Māori and then we sang and giggled a bit because we sounded terrible.

Then I found myself up out of my chair, being greeted by each person with a hongi or a kiss and a hug, or all three in some cases. Each embrace was genuine, strong and warm. I was about halfway through the line of people when I realised I was becoming overwhelmed with emotion. I held it together and made it to the end, wiping a small tear out of my eye before anyone could see.

We were officially accepted onto the Marae. And then there was kai!

The food was plentiful and mostly homemade, hearty pumpkin and beef soup, buttered bread rolls and cakes for dessert. I took a seat quietly and hoped no one would notice I wasn’t eating. Being vegan and unable to eat sugar, I’m difficult to cater for, even for people who know I’m coming! I desperately didn’t want to offend and helped out with the dishes.

After kai and back in the wharenui, the hui took place. Everyone spoke English and anyone who wanted to had a chance to speak. After someone spoke, others would support their words by saying ka pai, or other supportive comments. No one spoke over another, everyone was given time and space to share whatever they needed to.

I found myself looking around the walls. They were covered in photos of whānau members who had passed away. Some of the photos and people were very old. Some looked young and healthy. As I wondered about each of them, I was also feeling their presence. It was comforting to see them there, still a part of everything going on in the living realm.

As the hui came to a close, we thanked our hosts for the opportunity to speak with them and for their hospitality. This was then acknowledged and a karakia was said. As we packed away our things, more hugging and kissing took place, business cards were swapped and agreements made to speak again soon.

There were many things that struck me throughout the evening. I was an outsider, a stranger to almost everyone who attended the hui, yet I was welcomed with open arms. I was treated with kindness and respect. The people there didn’t judge me. What I said and how I presented myself was taken on face value. There was no ego, no competition, and no need for anyone to prove anything. We had been invited to bring our message onto the Marae and we were given the space to do that.

I’d been invited into a world I’m not a part of. I felt foreign. I felt gratitude. I wondered why it’s taken me so long to have this experience, when it’s been a normal part of life for many hundreds of years. I wondered why we can’t open our hearts and minds more so we can treat others with the dignity we all deserve.

The meeting had actually been about difficult issues, housing, health and a constant lack of funding. But because of the kaupapa the hui was founded on, there was a willingness to discuss these challenging topics. Everyone’s viewpoint mattered and there were equal measures of people willing to help, as well as accept help. There was a silent strength in the room as people shared and supported each other.

As I was driving away, my feeling was similar to that of spending time with my family. My soul cup filled. My heart grateful for such acceptance. I took home a new perspective on a culture I thought I already knew. Turns out I know very little but would love to learn more and I’ll become a better person for it. This experience for me has brought to life a mantra I already believe in—‘Treat others the way you want to be treated yourself’, I just understand it better now.

R2P and the Palestinian Ordeal: Humiliating the UN