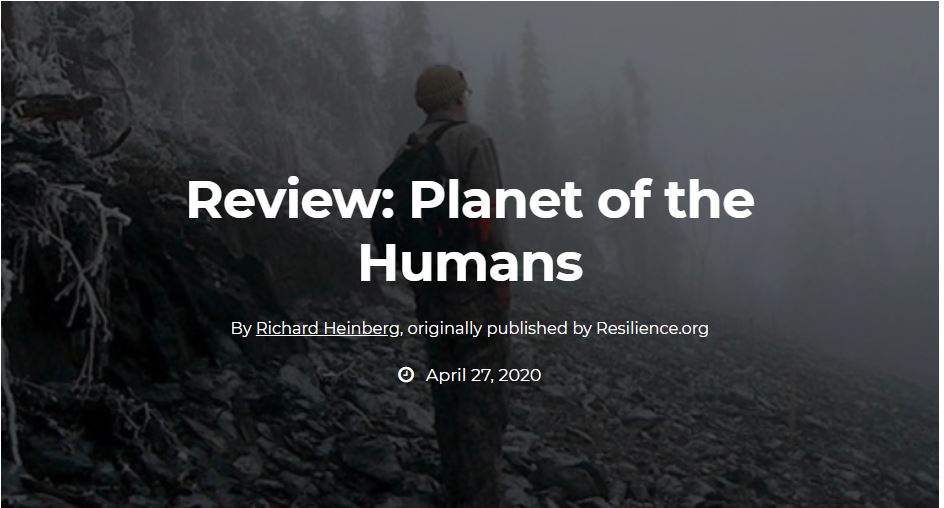 A few days ago, Emily Atkin posted a reaction to Michael Moore’s latest film, Planet of the Humans (directed and narrated by Jeff Gibbs), in which she began by admitting that she hadn’t seen the film yet. When writers take that approach, you know there’s already blood in the water. (She has since watched the film and written an actual review. Full disclosure: I’m in the film, included as one of the “good guys.” But I don’t intend to let that fact distort my comments in this review.)

The film is controversial because it makes two big claims: first, that renewable energy is a sham; second, that big environmental organizations—by promoting solar and wind power—have sold their souls to billionaire investors.

I feel fairly confident commenting on the first of these claims, regarding renewable energy, having spent a year working with David Fridley of Lawrence Berkeley National Laboratory to assess the prospects for a complete transition to solar and wind power.

We found that the transition to renewables is going far too slowly to make much of a difference during the crucial next couple of decades, and would be gobsmackingly expensive if we were to try replacing all fossil fuel use with solar and wind. We also found, as the film underscores again and again, that the intermittency of sunshine and wind is a real problem—one that can only be solved with energy storage (batteries, pumped hydro, or compressed air, all of which are costly in money and energy terms); or with source redundancy (building way more generation capacity than you’re likely to need at any one time, and connecting far-flung generators on a super-grid); or demand management (which entails adapting our behavior to using energy only when it’s available). All three strategies involve trade-offs. In the energy world, there is no free lunch. Further, the ways we use energy today are mostly adapted to the unique characteristics of fossil fuels, so a full transition to renewables will require the replacement of an extraordinary amount of infrastructure in our food system, manufacturing, building heating, the construction industry, and on and on. Altogether, the only realistic way to make the transition in industrial countries like the US is to begin reducing overall energy usage substantially, eventually running the economy on a quarter, a fifth, or maybe even a tenth of current energy.

Is it true that mainstream enviros have oversold renewables? Yes. They have portrayed the transition away from fossil fuels as mostly a political problem; the implication in many of their communications is that, if we somehow come up with the money and the political will, we can replace oil with solar and continue living much as we do today, though with a clear climate conscience. That’s an illusion that deserves shattering.

But the film does make some silly mistakes. Gibbs claims that a solar panel will generate less energy than it took to build the panel. That’s a misleading claim. Many teams of researchers have addressed the question of energy return on energy invested for solar power, and even the most pessimistic results (with which I mostly agree) say that the technology can yield a marginal energy gain. Much of that gain goes away if we have to “pay” for the energy investment entailed in providing batteries or redundant capacity. Wind power generally has a better energy payback than solar, but the location of turbines matters a great deal and ideal sites are limited in number. Assessing solar and wind power calls for complicated energy accounting, but the film reduces that complexity to a blanket, binary dismissal.

The film is low on nuance, but our global climate and energy dilemma is all shades of gray. Gibbs seems to say that renewables are a complete waste of time. I would say, they are best seen as a marginal transitional strategy for industrial societies. Given climate change and the fact that fossil fuels are depleting, finite resources, it appears that if we want to maintain any sort of electrical energy infrastructure in the future, it will have to be powered by renewables—hydro, wind, or solar. As many studies have confirmed, the nuclear power industry has little realistic prospect of revival. The future will be renewable; there simply isn’t any other option. What is very much in question, however, is the kind of society renewable energy can support.

The fact is that we’ve already bet our entire future on electricity and electronics. Communications and information processing and storage have all been digitized. That means that if the grid goes down, we’ve lost civilization altogether. I don’t think we can maintain global grids at current scale without fossil fuels, but I can envision the possibility of a process of triage whereby, as population and resource consumption shrink, the digital world does as well, until it’s small enough to be powered by renewable electricity that can be generated with minimal and acceptable environmental damage.

I agree with Gibbs, however, that renewables are realistically incapable of maintaining our current levels of energy usage, especially in rich countries like the US. Transitioning to electric cars may be a useful small-scale and short-term strategy for reducing oil consumption (I drive one myself), but limits to lithium and other raw materials used in building e-cars mean we really need to think about how to get rid of personal cars altogether.

Mainstream enviros will hate this movie because it exposes some of their real failings. By focusing on techno-fixes, they have sidelined nearly all discussion of overpopulation and overconsumption. Maybe that’s understandable as a marketing strategy, but it’s a mistake to let marketing consultants sort truth from fiction for us.

During recent decades, the big environmental orgs wearied of telling their followers to reduce, reuse, and recycle. They came to see that global problems like climate change require systemic solutions that, in turn, require massive investment and governmental planning and oversight.

But the reality is, we need both high-level systemic change and widespread individual behavior change. That’s one of the lessons of the coronavirus pandemic: “flattening the curve” demands both central planning and leadership, and individual sacrifice.

Planet of the Humans paints environmental organizations and leaders with a broad and accusatory brush. One target is Jeremy Grantham, a billionaire investment analyst who created the Grantham Foundation for the Protection of the Environment in 1997. Grantham was already a mega-rich investor before he “got religion” on environmental issues. I’ve had several face-to-face meetings with him (full disclosure: the Grantham Foundation has provided modest funding to Post Carbon Institute, where I work) and it’s clear that he cares deeply about overpopulation and overconsumption, and he understands that economic growth is killing the planet. He’s scared for his children and grandchildren, and he genuinely wants to use whatever wealth and influence he has to change the world. To imply, as the film does, that he merely sees green tech as an investment strategy is a poorly aimed cheap shot. Bill McKibben, who is skewered even more savagely, also deserves better; he has replied to the film here.

Finally, the film leaves viewers with no sense of hope for the future. I understand why Gibbs made that choice. Too often, “hopium” is simply a drug we use to numb ourselves to the horrific reality of our situation and its causes—in which we are all complicit.

Yet, however awful the circumstance, we need a sense of human agency. In the face of the pandemic, many of us are reduced to sitting at home sewing facemasks; it seems like a paltry response to a spreading sickness that’s taking tens of thousands of lives, but it’s better than sitting on our hands and saying “Woe is me.” The same goes for climate change: figuring out how to eat lower on the food chain, or how to get by without a car, or how to reduce home energy usage by half, or growing a garden might seem like trivial responses to such an overwhelming crisis, but they get us moving together in the right direction.

For all the reasons I’ve mentioned, Planet of the Humans is not the last word on our human predicament. Still, it starts a conversation we need to have, and it’s a film that deserves to be seen.

Editorial note: This article has been revised to change the description of Emily Atkin’s initial piece about the film from “review” to “reaction” and remove an erroneous assumption that she didn’t intend to watch the film.