US leaders have been threatening Iran for years, but US corporate media persistently and wrongly paint US escalations against Iran as defensive countermeasures.

George W. Bush said in 2008 that “all options are on the table” in terms of the policies the US will consider toward Iran, which was a way of saying that the US might militarily attack Iran—even a nuclear first strike would fit under “all.” (Oddly, when officials talk about “all options,” options that involve killing people seem to be the only kind they have in mind.) 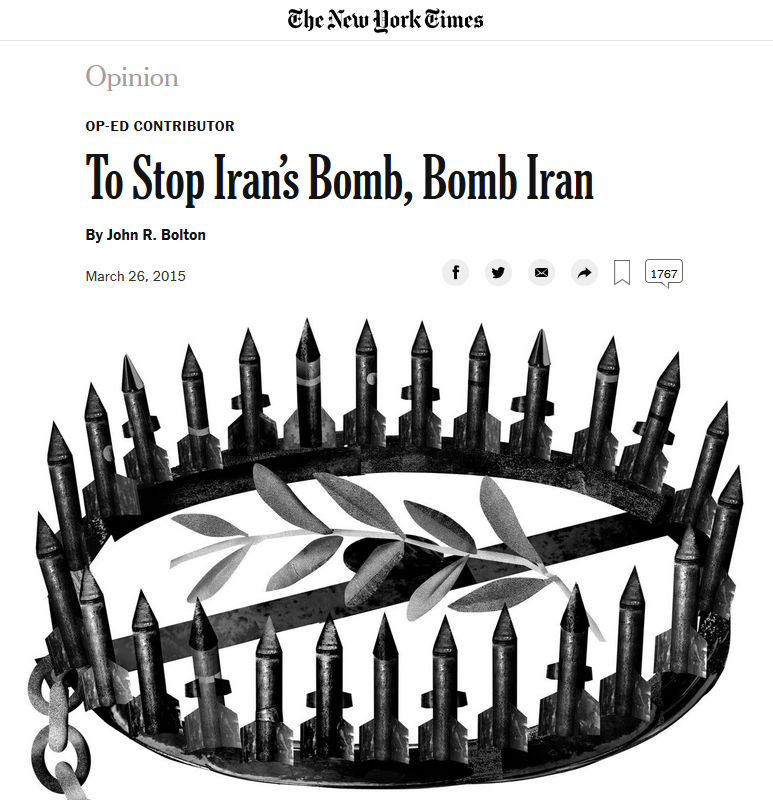 The current national security advisor wrote a column (New York Times, 3/26/15) urging the US to “bomb Iran”—yet media depict the US as a country being threatened by Iran.

President Barack Obama repeatedly made the same threat, vowing “we will do anything” to stop an Iranian nuclear weapons program that US intelligence agencies have long said Iran doesn’t have (FAIR.org, 10/17/17). Signing a nuclear accord with Iran did not end his administration’s belligerence, as Ben Rhodes, Obama’s deputy national security adviser for strategic communication, repeated the threat: “The president, this president or the next president, will have all options on the table, including military ones.”

John Bolton openly urged a military attack on Iran (calling for “a thorough job of destruction”—New York Times, 3/26/15), and President Donald Trump went on to appoint him national security advisor. Secretary of State Mike Pompeo said that, you guessed it, “all options” are on the table against Iran, including military ones. Recently Trump refused to rule out a war against Iran (“I don’t want to say no, but hopefully that won’t happen”).

Surrounding a country with military forces is also a threat. Major US military bases have encircled Iran. The US has ships, jets, drones and tens of thousands of soldiers on Iran’s doorstep—surely US media would see it as threatening if Iran deployed comparable forces to Canada, Cuba and the Gulf of Mexico. Further, the US has openly talked about drawing up plans to invade Iran.

The US has gone beyond making threats to actually carrying out attacks against the country. Sponsoring Iraq’s 1980 invasion of Iran and helping Iraqi President Saddam Hussein use sarin and mustard gas in that war, as the US did, is one example. Throttling Iran socio-economically, as the US is currently doing, is another.

Nevertheless, US media have persisted in ignoring this long record of US threats and hostile actions against Iran, casting Tehran as the aggressor in its conflict with the US.

The Hill (5/13/19) published an article under the headline, “B-52s Conduct First Mission of Counter-Iran Deployment.” The sources for the notion that Iran is doing something that the US needs to “counter” are such impartial observers as a statement released by the US Air Force Central Command (AFCENT) and comments from an AFCENT spokesperson.

The article moved on to treat those claims as if they merited no skepticism, branding the US’s intimidation from the sky a “response:”:

The B-52s were deployed to Al Udeid Air Base in Qatar last week as part of the US response to what the Trump administration described as “troubling and escalatory indications and warnings” for Iran.

From uncritically repeating the administration’s interpretation of Iranian conduct, The Hill went on to absorb that worldview, describing the US sending offensive weaponry to the Gulf as a “response” to some unspecified Iranian action: “As part of the Iran response, the Trump administration also sent the USS Abraham Lincoln carrier strike group to the region.”

A Foreign Policy headline (5/13/19) said “US Sends More Firepower to Counter Iran.” Apart from the unimpeachable word of the Pentagon, the sole proof offered for the claim that Iran is taking actions in need of “countering” is that

Tehran issued an explicit threat to the Abraham Lincoln, which transited through the Suez Canal. In the past, a US aircraft carrier would be a threat; now, it is a “target,” said Amirali Hajizadeh, head of the Revolutionary Guard’s air force.

However, the “explicit threat” can be read very differently from the way Foreign Policy suggests. Here are Hajizadeh’s remarks, quoted in Al-Jazeera (5/13/19), via the hyperlink in the Foreign Policyarticle:

“An aircraft carrier that has at least 40 to 50 planes on it and 6,000 forces gathered within it was a serious threat for us in the past. But now it is a target and the threats have switched to opportunities,” said Amir Ali Hajizadeh, head of the Revolutionary Guard’s air force.

“If [the Americans] make a move, we will hit them in the head,” he added, according to the Iranian Students’ News Agency (ISNA).

Foreign Policy’s article is written as though the second half of Hajizadeh’s statement—saying that Iran will defend itself if attacked by the large military force assembled on its borders—didn’t exist. It’s extremely misleading to call the statement as a whole an “explicit threat.”

ABC used the headline (5/24/19) “1,500 More Troops and Defensive Capabilities Headed to Middle East to Deter Iran.” How the US sending soldiers to the doorstep of a country that has not attacked it is “defensive,” or the evidence of the need to “deter” Iran, goes unexplained, an egregious omission when one considers that there is every reason to doubt US claims that Iran is about to attack the US. 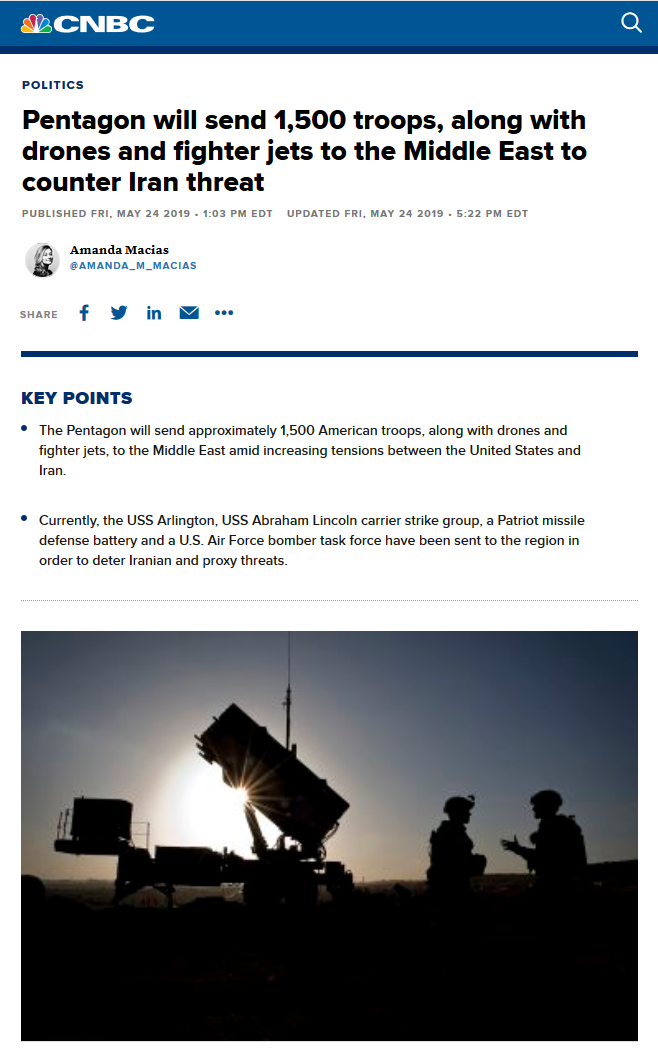 No matter how military armament the US sends to the other side of the world, it can always be described as a “counter” to a “threat” (CNBC, 5/24/19).

A CNBC headline (5/24/19) told readers that the “Pentagon Will Send 1,500 Troops, Along With Drones and Fighter Jets, to the Middle East to Counter Iran Threat.” CNBC presents US officials’ justifications for their military maneuvers as though they were facts:

Currently, the USS Arlington, USS Abraham Lincoln carrier strike group, a Patriot missile defense battery and a US Air Force bomber task force have been sent to the region in order to deter Iranian and proxy threats.

Rather than being the debatable claims of US officials, these “Iranian and proxy threats” are presented as flat descriptions of reality. The article functions as a sort of information-laundering service, turning state talking points into neutral pieces of data:

The movement of additional US forces to the Middle East is the Trump administration’s latest effort to pressure Tehran over its support for weapons proliferation and extremist groups in the Middle East.

What’s most remarkable about this piece is that its next two paragraphs describe US maneuvers that not only constitute a threat against Iran, but actual aggressive actions the US has taken against the country:

Additionally, the US designated Iran’s Revolutionary Guard as a terrorist group. Iran responded with threats to close the Strait of Hormuz, where about a third of the world’s oil export vessels pass. The US then announced it was expediting the deployment of a carrier strike group equipped with bomber aircraft to the region.

The article says that the US is “counter[ing]” the Iran “threat,” but offers no concrete evidence of such a threat. Meanwhile, specific hostile actions the US has taken against the country, including menacing troop movements and US government attempts to subvert the Iranian economy, are not depicted as a US threat against Iran.

Both the ABC and CNBC articles note that Vice Adm. Michael Gilday, the director of the Joint Chiefs of Staff, blamed Iran for attacks on Saudi Arabia’s oil infrastructure and for a rocket that landed near the US embassy in Baghdad. Neither piece notes that US officials have said they have no evidence that Iran was behind either drone attacks on the pumping stations or the sabotage of four oil tankers, two of which were Saudi, in the Persian Gulf. Nor did either report inform their readers that the US produced no evidence that Iran was responsible for the rocket in Iraq. (Yemeni Houthis, falsely depicted as pawns of Tehran, said they carried out attacks of Saudi oil pumping stations in retaliation for the Saudi/US/UAE/UK/Canadian invasion and immiseration of Yemen.)

Iran is a threat to US interests in the sense that Iran is a barrier to full-spectrum US domination of the Middle East. But there’s no evidence Iran will attack the US, which is how the word “threat” will generally be interpreted by consumers of news media.

The media’s false implication that Iran is a danger to the population of the United States makes US escalations against the country appear necessary and justified, and reduces the likelihood that a sufficient number of US citizens will mobilize to stop the potential and actual harm being inflicted in their name.

The Empire’s War On Oppositional Journalism Continues To Escalate

Revolution needs to create an Evolution