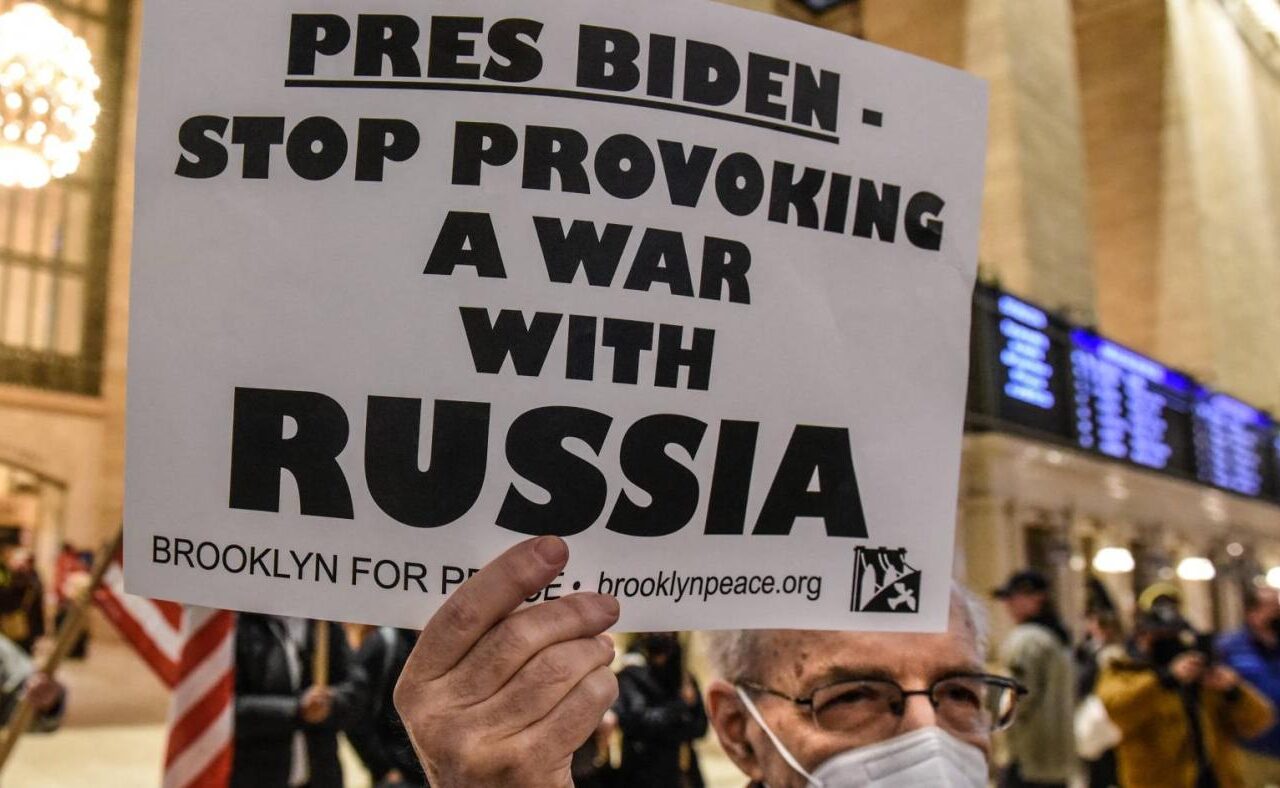 People hold signs and participate in a protest in Grand Central Station in the borough of Manhattan against war in Ukraine on 19 February, 2022 in New York City (AFP)

How convenient for western leaders that every time another country defies the West’s projection of power, the western media can agree on one thing: that the foreign government in question is led by a madman, a psychopath or a megalomaniac.

At a drop of a hat, western leaders are absolved of guilt or even responsibility for the terrible events that unfold. The West remains virtuous, simply a victim of the world’s madmen. Nothing the West did was a provocation. Nothing they could have done would have averted the disaster.

The US may be the most powerful state on the planet by far, but its hands are apparently always tied by a deranged, implacable foe like Russia’s Vladimir Putin.

Putin, we are told, is not advancing any rational – from his perspective – geopolitical or strategic interest by invading his neighbour, Ukraine. And so no concession could or should have been made because none would have prevented him from acting as he has.

The West, meaning foreign policy hawks in Washington, gets to decide when the timeline of events started, when the original sin occurred. The compliant western media give their blessing, and our hands are washed clean once again.

The subtext – always the subtext – is that something must be done to stop the “madman”. And because he is irrational and a megalomaniac, such action must never be framed in terms of concessions or compromise – that would be appeasement, after all. If every enemy is a new Hitler, no western leader will risk a comparison with Neville Chamberlain.

Instead, what is needed urgently, western politicians and media agree, is the projection – whether overtly or covertly – of yet more western power and force.

The US and British invasion of Iraq nearly two decades ago is a particularly pertinent and telling counterpoint to events in Ukraine.

Then, as now, the West was supposedly faced with a dangerous, irrational ruler who could not be made to see sense and was unwilling to compromise. Saddam Hussein, western leaders and their media insisted, had allied with his arch-enemies in al-Qaeda, the perpetrators of the Twin Towers attack of 9/11. He had weapons of mass destruction, and could launch them towards Europe in 45 minutes.

Except, none of that was true – not even the madman bit. Saddam was a hard, cold, calculating dictator who, like most dictators, kept himself in power through a reign of terror over his opponents.

Nonetheless, the western media faithfully amplified the tissue of evidence-free claims – and patent lies like that preposterous alliance with al-Qaeda – concocted in Washington and London to usher in the illegal 2003 invasion of Iraq.

United Nations inspectors could find no trace of stockpiles of Iraq’s former biological and chemical weapons arsenal. One, Scott Ritter, went unheard as he warned that any possessed by Saddam would have turned to “harmless goo” after many years of sanctions and inspections.

The improbable 45-minute claim, meanwhile, was not based on any kind of intelligence. It was lifted straight from a student’s speculations in a doctoral dissertation. Iraq’s invasion by the US and Britain was not only illegal, of course. It had horrifying consequences. It led to the likely deaths of around a million Iraqis, and spawned a terrifying new kind of nihilistic Islamism that destabilised much of the region.

Those interests, of course, were largely concealed because they were so ignoble, flagrantly violating the so-called “rules-based order” Washington claims to uphold. But despite being an unmitigated catastrophe, the US-led invasion of Iraq was no more “irrational” than Putin’s current invasion of Ukraine. Washington’s neoconservatives advanced what they regarded as US geopolitical interests and a strategic vision for the Middle East.

What the neoconservatives wanted was variously to control Iraq’s oil, to eliminate regional pockets of resistance to its own and its client Israel’s hegemony in the Middle East, and to expand the region as an economic market for US goods and weapons.

Saddam fell into the trap set for him because he was equally motivated by his own narrowly defined “rational” self-interest. He refused to admit he had no meaningful weapons systems left after the western sanctions and inspections regimes because he did not dare to look weak, either to his own population or to hostile neighbours like Iran.

The western media’s refusal to consider the real motivations on either side – the neoconservatives’ in Washington or Saddam’s in Iraq – made the 2003 invasion and the suffering that followed all the more inevitable.

The same predilection for the simple-minded “madman” narrative has once again pushed us squarely into another international crisis. And once again, it has served as a way to avoid examining the real background to, and reasons for, what is happening in Ukraine and wider eastern Europe.

Putin’s actions – though potentially no less disastrous than the US-led invasion of Iraq, and certainly as illegal – are also rooted in his own “rational” assessment of Russian geopolitical interests.

But unlike Washington’s reasons for invading Iraq, Putin’s grounds for threatening and now invading Ukraine were not concealed. He has been quite open and consistent about the rationale for years, even if western leaders ignored his speeches, and western media rarely cited anything more than his most tub-thumping, jingoistic soundbites.

Russia has realistic objections to the behaviour and bad faith of the US and Nato over the past three decades. Nato, we should remind ourselves, is primarily a creature of the Cold War, a vehicle for the West to project an aggressive military posture towards the former Soviet Union under the cover of a “defence” organisation.

But following the USSR’s dissolution in 1991, the western military alliance was not disbanded. Quite the reverse. It grew to absorb almost all of the former east European states that had belonged to the Soviet bloc and it made a new bogeyman of Russia. Western military budgets climbed year by year.

Russia expects a so-called “sphere of influence“, in the same way that the US demands one. What’s been going on instead for the best part of 30 years is that the US, as the world’s sole superpower, has expanded its own sphere of influence right up to Russia’s doorstep. Like Washington, Putin has the nuclear arsenal to back up his demands. To ignore either his claim for a sphere of influence or Russia’s ability to impose it by force if necessary is either hypocrisy or foolishness.

That too paved the path to the current invasion.

But Putin has other reasons – from his perspective – to act. He also wants to show the US that there is a price to be paid for Washington’s repeated broken promises on security arrangements in Europe. Russia dissolved its own military alliance, the Warsaw Pact, after the fall of the Soviet Union in a sign both of its weakness and its willingness to reorder its relations with its neighbours.

The US and the European Union had a chance to welcome Russia into the fold, and make it a partner in Europe’s security. Instead the Cold War mentality persisted even more in western capitals than in Moscow. The West’s military bureaucracies that need war, or at least the threat of it to justify their jobs and budgets, lobbied to keep Russia at arm’s length.

Meanwhile, eastern Europe became a large, and profitable, new market for western arms makers. That paved the path to this crisis too.

And finally, Putin has every incentive to deal more decisively with the eight-year festering wound of a civil war between anti-Russian, Ukrainian nationalists and ethnic Russian fighters from the Donbas region, in Ukraine’s east. Even before the current invasion, many thousands had died.

Ukrainian nationalists want entry into Nato so it is sucked into the Donbas bloodbath on their side – fuelling a war that could spiral out of control into a direct confrontation between Nato and Russia. Putin wants to show Nato and militant Ukrainians that will be no simple matter.

The invasion is intended as a shot across the bows to dissuade Nato from moving its high-wire act into Ukraine.

Western leaders were warned of all this by their own officials way back in 2008, as a leaked US diplomatic cable reveals: “Strategic policy considerations also underlie strong opposition to Nato membership for Ukraine and Georgia. In Ukraine, these include fears that the issue could potentially split the country in two, leading to violence or even, some claim, civil war, which would force Russia to decide whether to intervene.”

But even now, the West is undeterred. It is losing no time in pouring yet more weapons into Ukraine, further fuelling the fire.

None of this, of course, means Putin’s actions are virtuous, or even wise. But his invasion of Ukraine looks no more irrational or dangerous than Nato’s decades of provocative moves against a nuclear-armed Russia.

And here we get to the nub of the matter. The West alone defines what “rational” means – and on that basis, its enemies can always be dismissed as deranged and evil.

Western media propaganda only serves to deepen these trends in humanising, or otherwise, those caught up in events.

As the Arab and Middle Eastern Journalists Association observed at the weekend, much of the coverage has been blatantly racist, with western commentators noting with sympathy that those fleeing Russia’s invasion of Ukraine, unlike apparently those displaced by western invasions of the Middle East, are “like us”, “civilised” and don’t “look like refugees”.

Similarly, there is a stark contrast between the celebratory reporting of a Ukrainian “resistance” making improvised bombs against the advancing Russian army and the media’s routine demonisation of Palestinians as “terrorists” for resisting Israel’s decades of occupation.

Equally, US global dominance means it dictates the military, political and diplomatic framework of international relations. Other countries, including potential rivals like Russia and China, have to operate within that framework.

That forces them to react more often than act. Which is why it is so critically important that the western media report on the events fully and honestly, not resort to easy tropes designed to turn foreign leaders into caricatures and their populations into heroes or villians.

If Putin is a madman, like Iraq’s Saddam, Libya’s Muammar Gaddafi, Syria’s Bashar al-Assad and Afghanistan’s Taliban leaders before him, then the only solution is the use of force to the bitter end.

In global power politics that potentially translates into a third European “World War”, the overthrow of Russia’s government, and Putin’s trial at The Hague or his execution. The “strait-jacket” strategy. Which is precisely the catastrophic destination towards which western leaders, aided by the media, have been pushing the region over the past three decades.

There are far less dangerous ways of resolving international crises than that – but not so long as we keep peddling the myth of the “madman” enemy.