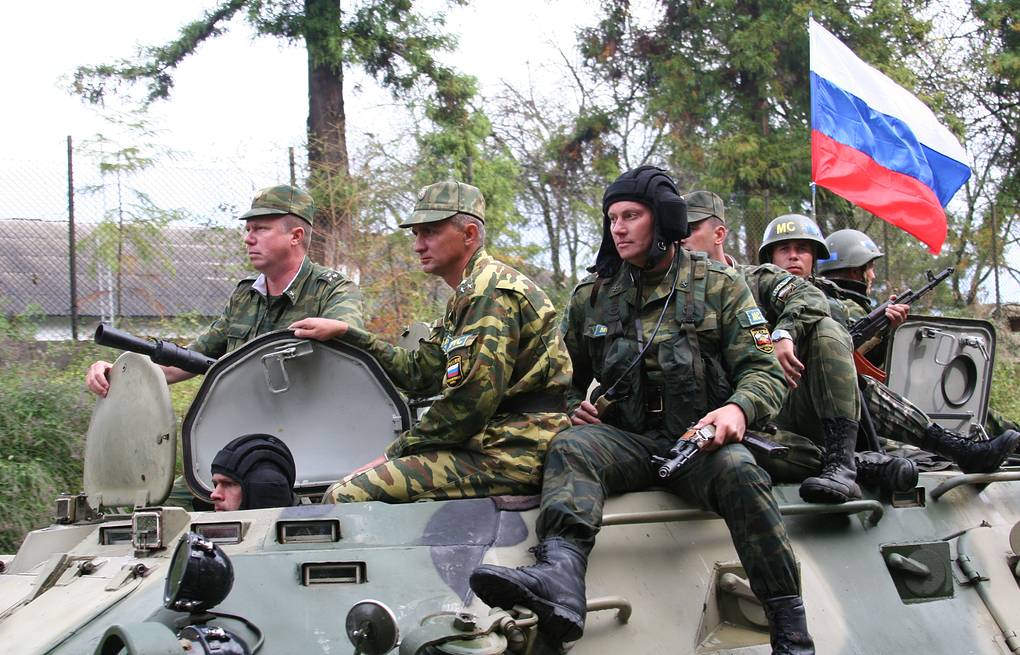 Former US Ambassador to Russia William J. Burns, who is now CIA director, admitted in a classified 2008 embassy cable that NATO expansion to Ukraine crosses Moscow’s security “redlines” and “could potentially split the country in two, leading to violence or even, some claim, civil war, which would force Russia to decide whether to intervene.”

Senior US government officials knew as far back as 2008 that the possibility of adding Ukraine to NATO was seen as a serious “military threat” by Russia, one that crosses Moscow’s security “redlines” and could force it to intervene.

Yet Western leaders continued insisting that Ukraine would join the US-led military alliance, right up until Russia did indeed intervene in February 2022.

At the annual NATO summit back in 2008, the George W. Bush administration publicly called for adding Russia’s neighbors Ukraine and Georgia to the military alliance. NATO’s secretary-general declared that the two countries would eventually become members.

But privately, US diplomats knew that this move would be seen as an existential threat by Moscow, and could provoke Russian military intervention in Ukraine.

The former US ambassador to Russia, William J. Burns, who is now director of the CIA, warned in a February 2008 embassy cable that Ukraine constituted a security “redline” for Moscow.

Burns cautioned that the issue of NATO membership for Ukraine “could potentially split the country in two, leading to violence or even, some claim, civil war, which would force Russia to decide whether to intervene.”

Burns wrote that Foreign Minister Sergey “Lavrov emphasized that Russia was convinced that [NATO] enlargement was not based on security reasons, but was a legacy of the Cold War.”

The former US ambassador to Russia, and current CIA director, published a prescient analysis that would foreshadow Moscow’s actions in 2022:

Ukraine and Georgia’s NATO aspirations not only touch a raw nerve in Russia, they engender serious concerns about the consequences for stability in the region. Not only does Russia perceive encirclement, and efforts to undermine Russia’s influence in the region, but it also fears unpredictable and uncontrolled consequences which would seriously affect Russian security interests. Experts tell us that Russia is particularly worried that the strong divisions in Ukraine over NATO membership, with much of the ethnic-Russian community against membership, could lead to a major split, involving violence or at worst, civil war. In that eventuality, Russia would have to decide whether to intervene; a decision Russia does not want to have to face.

This kind of internal violence did indeed break out in Ukraine, after a US-sponsored coup d’etat in 2014 overthrew a democratically elected government that had maintained a relatively neutral foreign policy, balanced between Russia and the West, and instead installed a staunchly pro-Western and anti-Russian regime.

In response to the 2014 putsch, Russian-speaking Ukrainians in the eastern Donbas region rose up against the coup government in Kiev, which they denounced as an illegitimate Western puppet regime.

Independence activists declared the creation of two new autonomous states, the Donetsk and Lugansk People’s Republics. The Ukrainian government, with Western military support and weapons, has waged a brutal war against these breakaway republics in the Donbas ever since.

Thousands of Ukrainians have been killed, and hundreds of thousands more have been displaced. Ukraine, which shares a massive 2,300-kilometer border with Russia, has been rocked by violence and instability since the 2014 US-backed coup – and this constant turmoil has had significant effects inside Russia, especially economically.

This was precisely the civil war scenario that Burns had warned about in 2008.

On February 21, 2022, Russia officially recognized Donetsk and Lugansk as independent states. Then on February 24, Moscow launched an invasion of Ukraine, which it said aimed to “demilitarize” and “denazify” the country.

Russia’s goal is to force Ukraine to maintain political neutrality, preventing it from being a Western military outpost that could threaten Russia on its borders, potentially with nuclear weapons.

While Western governments and media outlets portrayed the Russian invasion as the crazy decision of a supposed madman, internal US embassy cables showed that Washington knew as far back as 2008 that its push to expand NATO to Ukraine would result in this exactly this outcome: forcing Russia to intervene.

The world only knows this thanks to the whistleblowing journalist outlet Wikileaks, which published the formerly classified State Department cable by William Burns, and publicized his prophetic warning on Twitter.

Russia requests security guarantees respecting its ‘red lines’; US and NATO reject them

At every stage leading up the Russian military intervention in Ukraine in February 2022, the United States and its NATO alliance refused to give substantial concessions to Moscow, sabotaging all serious attempts at a diplomatic solution to the crisis.

Since it signed the Minsk II agreement in 2015, under the supervision of Germany and France, the Ukrainian government has been legally obligated to cease hostilities against the Donbas and create a decentralized system that ensures autonomy for Donetsk and Lugansk.

But Ukraine adamantly refused to abide by Minsk II, and its Western sponsors did nothing to save the diplomatic agreement.

So in December 2021, the Russian Federation sent the US and NATO a series of requests for security guarantees. Principal among these was the demand that the military alliance must not admit Ukraine and Georgia.

Moscow said that NATO membership for Ukraine and Georgia constituted a security “red line” – recalling the language Ambassador William Burns had used in his 2008 embassy cable.

For Russia as a country, regardless of who is president and regardless of the political ideology of the Kremlin, the prospect of Ukraine and Georgia joining NATO poses an existential security threat, given that both nations, which were former republics of the Soviet Union, directly border Russia at geostrategic points.

When Nazi Germany invaded the USSR in its 1941 Operation Barbarossa, it tore through and occupied Soviet Ukraine, to try to cut off Moscow’s access to the Black Sea and Caucasus, break off southern cities like Stalingrad, and ultimately surround the Russian heartland.

In its December 2021 request, the Russian Federation insisted that the United States and NATO must respond to its demand for security guarantees with legally binding written statements.

Moscow emphasized that any agreements had to be in writing precisely because NATO has a history of lying to it.

In 1990, the US, Britain, and France repeatedly promised the Soviet Union that they would not expand NATO “one inch eastward” after the reunification of Germany.

This is an undeniable historical fact, a matter of public record confirmed by numerous internal documents from Western governments.

But NATO later broke that promise, and not once or twice but 14 times. All 14 new member states that it admitted were east of Germany, and many had previously been Soviet allies in Moscow’s former security alliance, the Warsaw Pact.

A map of NATO expansion

NATO has militarily encircled Russia more and more by the year.

In fact Western militaries, including those of the United Kingdom and France, were using Estonia to run NATO military exercises just 100 kilometers from Russia’s border in late 2021 and early 2022, at the peak of the crisis in Ukraine.

The United States and NATO ultimately ignored Russia’s December 2021 request for security guarantees. Leaked copies of their written responses, which they had asked to keep private, show that they refused to grant Moscow any significant concessions, and both insisted that Ukraine could and even should one day join NATO. (NATO’s response was particularly aggressive and disrespectful.)

In a speech at the Munich Security Conference on February 19, 2022, the Western military alliance’s hawkish secretary-general, Jens Stoltenberg, threatened that “if Kremlin’s aim is to have less NATO on Russia’s borders, it will only get more NATO.”

Instead of respecting Russia’s security red lines, the United States and several European countries escalated the situation further by sending billions of dollars worth of more weapons to Ukraine.

Pointing to a Russian troop deployment inside its own territory, near its border with Ukraine, Western governments deployed more soldiers to the region as well, driving up the tensions.

Throughout the entire time, NATO depicted itself as an angelic, innocent “defensive” alliance. But Russia understands how high the stakes are, clearly seeing the consequences of NATO’s destructive wars on Yugoslavia – which destroyed and balkanized the country – Afghanistan, and Libya – which turned what had been the most prosperous country in Africa into a failed state with open-air slave markets.

US calls for Ukraine and Georgia to join NATO, organizes 2014 coup to remove independent government

The 2022 crisis in Ukraine traces its roots back to the NATO summit in Bucharest, Romania in 2008, when the George W. Bush administration publicly called for adding Ukraine and Georgia to the US-led military alliance.

There were internal divisions within NATO, and some members, namely Germany and France, were uncomfortable with the possibility. But NATO Secretary-General Jaap de Hoop Scheffer declared that Ukraine and Georgia eventually “will become member nations.”

Ukraine’s president at the time was Viktor Yushchenko, a US-backed, pro-Western politician who supported NATO membership.

But in the 2010 presidential election, the Ukrainian people voted for a new leader who promised a more balanced foreign policy, Viktor Yanukovych.

For Washington and Brussels, however, Yanukovych was too independent. So in 2014, the United States sponsored a coup d’etat to overthrow the democratically elected president.

Far-right extremists and neo-Nazis played a key role as the violent muscle behind this putsch.

Meanwhile, behind the scenes, senior US diplomats like hardline anti-Russian hawk Victoria Nuland were conspiring with friendly Ukrainian politicians to create a pro-Western puppet regime right on Russia’s borders.

A leaked 2014 phone recording shows that Nuland and other US officials had handpicked the top officials who would run Ukraine’s government after the Washington-backed coup.

The Joe Biden administration brought Nuland back in 2021, appointing her third-in-command of the State Department, where she helped to shape US policy toward Russia, pushing for an extremely aggressive strategy.

Nuland is a key figure in Washington’s neoconservative foreign-policy circles. Before she helped run the Obama and Biden State Departments, Nuland was Vice President Dick Cheney’s principal deputy foreign policy adviser from 2003 to 2005, during the Iraq War.

Nuland’s mentor Cheney has himself made it clear that the United States will never tolerate a strong and independent government in Moscow. Cheney sought to break up Russia itself after the overthrow of the Soviet Union.

Back in 1992, the Pentagon drafted a new belligerent US defense strategy, overseen by a neoconservative ally of Nuland and Cheney, Paul Wolfowitz. It clearly stated that Washington’s “first objective is to prevent the re-emergence of a new rival… deterring potential competitors from even aspiring to a larger regional or global role.”

The zero-sum game mentality behind this Wolfowitz Doctrine, which insists that the US empire must run the world without any opposition, and which refuses to countenance the possibility of Russia having its own security interests, still undergirds Washington’s foreign policy to this day.

The US “maximum-pressure” strategy against Moscow that this imperial doctrine has inspired, under the watch of anti-Russia hawks like Nuland, helped provoke exactly what Ambassador William Burns warned about in 2008: a Russian military intervention in Ukraine.

What Does the U.S. Public Think of Its Government Arming and Bombing the World?

The Bilderbergers in Switzerland