Russia-Ukraine War: George Bush’s Admission of His Crimes in Iraq Was No ‘Gaffe’ 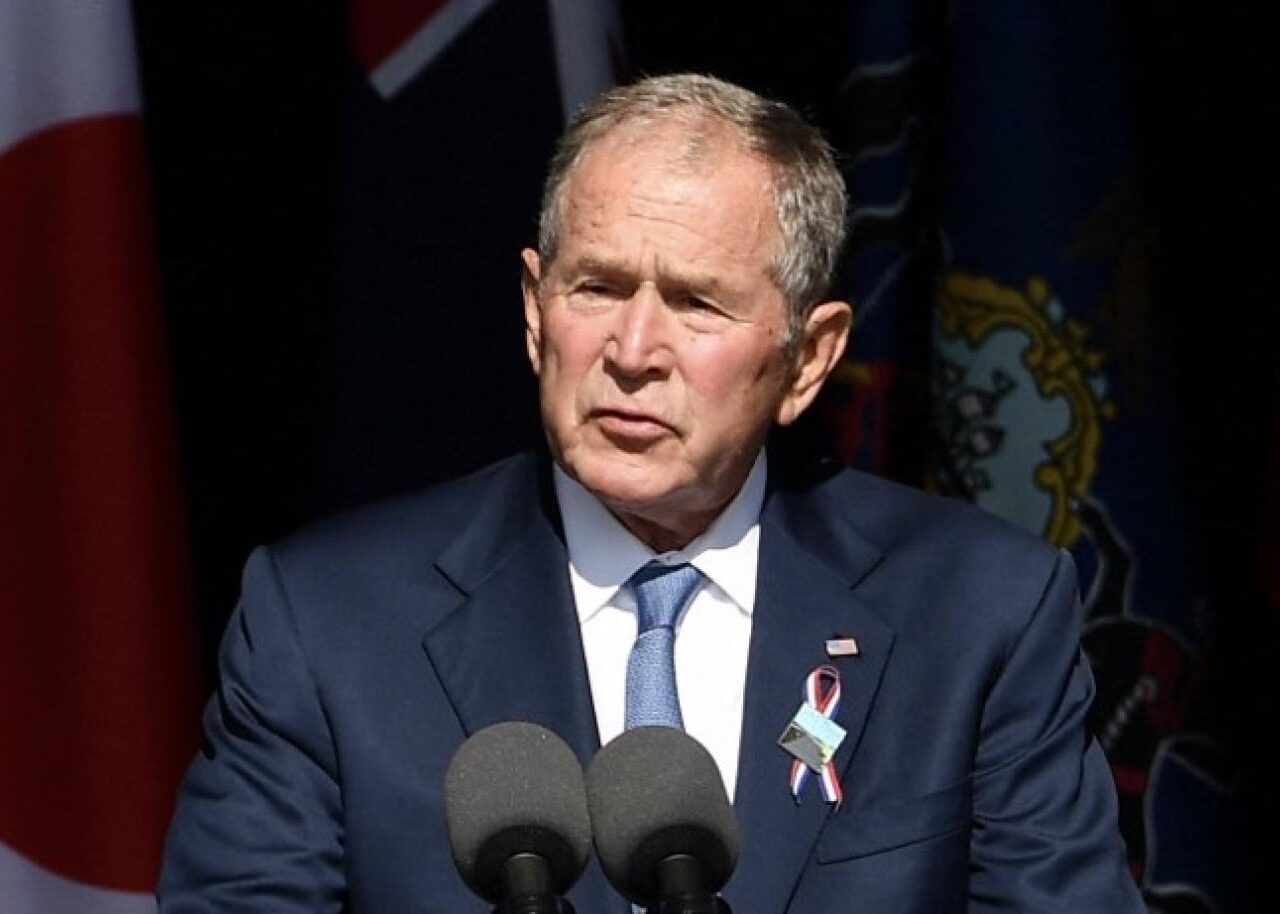 The former president’s confusion over the invasions of Iraq and Ukraine should lead to western soul-searching, not mirth.

Bush observed that a lack of checks and balances in Russia had allowed “one man to launch a wholly unjustified and brutal invasion of Iraq… I mean, Ukraine. Iraq too. Anyway… I’m 75.”

It sounded like another “Bushism” – a verbal slip-up – for which the 43rd president was famous. Just like the time he boasted that people “misunderestimated” him, or when he warned that America’s enemies “never stop thinking about new ways to harm our country and our people – and neither do we”.

Maybe that explains why his audience laughed. Or maybe not, given how uncomfortable the laughter sounded.

Bush certainly wanted his mistake to be seen as yet another slip-up, which is why he hurriedly blamed it on his age. The senility defence doubtless sounds a lot more plausible at a time when the incumbent president, Joe Biden, regularly loses track of what he is saying and even where he is.

The western media, in so far as it has bothered to report Bush’s speech, has laughed along nervously too. It has milked the incident largely for comic effect: “Look, we can laugh at ourselves – unlike that narcissist Russian monster, Putin.”

The BBC accorded Bush’s comment status as a down-page brief news item. Those that gave it more attention preferred to term it a “gaffe” or an amusing “Freudian slip”.

But the focus on the humour of the moment is actually part of the media’s continuing war on our understanding of recent history. It is intended to deflect us, the audience, from thinking about the real significance of Bush’s “gaffe”.

The only reason the media is now so belatedly connecting – if very indirectly – “a wholly unjustified and brutal invasion” of Ukraine and what happened in Iraq is because of Bush’s mistake.

Had it not happened, the establishment media would have continued to ignore any such comparison. And those trying to raise it would continue to be dismissed as conspiracy theorists or as apologists for Putin.

The implication of what Bush said – even for those mockingly characterising it in Freudian terms – is that he and his co-conspirator, British Prime Minister Tony Blair, are war criminals and that they should be on trial at the Hague for invading and occupying Iraq.

Everything the current US administration is saying against Putin, and every punishment meted out on Russia and ordinary Russians, can be turned around and directed at the United States and Britain.

Should the US not be under severe economic sanctions from the “civilised world” for what it did to Iraq? Should its sportspeople not be banned from international events? Should its billionaires not be hunted down and stripped of their assets? And should the works of its long-dead writers, artists and composers not be shunned by polite society?

And yet, the western establishment media are proposing none of the above. They are not calling for Blair and Bush to be tried for war crimes. Meanwhile, they echo western leaders in labelling what Russia is doing in Ukraine as genocideand labelling Putin as an evil madman.

The western media are as uncomfortable taking Bush’s speech at face value as his audience was. And for good reason.

That is because the media are equally implicated in US and UK crimes in Iraq. They never seriously questioned the ludicrous “weapons of mass destruction” justification for the invasion. They never debated whether the “Shock and Awe” bombing campaign of Baghdad was genocidal.

And, of course, they never described either Bush or Blair as madmen and megalomaniacs and never accused them of waging a war of imperialism – or one for oil – in invading Iraq. In fact, both continue to be treated by the media as respected elder statesmen.

During Trump’s presidency, leading journalists waxed nostalgic for the days of Bush, apparently unconcerned that he had used his own presidency to launch a war of aggression – the “supreme international crime”.

And Blair continues to be sought out by the British and US media for his opinions on domestic and world affairs. He is even listened to deferentially when he opines on Ukraine.

But this is not simply about a failure to acknowledge the recent historical record. Bush’s invasion of Iraq is deeply tied to Putin’s invasion of Ukraine. And for that reason, if no other, the western media ought to have been driving home from the outset the parallels between the two – as Bush has now done in error.

That would have provided the geopolitical context for understanding – without necessarily justifying – Russia’s invasion of Ukraine and the West’s role in provoking it. Which is precisely why the media have worked so hard to ignore those parallels.

In invading Iraq, Bush and Blair created a precedent that powerful states could redefine their attack on another state as “pre-emptive” – as defensive rather than aggressive – and thereby justify the military invasion in violation of the laws of war.

Bush and Blair falsely claimed both that Iraq threatened the West with weapons of mass destruction and that its secular leader, Saddam Hussein, had cultivated ties with the extreme Islamists of al-Qaeda that carried out the 9/11 attacks on the US. These pretexts ranged from the entirely unsubstantiated to the downright preposterous.

Putin has argued – more plausibly – that Russia had to take pre-emptive action against covert efforts by a US-led Nato to expand its military sphere of influence right up to Russia’s borders. Russia feared that, left unchecked, the US and Nato were preparing to absorb Ukraine by stealth.

But how does that qualify Russia’s invasion as defensive? The Kremlin’s fears were chiefly twofold.

First, it could have paved the way for Nato stationing missiles minutes away from Moscow, eroding any principle of mutual deterrence.

And second, Nato’s incorporation of Ukraine would have drawn the western military alliance directly into Ukraine’s civil war in the eastern Donbas region. That is where Ukrainian forces, including neo-Nazi elements like the Azov Brigade, have been pitted in a bloody fight against ethnic Russian communities.

In this view, absent a Russian invasion, Nato could have become an active participant in propping up Ukrainian ultra-nationalists killing ethnic Russians – as the West is now effectively doing through its arming of Ukraine to the tune of more than $40bn.

Even if one discounts Russia’s concerns, Moscow clearly has a greater strategic interest invested in what its neighbour Ukraine is doing on their shared border than Washington ever had in Iraq, many thousands of miles away.

Even more relevant, given the West’s failure to acknowledge, let alone address, Bush and Blair’s crimes committed in Iraq, is Russia’s suspicion that US foreign policy is unchanged two decades on. On what basis would Moscow believe that Washington is any less aggressive or power-hungry than it was when it launched its invasion of Iraq?

The western media continue to refer to the US attack on Iraq, and the subsequent bloody years of occupation, as variously a “mistake”, a “misadventure” and a “blunder”. But surely it does not look that way to Moscow, all the more so given that Washington followed its invasion of Iraq with a series of proxy wars against other Middle Eastern and North African states such as Libya, Syria and Yemen.

To Russia, the attack on Iraq looks more like a stepping stone in a continuum of wars the US has waged over decades for “full-spectrum dominance” and to eradicate competitors for control of the planet’s resources.

With that as the context, Moscow might have reasonably imagined that the US and its Nato allies were eager for yet another proxy war, this time using Ukraine as the battlefield. Recent comments from Biden administration officials, such as Defence Secretary Lloyd Austin, noting that Washington’s tens of billions of dollars in military aid to Kyiv is intended to “weaken Russia”, can only accentuate such fears.

Back in March, Leon Panetta, a former US secretary of defence and the CIA director under Barack Obama, who is in a position to speak more freely than serving officials, observed that Washington was waging “a proxy war with Russia, whether we say so or not”.

He predicted where US policy would head next, noting that the aim would be “to provide as much military aid as necessary”. Diplomacy has been a glaringly low priority for Washington.

Barely concealed from public view is a desire in the US and its allies for another regime change operation – this time in Russia – rather than end the war and the suffering of Ukrainians.

Last week, the New York Times very belatedly turned down the war rhetoric a notch and called on the Biden administration to advance negotiations. Even so, its assessment of where the blame lay for Ukraine’s destruction was unambiguous: “Mr Putin will go down in history as a butcher.”

But have Bush or Blair gone down in history as butchers? They most certainly haven’t. And the reason is that the western media have been complicit in rehabilitating their images, presenting them as statesmen who “blundered” – with the implication that good people blunder when they fail to take account of how entrenched the evil of everyone else in the world is.

A butcher versus a pair of blunderers.

This false distinction means western leaders and western publics continue to evade responsibility for western crimes in Iraq and elsewhere.

That was why in late February – in reference to Ukraine – a TV journalist could suggest to Condoleezza Rice, who was one of the architects of the illegal war of aggression on Iraq as Bush’s national security adviser: “When you invade a sovereign nation, that is a war crime.” The journalist apparently did not consider for a moment that it was not just Putin who was a war criminal but the very woman she was sitting opposite.

It was also why Rice could nod solemnly and agree with a straight face that Putin’s invasion of Ukraine was “against every principle of international law and international order – and that’s why throwing the book at them [Russia] now in terms of economic sanctions and punishments is a part of it”.

But a West that has refused to come to terms with its role in committing the “supreme international crime” of invading Iraq, and has been supporting systematic crimes against the sovereignty of other states such as Yemen, Libya and Syria, cannot sit in judgment on Russia. And furthe→r, it should not be trying to take the high ground by meddling in the war in Ukraine.

If we took the implications of Bush’s comment seriously, rather than treating it as a “gaffe” and viewing the Iraq invasion as a “blunder”, we might be in a position to speak with moral authority instead of flaunting – once again – our hypocrisy.

NOTE FROM THE AUTHOR:  My posts are reader-supported and freely accessible. If you liked this post or any of the others, please consider sharing it with friends. You can make a donation to support my work by becoming a paid Substack subscriber, via Paypal or my bank account, or alternatively setting up a monthly direct debit mandate with GoCardless. A complete archive of my writings is available on my website. I’m on Twitter and Facebook.