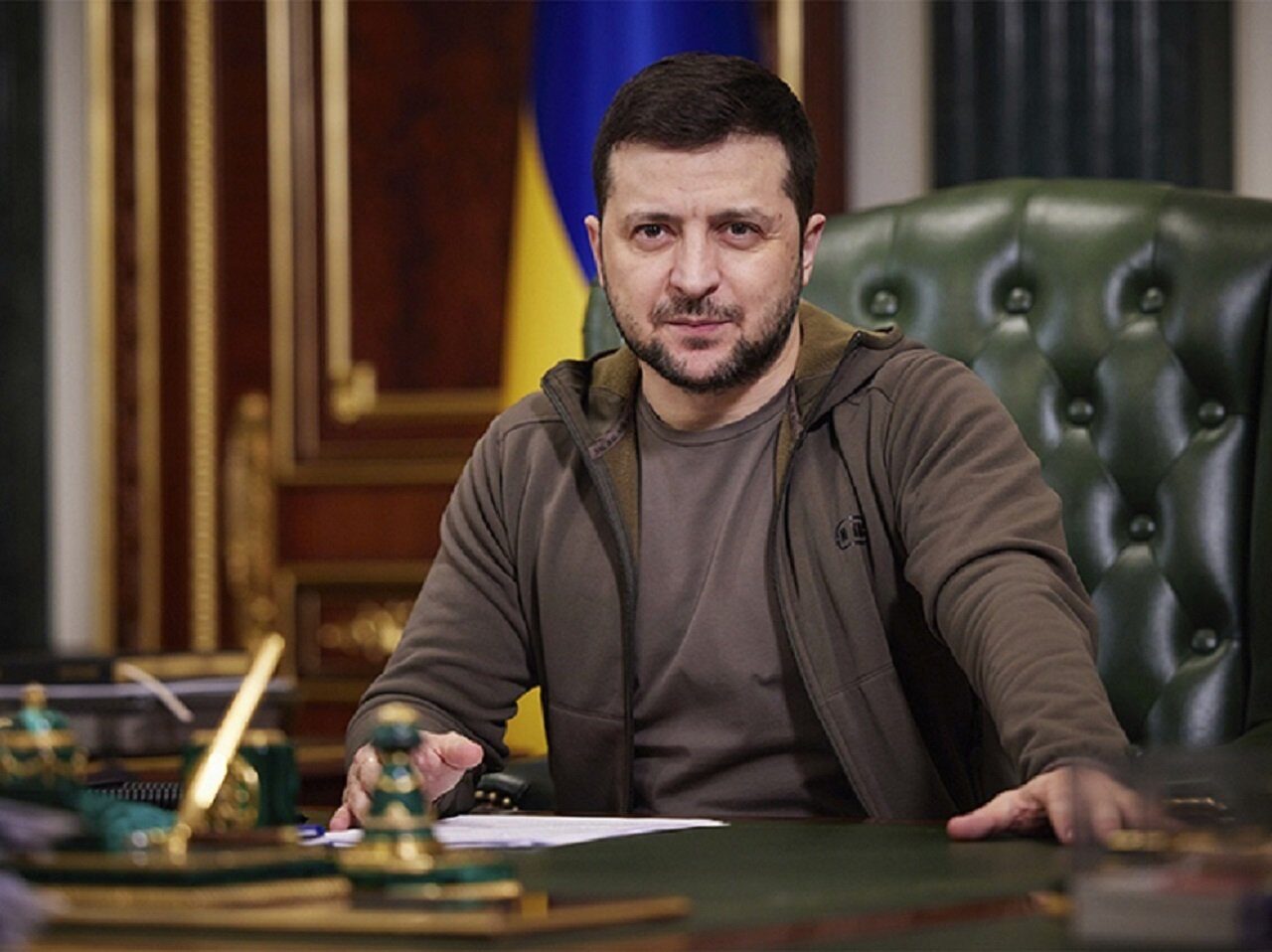 As we hydroplane toward the brink of nuclear armageddon while Bono and the Edge play U2 songs in Kyiv, it’s probably worth taking a moment to highlight the fact that this entire war could have been avoided if the US had simply pledged military protection for Zelensky against the far right extremists who were threatening to lynch him if he enacted the peacemaking policies he was elected to enact.

To be clear, what we are indulging in here is entirely an act of fantasy. In imagining what would have happened if the US had pledged to protect the Ukrainian government from an undemocratic violent overthrow at the hands of fascists instead of waging a horrific proxy war, we are imagining a world in which the US government acts in the highest interest of all instead of working continuously to dominate the planet no matter how much madness and cruelty it needs to inflict upon humanity. A world in which the US hadn’t been taking steps toward the orchestration of this proxy war for many years.

With that out of the way, it’s just a simple fact that for a fraction of the military firepower the US is pouring into Ukraine right now, it could have prevented the entire war by simply protecting Ukrainian democracy from the undemocratic impulses of the worst people in that country.

When he was asked by The Nation’s Katrina vanden Heuvel last month what he thinks is preventing Kyiv from signing a peace agreement with Russia, John Mearsheimer, whose analysis of this conflict has been prophetic for many years, replied as follows:

I think that when Zelensky ran for president he made it very clear that he wanted to work out an arrangement with Russia that ended the crisis in Ukraine, and he won. And what he then tried to do was move toward implementing the Minsk II agreement. If you were going to shut down the conflict in Ukraine, you had to implement Minsk II. And Minsk II meant giving the Russian-speaking and the ethnic Russian population in the easternmost part of Ukraine, the Donbass region, a significant amount of autonomy, and you had to make the Russian language an official language of Ukraine.

I think Zelensky found out very quickly that because of the Ukrainian right, it was impossible to implement Minsk II. Therefore even though the French and the Germans, and of course the Russians were very interested in making Minsk II work, because they wanted to shut down the crisis, they couldn’t do it. In other words, the Ukrainian right was able to stymie Zelensky on that front.

When Mearsheimer says that the Ukrainian right was able to stymie Zelensky, he doesn’t mean by votes or by democratic processes, he means by threats and violence. In an article last month titled “Siding with Ukraine’s far-right, US sabotaged Zelensky’s mandate for peace,” journalist Aaron Maté wrote the following:

In April 2019, Zelensky was elected with an overwhelming 73% of the vote on a promise to turn the tide. In his inaugural address the next month, Zelensky declared that he was “not afraid to lose my own popularity, my ratings,” and was “prepared to give up my own position – as long as peace arrives.”

But Ukraine’s powerful far-right and neo-Nazi militias made clear to Zelensky that reaching peace in the Donbas would have a much higher cost.

“No, he would lose his life,” Right Sector co-founder Dmytro Anatoliyovych Yarosh, then the commander of the Ukrainian Volunteer Army, responded one week after Zelensky’s inaugural speech. “He will hang on some tree on Khreshchatyk – if he betrays Ukraine and those people who died in the Revolution and the War.”

In a 2019 interview with Maté, the late great scholar Stephen Cohen made the following comments:

But ultimately you have a situation now which seems not to be widely understood, that the new president of Ukraine, Zelensky, ran as a peace candidate. This is a bit of a stretch and maybe it doesn’t mean a whole lot to your generation, but he ran a kind of George McGovern campaign. The difference was McGovern got wiped out and Zelensky won by, I think, 71, 72 percent. He won an enormous mandate to make peace. So, that means he has to negotiate with Vladimir Putin. And there are various formats, right? There’s a so-called Minsk format which involves the German and the French; there’s a bilateral directly with Putin. But his willingness—and this is what’s important and not well reported here—his willingness to deal directly with Putin, which his predecessor, Poroshenko, was not or couldn’t or whatever reason—actually required considerable boldness on Zelensky[‘s part], because there are opponents of this in Ukraine and they are armed. Some people say they’re fascists but they’re certainly ultra-nationalist, and they have said that they will remove and kill Zelensky if he continues along this line of negotiating with Putin.

Zelensky cannot go forward as I’ve explained. I mean, his life is being threatened literally by a quasi-fascist movement in Ukraine, he can’t go forward with full peace negotiations with Russia, with Putin, unless America has his back. Maybe that won’t be enough, but unless the White House encourages this diplomacy, Zelensky has no chance of negotiating an end to the war, so the stakes are enormously high.

In an article titled “Why Russia Went to War Now,” Antiwar’s Ted Snyder explains that Putin likely made the decision to invade because Kyiv wasn’t respecting Minsk II and because future NATO membership with Ukraine was being kept on the table while weapons poured into the country from the US.

“Zelensky wouldn’t talk to the leaders of the Donbas, Minsk was dead and Russia feared an imminent operation against the ethnic Russian population of the Donbas,” Snyder writes. “At the same time, Washington had become a leaky faucet on promises of flooding Ukraine with weapons and open doors to NATO: two red lines Putin had clearly drawn.”

But, again, Zelensky couldn’t enact Minsk because it had been made abundantly clear to him that he faced a horrific death by fascist lynch mob if he did. If the choice is between taking a chance on a US proxy war and getting Gaddafied in the public square, I think many leaders around the world would opt for the former.

So Zelensky made peace with the Nazis, whose will for Ukraine aligned with Washington’s.

Despite his branding in MSM as a Jewish leader against including Nazis in Ukrainian's government & military, Pres. Zelensky caved when they challenged him, has honored them, offered seats at the table & relies on them as a frontline force against Russia https://t.co/tFNyPDSCNk

But what this means is that every major factor which led to Russia’s decision to invade could have been nullified by the US government. A guarantee of no NATO membership for Ukraine could have been made. The weapons supplies could have been stopped. And Zelensky and his government could have received protection from the US military against the armed fascists who would repeat their violent acts of 2014 upon them.

It would have been wins all around. We wouldn’t be staring down the barrel of nuclear armageddon. Ukraine would have been spared the horrors of an insane proxy war. Western powers wouldn’t be sending arms to literal Nazi factions. And the US would actually be protecting Ukrainian democracy, instead of just pretending to.

But, again, we are only indulging in fantasy here. Fighting Nazis, protecting democracy and waging peace are not things the US actually does in real life. The US is the most tyrannical and murderous regime on earth, by a truly massive margin, and it will happily risk the life of everyone on earth if it means securing planetary rule.

But sometimes it’s nice to imagine the kind of world we might be living in if we were not ruled by psychopaths.

Noam Chomsky and Robert Pollin: If We Want a Future, Green New Deal Is Key

Reinventing Progress: How to Move Beyond Technocracy