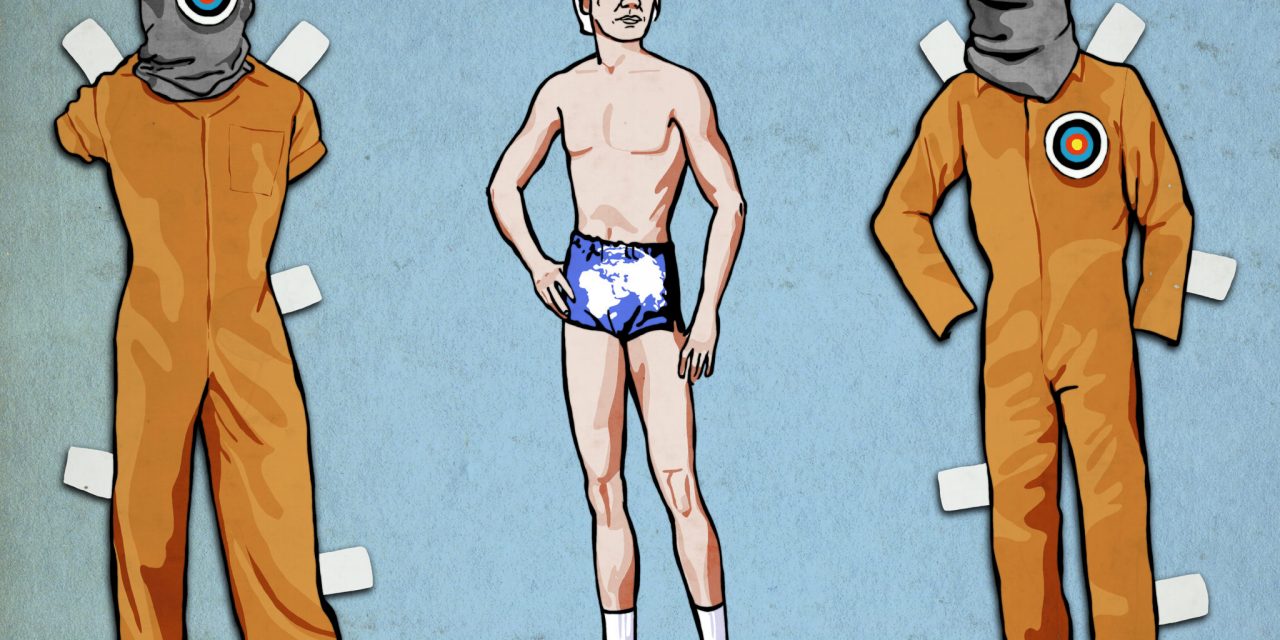 David Morales, the indicted owner of the Spanish private security firm Undercover Global, is being investigated by Spain’s high court for allegedly providing the CIA with audio and video recordings of the meetings WikiLeaks founder Julian Assange had with his attorneys and other visitors when the publisher was in the Ecuadorian Embassy in London. The security firm also reportedly photographed the passports of all of Assange’s visitors. It is accused of taking visitors’ phones, which were not permitted in the embassy, and opening them, presumably in an effort to intercept calls. It reportedly stole data from laptops, electronic tablets and USB sticks, all required to be left at the embassy reception area. It allegedly compiled detailed reports on all of Assange’s meetings and conversations with visitors. The firm even is said to have planned to steal the diaper of a baby — brought to visit Assange — to perform a DNA test to establish whether the infant was a secret son of Assange. UC Global, apparently at the behest of the CIA, also allegedly spied on Ecuadorian diplomats who worked in the London embassy.

The probe by the court, the Audiencia Nacional, into the activities of UC Global, along with leaked videos, statements, documents and reports published by the Spanish newspaper El País as well as the Italian newspaper La Repubblica, offers a window into the new global security state. Here the rule of law is irrelevant. Here privacy and attorney-client privilege do not exist. Here people live under 24-hour-a-day surveillance. Here all who attempt to expose the crimes of tyrannical power will be hunted down, kidnapped, imprisoned and broken. This global security state is a terrifying melding of the corporate and the public. And what it has done to Assange it will soon do to the rest of us.

The publication of classified documents is not yet a crime in the United States. If Assange is extradited and convicted, it will become one. Assange is not an American citizen. WikiLeaks, which he founded, is not a U.S.-based publication. The extradition of Assange would mean the end of journalistic investigations into the inner workings of power. It would cement into place a terrifying global, corporate tyranny under which borders, nationality and law mean nothing. Once such a legal precedent is set, any publication that publishes classified material, from The New York Times to an alternative website, will be prosecuted and silenced.

The flagrant defiance of law and international protocols in the persecution of Assange is legion. In April 2019, Ecuadorian President Lenín Moreno capriciously terminated Assange’s right of asylum at the London embassy, where he spent seven years, despite Assange’s status as a political refugee. Moreno authorized British police to enter the embassy — diplomatically sanctioned sovereign territory — to arrest a naturalized citizen of Ecuador. (Assange retains his Australian citizenship.) The British police seized Assange, who has never committed a crime, and the British government keeps him imprisoned, ostensibly for a bail violation.

Assange is being held in the notorious high-security HM Prison Belmarsh. He has spent much of his time in isolation, is often heavily sedated and has been denied medical treatment for a variety of physical ailments. His lawyers say they are routinely denied access to their client. Nils Melzer, the United Nations’ special rapporteur on torture who examined Assange with two physicians, said Assange has undergone prolonged psychological torture. Melzer has criticized what he calls the “judicial persecution” of Assange by Britain, the United States, Ecuador and Sweden, which prolonged an investigation into a sexual assault case in an effort to extradite Assange to Sweden. Assange said the case was a pretext to extradite him to the United States. Once Assange was arrested by British police the sexual assault case was dropped.

Melzer says Assange would face a politicized show trial in the United States if he were extradited to face 17 charges under the Espionage Act for his role in publishing classified military and diplomatic cables, documents and videos that exposed U.S. war crimes in Iraq and Afghanistan. Each of the counts carries a potential sentence of 10 years, and an additional charge that Assange conspired to hack into a government computer has a maximum sentence of five years. A hearing to determine whether he will be extradited to the United States starts Feb. 24 at London’s Woolwich Crown Court. It is scheduled to last about a week and then resume May 18, for three weeks more.

WikiLeaks released U.S. military war logs from Afghanistan and Iraq, a cache of 250,000 diplomatic cables and 800 Guantanamo Bay detainee assessment briefs along with the 2007 “Collateral Murder” video, in which U.S. helicopter pilots banter as they gun down civilians, including children and two Reuters journalists, in a Baghdad street. The material was given to WikiLeaks in 2010 by Chelsea Manning, then Bradley Manning, a low-ranking intelligence specialist in the U.S. Army. Assange has been accused by an enraged U.S. intelligence community of causing “one of the largest compromises of classified information in the history of the United States.” Manning was convicted of espionage charges in August 2013 and sentenced to 35 years in a military prison. She was granted clemency in January 2017 by President Barack Obama. Manning was ordered back to prison last year after refusing to testify before a grand jury in the WikiLeaks case, and she remains behind bars. No one was ever charged for the war crimes WikiLeaks documented.

Assange earned the enmity of the Democratic Party establishment by publishing 70,000 hacked emails belonging to the Democratic National Committee and senior Democratic officials. The emails were copied from the accounts of John Podesta, Hillary Clinton’s campaign chairman. The Podesta emails exposed the donation of millions of dollars to the Clinton Foundation by Saudi Arabia and Qatar, two of the major funders of Islamic State. It exposed the $657,000 that Goldman Sachs paid to Hillary Clinton to give talks, a sum so large it can only be considered a bribe. It exposed Clinton’s repeated mendacity. She was caught in the emails, for example, telling the financial elites that she wanted “open trade and open borders” and believed Wall Street executives were best positioned to manage the economy, a statement that contradicted her campaign statements. It exposed the Clinton campaign’s efforts to influence the Republican primaries to ensure that Donald Trump was the Republican nominee. It exposed Clinton’s advance knowledge of questions in a primary debate. It exposed Clinton as the principal architect of the war in Libya, a war she believed would burnish her credentials as a presidential candidate.

Journalists can argue that this information, like the war logs, should have remained hidden, but they can’t then call themselves journalists.

The Democratic and Republican leaders are united in their crusade to extradite and sentence Assange. The Democratic Party, which has attempted to blame Russia for its election loss to Trump, charges that the Podesta emails were obtained by Russian government hackers. However, James Comey, the former FBI director, has conceded that the emails were probably delivered to WikiLeaks by an intermediary, and Assange has said the emails were not provided by “state actors.”

WikiLeaks has done more than any other news organization to expose the abuses of power and crimes of the American empire. In addition to the war logs and the Podesta emails, it made public the hacking tools used by the CIA and the National Security Agency and their interference in foreign elections, including French elections. It disclosed the internal conspiracy against British Labour Party leader Jeremy Corbyn by Labour members of Parliament. It intervened to save Edward Snowden, who made public the wholesale surveillance of the American public by our intelligence agencies, from extradition to the United States by helping him flee from Hong Kong to Moscow. (The Snowden leaks also revealed that Assange was on a U.S. “manhunt target list.”)

The inquiry by the Spanish court is the result of a criminal complaint filed by Assange, who accuses Morales and UC Global of violating his privacy and client-attorney confidentiality rights. The WikiLeaks founder also says the firm is guilty of misappropriation, bribery and money laundering.

Morales, according to El País, “stated both verbally and in writing to a number of his employees that, despite having been hired by the government of then-Ecuadorian President Rafael Correa, he also worked ‘for the Americans,’ to whom he allegedly sent documents, videos and audios of the meetings that the Australian activist held in the embassy.”

“Despite the fact that the Spanish firm — which is headquartered in the southern city of Jerez de la Frontera — was hired by Senain, the Ecuadorian intelligence services, Morales called on his employees several times to keep his relationship with the US intelligence services a secret,” the paper reported.

“The owner of UC Global S. L. ordered a meeting between the head of the Ecuadorian secret service, Rommy Vallejo, and Assange to be spied on, at a time when they were planning the exit of Assange from the Ecuadorian embassy using a diplomatic passport in order to take him to another country,” according to El País. “This initiative was eventually rejected by Assange on the basis that he considered it to be ‘a defeat,’ that would fuel conspiracy theories, according to sources close to the company consulted by this newspaper. Morales called on his employees to keep his relationship with the US intelligence services a secret.”

The Vallejo-Assange meeting, which included Assange’s lawyers, took place Dec. 21, 2017. The security firm made audio and video recordings through microphones and cameras installed in the embassy. The CIA was immediately made aware of the plan, perhaps through an “external streaming access point” installed in the embassy, according to El País. The next day the United States issued an international arrest warrant for Assange.

Microphones were implanted in fire extinguishers and a women’s restroom where Assange’s lawyers would cloister themselves with their client in an effort to avoid being recorded. The windows in the embassy were given a treatment that provided better audio quality for the laser microphones that the CIA was using from exterior locations, the paper reported.

When Moreno was elected to the presidency in Ecuador, replacing Rafael Correa, who had granted Assange asylum in the embassy, an intense campaign was launched to force the publisher from the embassy. It included daily harassment, cutoff of internet access and the termination of nearly all visits.

UC Global, which provides personal security for casino magnate Sheldon Adelson and protection for his company Las Vegas Sands, apparently used Adelson, a friend of President Trump and one of the largest donors to the Republican Party, to lobby the Trump administration and then-CIA Director Mike Pompeo to make Assange a priority target.

La Repubblica, like El País, obtained important files, recordings and other information stemming from the UC Global surveillance at the embassy. They include photos of Assange in the embassy and recordings of conversations he had with doctors, journalists, politicians, celebrities and members of his legal team.

“The videos and audio recordings accessed by the Repubblica reveal the extreme violations of privacy that Julian Assange, the WikiLeaks journalists, lawyers, doctors and reporters were subjected to inside the embassy, and represent a shocking case study of the impossibility of protecting journalistic sources and materials in such a hostile environment,” the Italian newspaper wrote. “This espionage operation is particularly shocking if we consider that Assange was protected by asylum, and if we consider that the information gathered will be used by the United States to support his extradition and put him in prison for the crimes for which he is currently charged and for which he risks 175 years in prison: the publication of secret US government documents revealing war crimes and torture, from Afghanistan to Iraq to Guantanamo.”