‘The US Has No Real Moral Authority to Talk About Freedoms’

Janine Jackson interviewed Netfa Freeman about Cuba sanctions for the June 7, 2019, episode ofCounterSpin. This is a lightly edited transcript.

Janine Jackson:  The Trump administration announced a ban on people-to-people group travel to Cuba, a sanction merited, Treasury Secretary Steven Mnuchin explained, because of Cuba’s “destabilizing role in the Western Hemisphere, providing a communist foothold in the region, and propping up US adversaries in places like Venezuela and Nicaragua by fomenting instability, undermining the rule of law and suppressing democratic processes.” 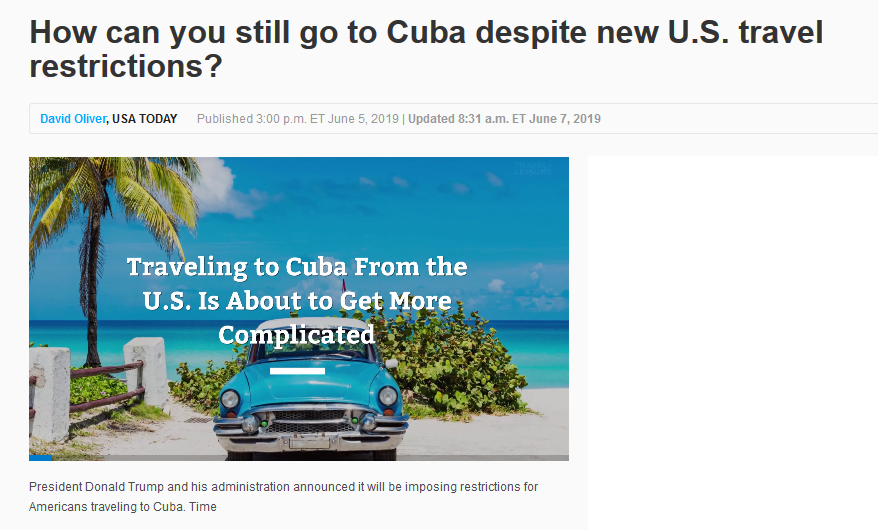 The theme of most media coverage so far has been disruption for travelers and to cruise line companies, with USA Today frankly tellingreaders “how you can still go to Cuba” despite the new rules.

It’s refreshing, in a way, to have media saying, “Ignore that guy in the corner. Here’s how you can still go to Cuba.” But US citizens have a right to deeper answers about why the state gets to tell them where they can go, and indeed use their freedom of movement as a political tool, all while employing imagery out of Red Scare 101.

Our next guest has recently returned from Cuba. He’s the Institute for Policy Studies’ Netfa Freeman, longtime director of the Institute’s Social Action & Leadership School for Activists. He joins us now by phone from Washington, DC. Welcome to CounterSpin, Netfa Freeman.

JJ: I guess let’s do a little background. This move, which is just part of a number of sanctions that the Trump White House has planned against Cuba, is being presented, like many things, as a departure from or an undoing of Obama policy.

But like many things, it’s not really a 180 degree turn away from that policy. What would be some relevant history, including going further back? Just what context should we be aware of as we consider this new travel ban?

NF: So I think the context that we should be aware of is the United States has waged a multifaceted and protracted war, for the purpose of regime change, against Cuba since 1960, since the dawn of the revolution. And it’s taken on many forms, and various intensities, depending on which party, which US administration, was in office. 1960 was when the United States first initiated a blockade against Cuba, trying to isolate it from the world, and then formalized that blockade in the form of the Helms/Burton Act in 1994, I believe that was the year, and then adding an additional act through the Torricelli bill in 1997.

These acts actually legislate things like the international economic embargo against non-US companies and US companies that are doing any type of trade with Cuba. It blocks Cuba from being part of any international financial institutions. It also allocates money, taxpayer dollars, through agencies like the US Agency for International Development, for what they call democracy programs, aiming television broadcasts and radio broadcast signals into the island, and also giving money, support on the ground, to Cuban citizens who want to participate in the subversion of their own country with the United States—through what they call “independent journalists” or “independent human rights organizations,” which are really not independent, because they’re funded by the United States.

The difference in the Obama approach and previous approaches is how that final agenda is carried out in terms of regime change. Like when they say Cuba is not democratic, and then all of them—even right now, the bipartisan Working Group on Cuba, led by people like Barbara Lee, just wrote a response to the administration, says that this [travel ban] undermines the efforts to “bring democracy” to Cuba. So that means there’s a bipartisan consensus that Cuba is not democratic. And then there’s the assumption that democracy is synonymous with capitalism.

And these are all assumptions. The Obama administration’s, I guess you would say, objective, regardless of the normalizing-of-relations policy, was to overwhelm Cuba with capitalist ventures and those kind of things, and also visits to the island with the intent to say that—and this is also in the bipartisan Working Group’s response—the US citizens are the best “ambassadors” to Cuba, the assumption being that Cuba will change if we just bring more visits, more programs that are US-based, and those kind of things. But the regime change objective remains the same.

The difference is the Trump administration, through John Bolton and Pompeo and all these different forces, is more shamelessly colonialist, more shamelessly implementing of the Monroe Doctrine. It doesn’t really care about the truth that is missing from their assertion that Cuba, Venezuela and Nicaragua constitute some “troika of tyranny,” when, in fact, it’s actually the US that constitutes, with the EU and NATO, an axis of domination that wants to crush all radical independent states that want to chart their own path, and want to exercise self-determination. 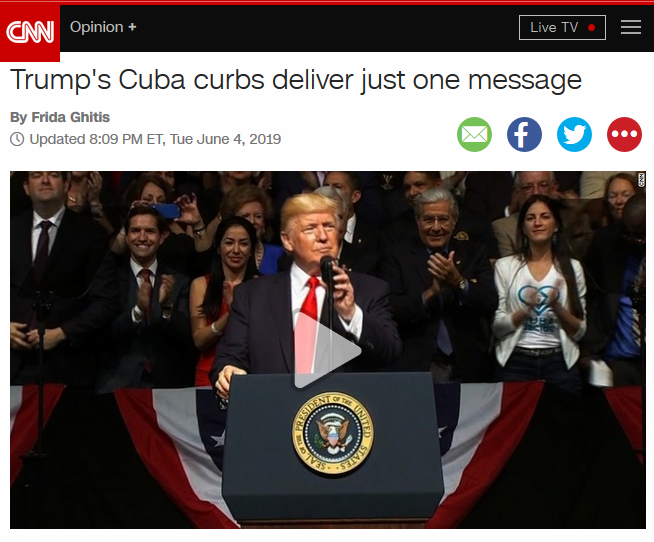 JJ: That narrow range of debate among politicians, I think, is reflected in the press as well. You see opposition to sanctions like this ban, but it seems to be, as a columnist had it on CNN, things like, “It is true that the Cuban government oppresses its people and deprives them of many freedoms, while helping to prop up the malevolent Venezuelan regime,” but sanctions are the wrong stick to use to make them better. Or we read, sanctions will push Cuba into the arms of Russia and China.

And you have to wonder, is this really the best we can do as a critique of the policies? And I would just say, they do take the US, and long have taken the US, out of step with the international community, haven’t they, with regard to Cuba?

NF: Oh, yes. And that’s one thing that media fail a lot on doing, in terms of, you mentioned the international community:  Every year, Cuba introduces a resolution to the United Nations condemning the embargo, and asking for it to be lifted or demanding that it be lifted. And every year, overwhelmingly, all of the countries of the world vote in favor of this resolution, the exceptions only being Israel and the US. Sometimes there’s a third country, that is usually under the domination of the United States, that will also go along with it; but it’s always only three. And right now, just last year, was 189 countries against the two countries that voted against this.

Not to mention that polls in the United States show a favorable…. US people, like by 75 percent, think that the relations between the two countries should be normalized, that the blockade—many of us call it a blockade, because of its pervasiveness—but that the embargo or the blockade should be lifted, regardless of whatever else they think about the country.  So yeah, this is completely out-of-step.

And then also what media really don’t do is make any kind of contrast/comparison between US policy toward Cuba, and their policy towards countries like Honduras or Haiti or Israel or Saudi Arabia, which obviously are repressive.

In fact, in Honduras, they’re about to recognize, 10 years after a US-orchestrated, -imposed government, where they helped depose the democratically elected president there, and now the country is facing serious repression, privatization of things, all sort of oppression. And the United States has nothing to say about those kind of things.

JJ: It’s very frustrating to hear even leftists say, “Of course, I have a principled objection to US-imposed coups or punitive actions by the US, but I’m not going to voice it now because, you know, that country has some real problems.” I’m guessing that Cubans know that they have problems, and things they want to deal with in their society, and to the extent that they are working on things to improve their society, aren’t there real ways that people in other countries could show solidarity?

Netfa Freeman: “A lot of media operate almost like they’re the fourth branch of the United States government, in terms of peddling misinformation, when you can’t tell the distinction between the misinformation and what is actually happening in countries.”

NF:  Yeah, there are real ways. I think one of the real ways is to look at some of the basic principles of sovereignty or human rights that have been laid down in the Universal Declaration of Human Rights. And the UN Charter, it talks about countries’ rights to self-determination. You know, it’s like the pot calling the kettle black for the United States, that has no real moral authority, to talk about freedoms, or to impose its concept of how another country should be. But countries deserve the right even to make their own mistakes.

A lot of media operate almost like they’re the fourth branch of the United States government, in terms of peddling misinformation, when you can’t tell the distinction between the misinformation and what is actually happening in countries.  So when people have reservations about how countries really are facing whatever problem it is, they have to acknowledge US policy that also includes misinformation about that country. And so they have to know how to distinguish between those things. And the media really have responsibility to do this. For example, the Trump administration keeps saying that Cuba has 20,000 security forces in Venezuela, and this is completely false. But we don’t really hear the US media talking about the fact that the administration is saying this, and then countering it with some facts.

JJ: One of the things most obviously missing from US media coverage of Cuba is Cubans, and the voice of actual Cubans. We virtually never hear from them. We hear from Cuban-Americans, but not Cubans themselves. And I just wonder, I know you’re not trying to speak for them, but what would be some of the information that, if we had that voice of Cuban citizens in our media dialogue, how would that change things?

NF:  Oh, it would change things tremendously. Cubans are very informed people, because of the universal education; they’re just very well read, they know about things around the world. And they can articulate why the blockade and why US policy has harmed their country, in terms of the monies and those kind of things, in terms of the cost to the Cuban economy. And they also make a distinction, which is very interesting, politically sophisticated, between the US people and the US government. So they talk about wanting friendship and exchanges with US people, people in the United States, and they make they sure, they always seem to understand, that the US policies by the government aren’t a reflection of US people.

Also, Cubans are not averse to talking about the problems they have with their own country. They can talk about what the issues are, and they don’t hesitate to do it. We hear propaganda that makes it seem like people are scared to speak, but no, they are very, very talkative people when it comes to sharing criticisms, even about Cuba itself. And we can see those things, and then know how to tell the difference between those things and the propaganda that we hear against the country. So they can articulate these things very well. And I think if we had some more voices in the media, it would just prove how illicit the policies are.

JJ: We’ve been speaking with Netfa Freeman of the Institute for Policy Studies. You can find their work on Cuba and a range of other issues on their website, IPS-dc.org. Netfa Freeman, thank you so much for joining us today on CounterSpin.