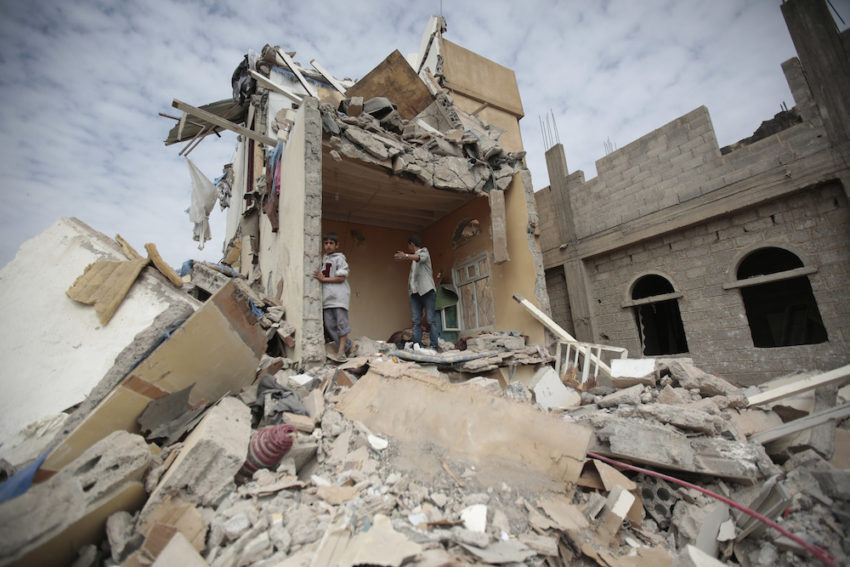 Boys stand on the rubble of houses destroyed by Saudi-led airstrikes in Sanaa, Yemen, where 14 civilians, including women and children, were killed. (AP Photo/Hani Mohammed)

A new report by a group of investigators commissioned by the U.N. Human Rights Council says the United States, Britain and France may be culpable for war crimes in Yemen. The three countries back a Saudi Arabia- and United Arab Emirates-led coalition fighting on the side of the government in the current Yemeni civil war, which has been ongoing for five years.

“Five years into the conflict, violations against Yemeni civilians continue unabated, with total disregard for the plight of the people and a lack of international action to hold parties to the conflict accountable,” Kamel Jendoubi, chair of the Group of Experts on Yemen, said in a press statement.

Investigators write that they “found reasonable grounds to believe that the parties to the conflict in Yemen are responsible for an array of human rights violations and violations of international humanitarian law.”

Though much of this information has been uncovered by journalists and such advocacy groups as Human Rights Watch, and in a 2018 United Nations report, the latest U.N. report “is striking for its broad demand for accountability,” reporter Sudarsan Raghavan explains in The Washington Post.

“The United States, in particular, provides logistical support and intelligence to the coalition, in addition to selling billions of dollars in weaponry to the group,” Raghavan writes.

The 2018 report determined that the Saudi and UAE coalition was responsible for killing thousands of civilians in airstrikes and shelling, and through the use of snipers and land mines; torturing detainees; and raping and intentionally starving citizens.

Anti-government Houthi rebels also are accused of war crimes, including using child soldiers. “None have clean hands,” Charles Garraway, one of the 2018 report’s investigators and a retired British military officer, told The New York Times in 2018.

Because the U.S., France and Britain supported and armed the Saudis, the U.N. investigators consider those countries complicit.

After the release of the 2018 report, then-Defense Secretary James Mattistold reporters that the Trump administration had reviewed its support for the UAE-Saudi coalition. “We determined it was the right thing to do in defense of their own countries, but also to restore the rightful government there,” he told the Times, adding, “[o]ur conduct there is to try to keep the human cost of innocents being killed accidentally to an absolute minimum.’’

The latest U.N. report suggests that the Saudi coalition and its Western allies cannot police themselves or take responsibility for actions that kill civilians, which, as the Post points out, “is often cited by Trump administration and British officials to justify the continued military support and arms sales to the coalition.”

“The assessment of the targeting process is particularly worrying, as it implies that an attack hitting a military target is legal, notwithstanding civilian casualties, hence ignoring the principle of proportionality,” the report says.

The U.S., Britain and France are all permanent members of the U.N. Security Council.

The report’s authors submitted a list of people “who may be responsible for international crimes” to U.N. Human Rights Commissioner Michelle Bachelet, but they do not specify names or say whether those individuals are from Britain, France or the U.S. Representatives from Saudi Arabia, the United Arab Emirates, Britain, France and the U.S. did not respond to the Post’s requests for comments.

Greta Thunberg’s Speech to World Leaders at the UN Climate Action Summit (Hold On To Your Seat!)