Coming from a country that doesn’t ‘do’ public transport and traveling to a place that does is always a treat for me. I recently spent time on trains and buses in Europe and believe we’re missing out on something important in New Zealand by condemning ourselves to car ownership. 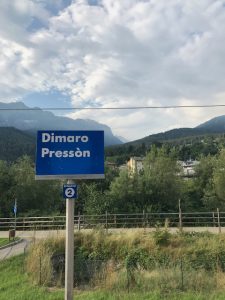 There is something different about a city where people get around by mass transit. They are calmer, more relaxed and nicer.

For novices like me, it can be scary at first trying to navigate the timetables, ticketing machines, and platforms, even the etiquette. But once that’s sorted (it’s mostly very user friendly), there’s nothing left to do but sit back and people watch while being transported with ease to the destination.

When we use public transport we’re at the mercy of the timetable. We either make it to the platform on time, or we don’t. This of course works when the timetable runs with precision and Europe seems to do this well. We could have set our clocks to the trains in Italy. This takes a lot of the unknown out of the equation. ‘How bad will the traffic be today?’ becomes non-existent.

When we’re driving our own vehicle from A to B, it inevitably comes with stress. This usually comes in the form of congestion, the symptom of so many growing towns and cities. We hate being ‘stuck in traffic,’ the realisation that we are the traffic often lost in our frustration at the way everyone else is driving. This leads to time delays. We were running late anyway, and now the traffic (everyone else’s fault) is bad, so we are not going to make that appointment on time. Then we have to find a park and pay the horrendous parking fee to get as close as possible to our destination.

We arrive flustered and frustrated and we haven’t connected with anyone. The only exception being an insult to the driver who wouldn’t let us in.

One observation I made during our journey was the willingness people had to help each other out to get on the right bus or train at the right time. Strangers were happy to help each other with information about timetables and platforms; there was a sense of community. The competition was gone.

There is also something to be said about sitting next to strangers.

Driving our own cars only ever offers us the chance to sit next to someone we’re comfortable with. Jumping on a train means you either take a seat next to a stranger or you stand, and the trip might be forty five minutes.

For people comfortable with public transport, sitting next to a person that ‘doesn’t look the same’ as them is nothing. It doesn’t even matter if no words are spoken, a connection is still made. They’re sharing space with that person for the duration of the trip, and it’s okay.

There is also an ease in the sense that there is nothing else to do. When you’re on your morning commute on the bus or train and you work in the city, your trip will take the time it takes. Forced relaxation can be a very healthy option.

For me, sitting still is hard, so when faced with approximately three hours of train travel up my sleeve, I took up that option. I actually enjoyed it. I got to stare out the window and look at the architecture, the river and the hills. I was able to process my thoughts and come up with new ones. I was able to do all of this without ever once having to focus on the traffic. 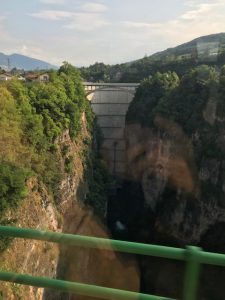 A stunning piece of architecture on route

I spent a lot of time watching other passengers as well. They were relaxed, some even slept, or read books, laughed with their friends, and others listened to music. Everyone had chosen public transport for their journey and they were used to this downtime. I can only imagine that this must in some way contribute positively to their day.

I often feel a sense of envy towards other mass transit passengers. They’re part of a system designed intentionally for them. In some cases, like the London Underground, the intention was there 156 year ago to connect people. This is what good transport infrastructure does. It understands that in order for a community to thrive, large amounts of people need to move about with ease and efficiency. Carbon emissions wasn’t even a thing in 1863, it was about people.

We spend a lot of time and money focusing on building more roads for more cars in New Zealand. It’s not the same. The only result we gain from this approach is more congestion, frustration and pollution. At an individual level, our focus stays inward as we each crawl along the motorways.

Whenever I travel, I always feel like I’ve had a true experience of a city or town after I’ve used the public transport. It feels so inclusive. I may not get to meet the other people on the bus or train, but I’ve shared an experience with them. I feel the same when I move about on designated pedestrian and cycle infrastructure.

Cities that allow their people to move about with ease, efficiency and en masse are on the right path. The design of our transport infrastructure should have as a principle, ‘owning a private vehicle is optional, not a necessity.’ Investment should go into the movement and connectivity of communities, which is distinctively different from the movement of cars.

The cities that understand this offer their citizens a sense of freedom that car-dependent cities just can’t.

Finally, the other thing I love about public transport is it’s an equaliser. Of course, this may not apply for longer, more exotic train trips (think The Oriental Express), and it’s true that there are few options left where the ‘first class experience’ hasn’t been monopolised. But on the morning commute, we are all ‘scum on the bus.’

Sometimes it’s a good thing to be reminded of our sameness in this respect—it’s where kindness can really flourish.

To Confront Climate Change, We Need an Ecological Democracy