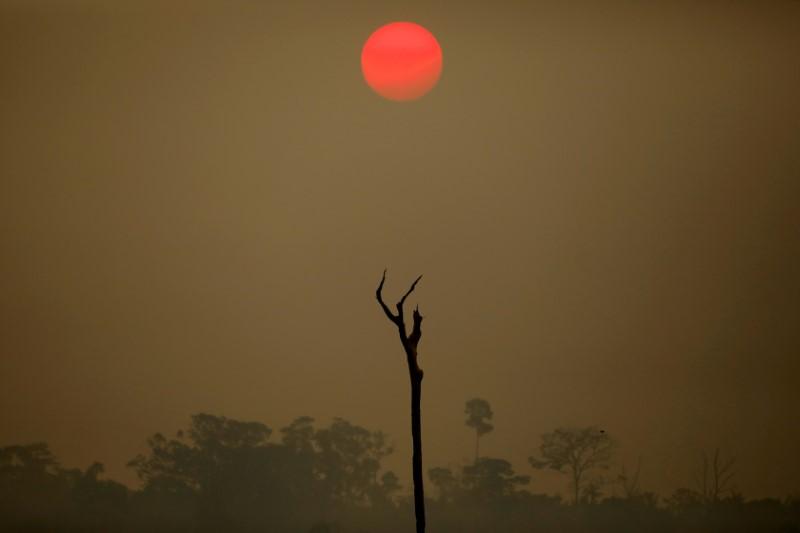 Of recent, there have been several deeply disturbing developments in the Amazon. Less than two months ago, the world’s leading Amazonian scientists, Thomas Lovejoy (George Mason University) and Carlos Nobre (University of Sao Paulo) issued a harsh warning to the people of the world: “Today, we stand exactly in a moment of destiny: The tipping point is here, it is now” (source).

Tipping points are final acts in nature, meaning points of no return for ecosystems, as functionality turns sour. Regarding the vastness of the Amazonian rainforest, its functionality is so worldly powerful that its loss is incomprehensible and likely indicative of an impending final act for civilized, as well as uncivilized, life on the planet.

Nevertheless, recklessly flirting with extreme potent danger, the “tipping point warning” by leading scientists is brushed aside by Bolsonaro’s government, as the Amazon rainforest suffers direct attack on all fronts; it’s like an Anti-Climate Change Crusade, meaning, clearing the planet of all life forms, except for humans, but that can only last for so long before “thudding humans” start reverberating throughout the planet.

Already, the belated impact of anthropogenic (human-caused) global warming over the decades has only now started clobbering the Amazon with three 100-year droughts, back-to-back-to-back every 5 years. It’s unprecedented, never happened before, until excessive levels of CO2 accumulated in the atmosphere.

According to NASA, serious, likely permanent, damaging episodes of drought in 2005, 2010, and 2015 have literally changed the Amazon, losing its special “carbon sink status.” As such, the Amazon’s sphere of influence in various regions throughout the rainforest transforms from preserving humanity via its powerful “carbon sink” capabilities to morphing into a shameful “carbon emitter,” same as coal-fired power plants spewing CO2, but not as sooty.

Unprecedented 100-year droughts occurring every five years sends a clear resounding signal to the world that something is horribly wrong.

Consider: According to NASA, the timing between drought sequences has impeded regrowth. The rainforest just doesn’t react like it used to. It does not have enough time between droughts to heal itself and regrow. Throughout all of recorded history, this has never been witnessed before. The implications are downright dreadful (source).

Meanwhile and regrettably, according to Brazil’s National Institute for Space Research, deforestation of the Amazon surged by 85% in 2019. Wall Street brokers would kill for a stock that increased by 85% in one year, and they would not blink an eye over a bloody mess, if necessary, to achieve such spectacular results, which, in a sense, is equivalent to the 85% Amazonian deforestation scenario. Which will likely get worse in 2020.

Not only that, killing indigenous tribal people is on the rise as private adventurers take Bolsonaro’s rightwing sentiments to heart, intruding into the Amazon. They’re armed for self-defense as well as to assault new lands. One never knows when a barefooted half-naked man carrying a thin wooden spear may appear from within the bush on his sacred homeland.

As if the situation couldn’t get much worse, the outlook for 2020 is simply awful! According to MapBiomas, a Brazilian organization in collaboration with universities, NGOs, and technology companies that monitor deforestation: “It would be expected that it will be worse than last year unless something really big happens in the next two or three months to avoid the high season of deforestation that starts in May (2020), according to Tasso Azevedo, coordinator of a group called MapBiomas” (source).

What’s worse than 85% deforestation? Is it 100% or maybe more now that Bolsonaro is so anxious to open up the Amazon to the deep-seated impulses of neoliberal-neocolonial capitalism: (1) privatize, (2) extract, (3) monetize, as quickly as humanly possible, no questions asked.

Going forward, and assuming the Bolsonaro Amazon Extraction Scheme works as planned and passes muster in the hallowed halls of The National Congress of Brazil (Brasilia), it likely puts at risk essential life-sourcing features of the Amazon: Without its wondrous strength and power to (1) generate hydrologic systems (rivers across the sky as far north as Iowa), (2) absorb and store carbon (CO2), and (3) provide its miraculous life-giving endless supply of oxygen, civilization would cease to exist beyond scattered tribes, here and there.

In all, it’s obvious where the Amazonian affair is headed, especially giving consideration to “civilization ceasing to exist beyond scattered tribes, here and there.”

Fortuitously, the infrastructure is already in place for that new world order. There are 305 Brazilian tribes, population 900,000, already in place to teach civilized society how to act and behave and live within natural ecosystems that fundamentally support the planet with vital life-giving resources… for free!

Postscript:  An excellent new film by ScientistsWarning.TV (Stuart Scott, Executive Director) “Rollbacks – An Assault Against Life on Earth” is an exposé of Trump’s attack on the environment. The link: https://www.youtube.com/watch?v=vUWZZTu0GAM&feature=youtu.be