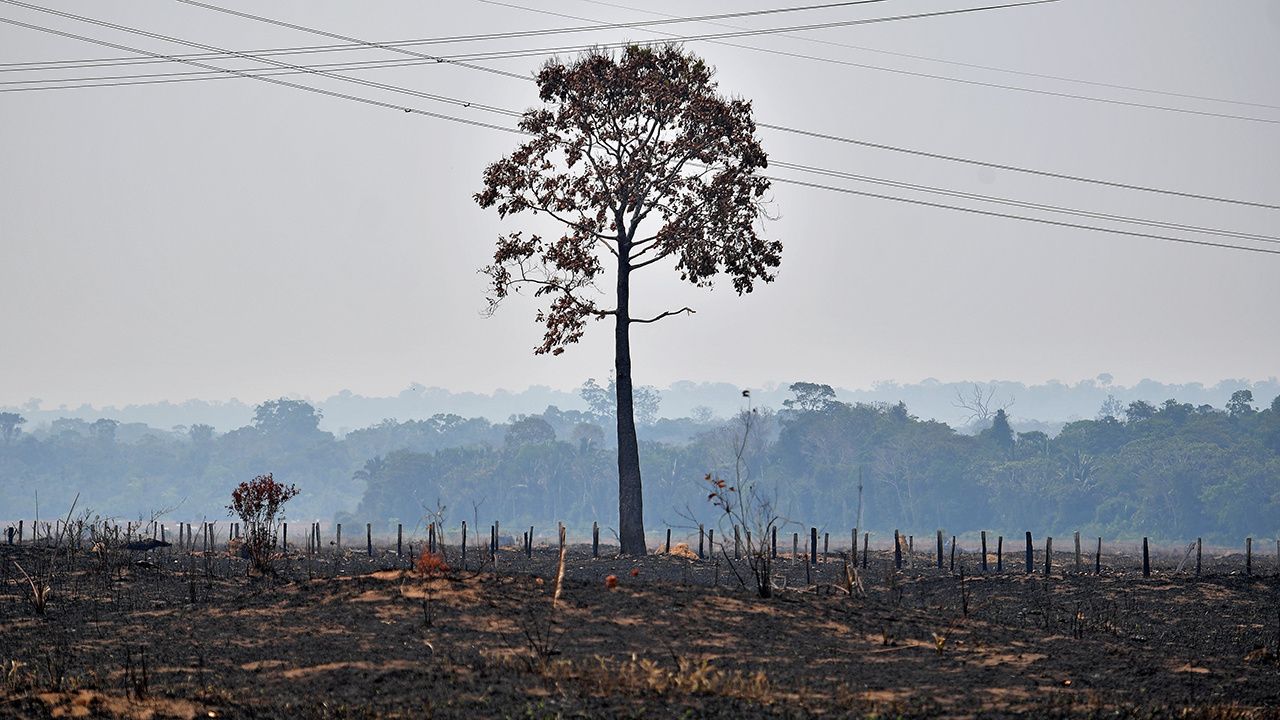 A lone burnt tree stands on a deforested area in the surroundings of Porto Velho, Rondonia State, in the Amazon basin in west-central Brazil, on Aug. 24, 2019. CARL DE SOUZA / AFP / Getty Images

Recent data is starting to show 2020 as another dire year. “The old paradigm was that whatever carbon dioxide we put up in [human-caused] emissions, the Amazon would help absorb a major part of it,” according to Sassan Saatchi of NASA’s JPL. (Source: NASA Finds Amazon Drought Leaves Long Legacy of Damage, NASA Earth Science, Aug. 9, 2018)

But serious episodes of drought in 2005, 2010 and 2015 are causing researchers to rethink that idea. “The ecosystem has become so vulnerable to these warming and episodic drought events that it can switch from sink to source depending on the severity and the extent,” Saatchi said. “This is our new paradigm,” ibid.

According to a detailed study: “Several studies indicate that the region has been suffering severe drought since the end of the last century, as in 1997/1998, 2005, 2010 and 2015. The intensity and frequency of these extreme drought episodes in the AB during the last years, approximately one episode every five years with a significant increase in the coverage area, is remarkable.” (Beatriz Nunes Garcia, et al, Extreme Drought Events Over the Amazon Basin: The Perspective from the Reconstruction of South American Hydroclimate, Departamento de Meteorologia, Instituto de Geociências, Universidade Federal do Rio de Janeiro, Nov. 7, 2018)

This year 2020 is shaping up to be a repeat performance, another “remarkable event.” Recent studies indicate: “The data suggests 2020 could be a particularly dire year for the Amazon.” (Source: “14 Straight Months of Rising Amazon Deforestation in Brazil,” Mongabay d/d June 12, 2020)

All of which begs the question: How much more abuse can the magnificent rainforest handle for how long?

However, hard-hitting droughts are not the only negative thing hitting the Amazon rainforest. Failure by political forces is also pounding the rainforest, as the Bolsanaro regime gooses abuse and overuse.  As a result, people are striking back. Civil society groups and public prosecutors in Brazil are taking President Jair Bolsonaro’s government to court for failing to protect the rainforest.

“The Amazon rainforest — 60 percent of which lies in Brazil — is one of the world’s great carbon sinks. Preserving its trees and plants is crucial to meeting international targets that limit global warming to well below 2 degrees Celsius above pre-industrial levels.” (Source: To Stop Amazon Deforestation, Brazilian Groups Take Bolsonaro to Court, Deutsche Welle, June 13, 2020)

Meanwhile, hydrologic studies clearly indicate the Amazon rainforest is “drying out.” Nothing could be worse.

Based upon current images, GRACE’s satellite shows an Amazon that is in tenuous condition in an unprecedented state of breakdown.

Within only the past few months, the world’s two leading Amazon rainforest scientists made a startling announcement. Thomas Lovejoy (George Mason University) and Carlos Nobre (University of Sao Paulo) reported: “Today, we stand exactly in a moment of destiny: The tipping point is here, it is now.” (Source: Amazon Tipping Point: Last Chance for Action, Science Advances, Vol. 5, no. 12, December 20, 2019)

Tipping points are the equilibrium between life and death.

Of recent, GRACE’s images detected large areas of Brazil’s Amazon and Cerrado biomes in what’s classified as “Deep Red Zones,” meaning severely constrained water levels. According to Rodell: “If we see normal to low precipitation this year, then there is potential for drought… I would be concerned.” (Source: Satellite Data Show Amazon Rainforest Likely Drier, More Fire-Prone This Year, Mongabay, April 23, 2020)

Rodell’s statement “If we see normal to low precipitation, then there is potential for drought,” is like a slap to the face, a wake up call, implying “normal precipitation” by itself will not get the job done. Problem: Precipitation has been way below normal for way too long.

Today’s potential for a fourth major drought within only two decades magnifies into a virtual horror show when conjoined with the recent record. According to NASA, damaging episodes of three-100/yr droughts back-to-back-to-back, 2005, 2010, 2015 have already undercut and damaged the stability of the Amazon ecosystem. Of major concern, it’s already starting to lose its special “carbon sink” status. That’s unprecedented.

The rainforest doesn’t react like it used to. It does not have enough time between droughts to heal itself and regrow. Throughout all of recorded history, this has never been witnessed. In a word, it’s a horribly dreadful discovery. (Source: NASA Finds Amazon Drought Leaves Long Legacy of Damage, NASA Earth Science News Team, August 9, 2018)

In many respects, the Amazon ecosystem is a facsimile of the larger biosphere but more sensitive to climate change, similar to the Arctic. In other words, some ecosystems are ultra-sensitive to changes in the climate system and thus serve as proxies or early warning signals prior to recognition of the looming threat by civilization at large. Meantime, whilst climate change disrupts ecosystems on the fringes of civilization, society comfortably exists in artificial complexities of concrete, steel, glass, and wood within a vast chemically induced world that only recognizes the danger of collapsing ecosystems after it’s too late. Then, it is too late!

Meanwhile, Amazon deforestation is on a bender. According to INPE (National Institute for Space Research in Brazil National Penitentiary Institute), it’s up 40% since January.

“The rise in deforestation troubles scientists who fear that the combination of forest loss and the effects of climate change could trigger the Amazon rainforest to tip toward a drier ecosystem which is more prone to fire, generates less local and regional rainfall, sequesters less carbon from the atmosphere, and is less hospitable to species adapted to the dense and humid forests of lowland Amazonia.” (Source: Rhett A. Butler, 14 Straight Months of Rising Amazon Deforestation in Brazil, Mongabay, June 12, 2020)

The question arises, what is the impact of deforestation?

For starters, hands down, it’s the leading cause of extinction on the planet. Secondly, forest loss contributes approximately 15%-20% to increased levels of greenhouse gas emissions as loss of forests’ mass removes one of the planet’s natural carbon sinks. Additionally, forests play a critical role in the hydrological cycle, all the way north to Iowa’s cornfields with remarkable “rivers in the sky.”

A long list of additional major benefits could be enumerated, but suffice it to say that, of significant interest, scientists have discovered up to one-half of all trees greater than 4 inches in diameter in the Amazon are more than 300 years old, some 1,000 years old.

Ergo, artificial life supplants hundreds and thousands of years of nature with one quick cut of a buzz saw, but in all honesty, 300-year-old trees take quite a bit longer than one quick cut.