The implementation of the safe decommissioning of the Fukushima Daiichi nuclear power station is a unique complex case and expected to span several decades: the IAEA Review Team considers that it will therefore require sustained engagement with stakeholders, proper knowledge management, and benefit from broad international cooperation.

The bland language of the official IAEA report is itself a form of lying, offering the false appearance of reassurance that a catastrophic event will be safely managed “for several decades.” There is no way to know that: it is a hope, a prayer, a form of denial. The IAEA, as is its job in a sense, offers this optimism that is unsupported by the realities at Fukushima.

On April 14, 2019, Japan’s prime minister, Shinzo Abe, visited the Fukushima meltdown site. According to The Asahi Shimbun’s headline, “Abe [was] pushing idea that Fukushima nuclear disaster is ‘under control’.” Abe entered the site wearing a business suit and no protective clothing to shield him from radiation. He stood on elevated ground about 100 meters from a building holding one of the melted-down reactors. He had his picture taken. He told reporters, “The decommissioning work has been making progress in earnest.” Abe’s visit lasted six minutes. This was a classic media pseudo-event, designed to be reported despite its lack of actual meaning – for all practical purposes it was another nuclear lie.

The entire Fukushima site remains radioactive at varying levels, from unsafe to lethal, depending on location. The site includes six reactors, three of them in meltdown, and at least as many fuel pools, some of which still contain fuel rods. The site has close to a thousand large storage tanks holding more than a million tons (roughly 264.5 million gallons) of radioactive wastewater.

Translation: the Prime Minister was posing in an area of dangerous radiation level and pretending it was all fine. Call it lying by photo op.

Now, more than eight years after the triple reactor meltdown at Fukushima, the status of the three melted reactor cores remains somewhat contained but uncontrolled, with no end in sight. No one knows exactly where the melted cores are. No one has any clear idea of how to remove them or how to dispose of them safely. For the foreseeable future, the best anyone can do is keep the cores cooled with water and hope for the best. Water flowing into the reactors and cooling the cores is vital to preventing the meltdowns from re-initiating.

Clean groundwater continues to flow into the reactors. Then radioactive water flows out into the Pacific. Continuously. A frozen ice wall costing $309 million diverts much of the groundwater around the site to the Pacific Ocean. The water flow is not well measured. Some contaminated water is stored on site, but the site’s storage capacity of 1.37 million tons of radioactive water may be reached during 2020.

One proposed wastewater solution is to dilute the stored radioactive water and then dump it in the Pacific. Fukushima fishermen oppose this. Radioactivity in Fukushima fish has slowly declined since 2011, but the local fishing industry is only at 20 percent of pre-meltdown levels.

When it exists, reporting on Fukushima continues to be uneven and often shabby, buying into the official rosy view of the disaster, as The New York Times did on April 15. The day after Abe’s visit to Fukushima, the Times reported that an operation to begin removing fuel rods from a fuel pool was a “Milestone in Fukushima Nuclear Cleanup.” The Times, with remarkable incompetence, couldn’t distinguish clearly between the fuel pool and the melted reactor cores:

The operator of Japan’s ruined Fukushima nuclear power plant began removing radioactive fuel rods on Monday at one of three reactors that melted down after an earthquake and a tsunami in 2011, a major milestone in the long-delayed cleanup effort….

The plant operator, Tokyo Electric Power, said in a statement that workers on Monday morning began removing the first of 566 spent and unspent fuel rods stored in a pool at the plant’s third reactor. A radiation-hardened robot had first located the melted uranium fuel inside the reactor in 2017.

The summer Olympics are planned for Tokyo in 2020. In 2013, two years after the Fukushima meltdowns, Prime Minister Abe pitched the Tokyo site by telling the Olympic Committee in reference to Fukushima: “Let me assure you, the situation is under control.”

This was a lie.

Even now, no one knows where the melted reactor cores are precisely. One robot has made one contact so far. Radiation levels at the core are lethal. There is, as yet, no way to remove the cores safely. They think they’re going to remove the cores with robots, but the robots don’t yet exist. The disaster may not be as out of control as it was, but that’s about the best that can be honestly said, unless there’s another tsunami.

Official government statistics show pediatric cancers almost doubling since the Fukushima meltdowns of 2011. Thyroid cancers are reaching epidemic levels. The Japanese government refuses to track leukemia and other cancers. The official Fukushima death toll is more than 18,000, including 2,546 who have never been recovered. Most of Fukushima prefecture remains uninhabitable due to high radiation levels.

On March 21, 2019, Dr. Helen Caldicot offered an assessment much closer to the likely truth:

They will never, and I quote never, decommission those reactors. They will never be able to stop the water coming down from the mountains. And so, the truth be known, it’s an ongoing global radiological catastrophe which no one really is addressing in full. 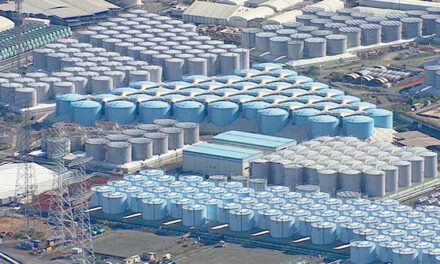