“We, as a global society, are at a crossroads.”

Why Global Citizens Should Care
The United Nations urges countries to pursue bold climate action policies to achieve the goals of the Paris climate agreement. Youth protest movements are holding leaders accountable and creating the impetus for action. You can join us in taking related actions here.

The world’s youth have infused a new urgency into the global fight against climate change.

Through movements like Fridays for Future and Extinction Rebellion, millions of young people have gathered in public squares and busy streets, senate chambers and assembly rooms, to call on government leaders to curb greenhouse gas emissions and enact meaningful environmental policies.

Now they’re planning to come together for a grand climate strike on Sept. 20. The “Strike With Us” march aims to get as many people into the streets as possible to underline the fact that climate change affects everyone and demands a global solution.

The intergenerational day of striking will take place in cities and towns worldwide but it will revolve around the march in New York, where organizers hope to inspire world leaders gathering for the UN’s climate summit on Sept. 23.

Climate activist Greta Thunberg will be speaking at the New York strike as part of a broader effort to galvanize climate action.

The climate summit is part of the annual United Nations General Assembly week, during which member states give speeches and negotiate on global issues. The climate summit is meant to be a platform for countries to update climate commitments made under the Paris climate agreement, which seeks to keep global temperatures from rising more than 1.5 degrees Celsius above pre-industrial levels, and to set a bold agenda for environmental policy through 2030.

Read More: 17 Photos You Have to See From London’s Extinction Rebellion Climate Protests

The power of youth activism has been made abundantly clear in recent months. In response to growing protest movements, hundreds of governments have declared climate emergencies, companies have committed to the Paris climate agreement, and awareness of climate change has skyrocketed.

For young people, climate change isn’t a theoretical problem to be debated on talk shows and in opinion sections. Instead, it’s a rapidly escalating crisis that threatens to undermine their future.

Already, people around the world are dealing with the consequences of climate change.

“In Lerma, the rainfall of 2015 flooded my town, new factories contaminated the air, and buildings were sinking into wetlands,” Xiye Bastida, a climate justice activist from Mexico, said in a press release. “Economic instability and air pollution were the things that pushed my family out of my home.

“This crisis is our present, but we cannot let it be our future,” he said. “That’s why youth across the globe are uniting against corporate power, against climate racism, and against the deterioration of Mother Earth.” 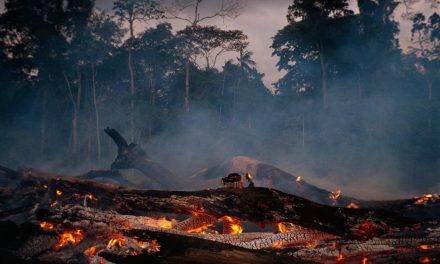 How Amazon Forest Loss May Affect Water—and Climate—Far Away