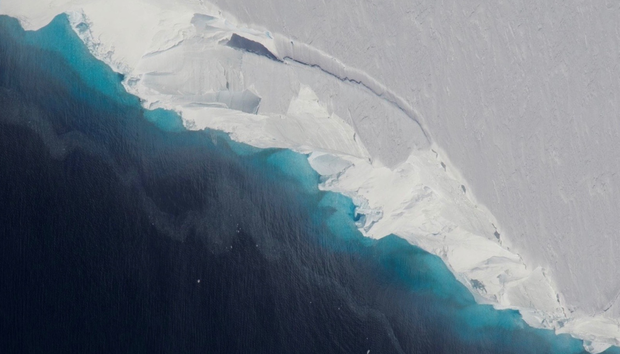 Thwaites, in West Antarctica, is the world’s most dangerous glacier. As of January 15th, scientists have labeled it: “A Climate Time Bomb.”

Thwaites is crumbling apart on the underneath side where warm ocean currents circulate, which is clear evidence that global warming is really, truly hitting its stride even as America, obeying President Trump’s orders, rejected its commitment to Paris ’15, a major climate agreement of almost all the nations of the world.

In point of fact, America is too focused on ceaseless (mindless) NYSE trading at new heights to give even a passing thought to something as remote as Thwaites Glacier crumbling apart from inside-out (9,072 miles away, forever far away in the mindset of simple-minded folks).

Still, the cold, hard facts are irrefutable, to wit: NASA’s studies, referenced as “IceBridge,” have revealed an enormous cavity lurking beneath the icy surface of Thwaites; it’s the size of NYC hidden within its core. Along the way, Thwaites glacier loses 35B tons of mass per year.

Beyond question, “What happens at Thwaites affects the whole ice sheet.” (Source: Adam Vaughan, Antarctica’s Doomsday Glacier is Melting. Can we Save it in Time? NewScientist, Jan. 15, 2020).

After all, Thwaites is the primary backstop for the entirety of West Antarctica, which contains enough ice to take sea level up 11-12 feet. If Thwaites collapses, it’ll trigger an impending collapse of monstrous proportions. Although, truth told, nobody knows the timing, decades or centuries before serious collapse occurs, but judging by recent behavior, Thwaites is giving off plenty of chilling tipoffs, enough to generate some cold-sobered pause and very deep thought.

Thwaites Glacier is 100 miles across and 4,000 feet deep. It’s melting a lot earlier and much, much, much faster than ever thought possible. That’s bizarre since the glacier, ever since the dawn of humanity, has been a permanent feature on West Antarctica.

Meantime, in the face of crumbling ecosystems found at the fringes of civilization, where the initial impact of global warming is felt first, the United States, under the direction of President Trump, dismantles decades of federal regulations that protect life and ecosystems. Nearly 100 federal regs designed to curb climate change, protect human health, and limit ecosystem ruination are being rolled back. It’s Trump’s infamous Great Dismantling of Federal Agencies (GDFA).

As for the status of America’s scientists, Trump is their worst nightmare come true in full living color, orange. No president throughout the history of America comes close to his purity of ignorance and utter failure to understand basic words, concepts, and rudimentary science. After all, it was his own secretary of state, Rex Tillerson, who said, “He’s a f__king moron!” (Vanity Fair, May 23, 2019)

As for Thwaites, the good news is it will take hundreds of years for the final ice of West Antarctica to melt away. However, along the way, possibly sooner rather than later, the bad news is that it will likely wreak unimaginable havoc, meaning big time damage, by altering coastlines around the world, year-by-year, decade-by-decade, and inch-by-inch, but over time stretching to foot-by-foot. It’s an extraordinarily dangerous prognosis, filled with all kinds of challenges for the world’s coastal metropolises.

Significantly, and most importantly, the implied message within the NewScientist article is: Somebody in a position of authority in the world with powerful leadership skills (forget the U.S.) must wake up to the fact that global warming has already started taking human civilization down for the count, down to its knees… already in its earliest stages at the furthest latitudes, where it is hitting real hard, e.g., Thwaites’ internal ice collapse.

Thwaites Glacier, as big as the country of Great Britain, is but one of several examples of early stage ecosystem collapse in the world, but people don’t live where it’s happening. Who sees it other than scientists?

Alarmingly, Thwaites’ ice loss has doubled over the past two decades to 35B tonnes per year; that fact, standing alone, sends a haunting message. In time, Thwaites will account for 2 feet of sea level rise. But that’s only the start of a much, much bigger dilemma as it buttresses the West Antarctic Ice Sheet.

It was only 5 years ago when scientists confidently said the Western Antarctica Ice Sheet collapse had officially started but those same researchers said: “Even though sea level rise (10-13 feet) cannot be stopped, it is still several centuries off, and potentially up to 1,000 years away.” No sweat!

Now… they are sweating.

The Rights of Nature with Mari Margil and Thomas Linzey