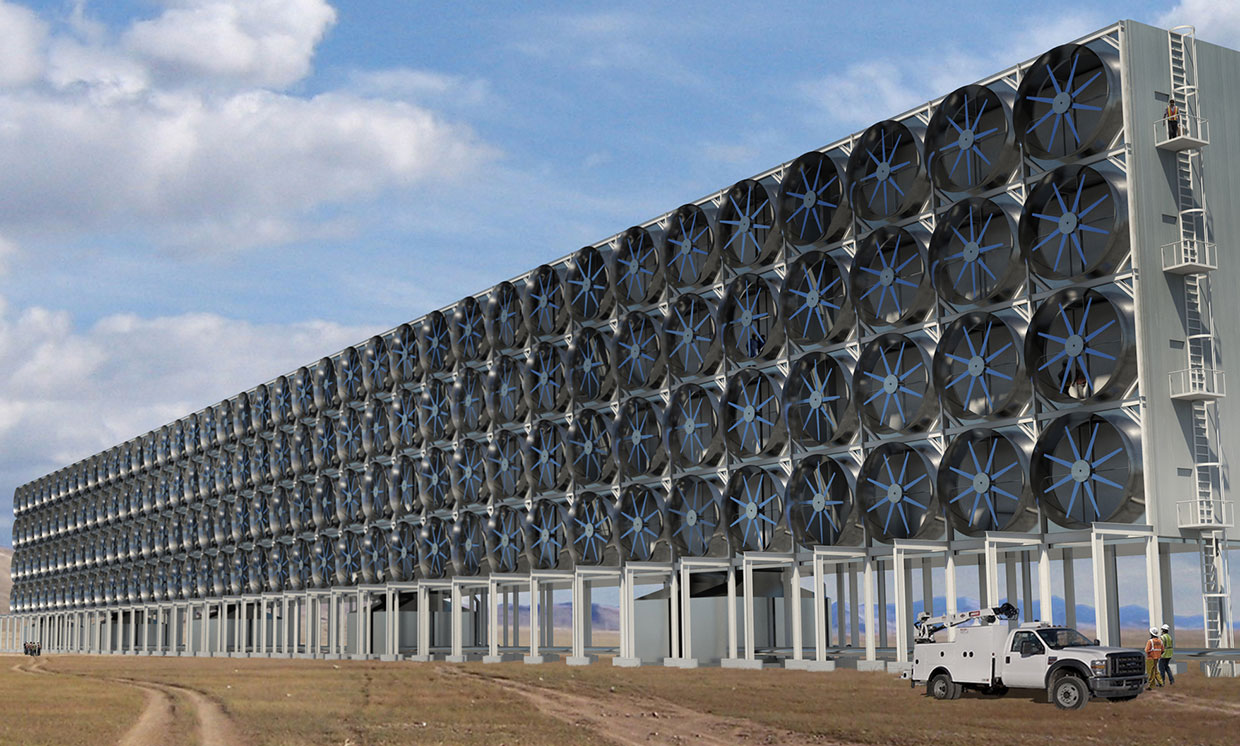 A direct air capture machine (or at least an artist’s rendering). Carbon Engineering

By implication, the oil giants are clearly aware of what’s at stake: (a) the planet is stressed almost beyond limits; (b) there’s some money to be made trying to fix it; and (c) it’s a great PR gig. But, the problem is much bigger and more complex than oil and gas betting on early stage development of technology to capture the same emissions they created in the first instance. Direct air capture is complex and expensive with sizeable infrastructure requirements, explained in further detail hereinafter, a real eye-opener.

Ironically, expectantly, without doubt, big oil is bellying up to this task with eyes wide open. They have a lot to gain and very little to lose. In point of fact, it’s a win-win for these provocateurs of insane atmospheric levels of CO2 emissions, the highest of the Holocene Epoch, our unique Goldilocks Era, not too hot, not too cold, suddenly coming to a crescendo of excessive exploitation within only a couple hundred years of the entire 12,000-year history.

It’s worth noting that ever since the Drake Well in 1859, the first commercial oil well in the United States, big oil’s interest in the planet has been adversarial, especially in actual practice. As a consequence, the planet’s atmosphere and ecosystems need a thorough overhaul: (1) remove CO2 via direct air capture; (2) carbon capture and sequestration of CO2 at the point of production; 3) construction of renewable energy facilities.

It’s a sizeable task that’s nearly impossible to fully comprehend and in fact impossible to wrap arms around because it’s the planet; it’s really big! The scale of infrastructure that’s required to make a significant difference is beyond a Marshall Plan prototype, which would be a blip on direct air capture’s radar.

It’s questionable that it can come together fast enough in the face of a very risky 1.5°C global overshoot. That probability increases, as the Paris ‘15 signatories have not met voluntary commitments to cut emissions. They’re mostly putting up zeros, so far. In addition to abject failure by the signatories, concerns about global warming ratcheted upwards subsequent to Paris ’15. In 2018, the Intergovernmental Panel on Climate Change (IPCC) drew a line in the sand at 1.5°C, beyond which risk factors for planet viability turn a whole lot worse.

Exxon/Mobil and Microsoft are funding carbon air capture R&D projects. These entrepreneurial interests have likely been piqued by acceptance of the fact, finally, that exhaust fumes from industry and transport are a heavy burden on the planet. Already, major ecosystems are starting to collapse; for example, the Great Barrier Reef, the poster-child of global warming, has experienced unprecedented bleaching, three events in only five years, losing over one-half of its quintessence to global warming in only 25 years, categorized “in critical condition” by UNESCO.

Exxon Mobil and Global Thermostat have a joint development agreement for “breakthrough” technology that removes CO2 directly from the atmosphere via direct air capture (DAC). Currently, technical developments appear to be very costly, at least 50 times more per metric ton at $330-800 per ton of CO2 than natural climate solutions. However, as part of the process, captured/processed CO2 is a marketable byproduct and can be sold for numerous purposes, e.g., pumped into an operating oil well to enhance oil recovery, which, of course, is where CO2 initiated in the first instance. This is a preferred modus operandi for some oil operations, which unfortunately also leads to endless production of fossil fuels in a perpetual madness that enhances oil-driven vehicles, air pollution, and global warming, spewing more CO2 into the atmosphere, which allegedly is recaptured, but is it really? Oh, almost forgot, and lots more ocean absorbing of CO2. Along the way, oil PR departments claim “green energy” with signage on full public display. Meanwhile, direct air capture or the impression of such opens a window to perpetual drilling, as big oil continues to spud 50,000 new wells every year.

There are currently 15 operational DAC plants in the world. Carbon Engineering, a Canadian company, has a plant under construction in the Permian Basin in partnership with Oxy Low Carbon, a subsidiary of Occidental Petroleum (Oxy’s PR department must be thrilled over its “Oxy Low Carbon” designation). The plant will open in 2024 at the rate of 1,000,000 metric tons of captured CO2 per year versus 4,200,000 metric tons of CO2 emitted worldwide per hour… yes, per hour. The Oxy Low Carbon facility is energy-intensive, powered by natural gas and renewables. The captured CO2 can be injected into the ground, sequestered or converted into a synthetic fuel and sold on the market.

Carbon Engineering’s investors include Bill Gates, BP, and Chevron. Their goal is to build plants around the world. As such, the company claims it needs the technological skill and experience of major oil, which has infrastructure and technology expertise.

Another up and coming player in carbon removal is Climeworks, operating 14 direct air capture plants across Europe and currently building its largest facility in Iceland. Current operations capture 2,000mt CO2/year. They have an Iceland plant named Orca under construction powered by geothermal energy that will capture 4,000mt CO2/year. The captured CO2 is permanently sequestered underground. Costs to operate the plant run $600-800/metric ton CO2, which hopefully drops to $100-200/mt within 10 years. In addition to sequestering CO2, Climeworks sells some of its captured product, e.g., a greenhouse in Switzerland is a customer, using it to grow vegetables. Climeworks hopes to capture 1% of global CO2 emissions by 2025.

For direct air capture to really truly work, to do the job, meaningfully saving the planet, it’ll need lots of support by the nations of the world. Commercial interests agree on that basic supposition. The job is too big, too important, and too urgent for piecemeal work by several individual upstart operations.

Direct air capture is not a magic bullet. According to Lucas Joppa, Chief Environmental Officer of Microsoft: “You have to deploy all carbon removal opportunities to their maximum capacity. That is the only way that we will reach our overall societal climate targets. DAC is going to be an important part of how we reach a net zero carbon economy, but there are a lot of engineering challenges ahead of it, and we need to be clear-eyed about that. Otherwise there’s going to be a lot of dashed hopes and missed targets as we go from 2020 to 2030 and 2040 and 2050.” (CNBC)

Of course, corporate funding is an encouraging factor, but there is a darker side to this story. Since 1950 when worldwide CO2 emissions registered 5.99B tons, emissions have increased 5-fold within only 70 years, skyrocketing to 36.42B tons in 2019 versus 23B tons at the turn of the century, or up 58% in only 20 years. That’s serious acceleration, and it readily fulfills an extraordinarily sharp upward thrusting growth curve. It’s even more remarkable given the fact that 4,200,000 mt of CO2 is emitted per hour worldwide. That makes the Oxy Low Carbon plant at 1,000,000mt/year look awfully low.

In reality, direct air capture is enormously challenging: (1) massive volumes of air have to be pulled to truly make it work; (2) a chemical solution, like potassium hydroxide, is required to capture CO2; (3) more chemicals are added with a resulting solution heated to make white pellets of 50% CO2; (4) in turn, pellets are heated again to 900°C to concentrate CO2 into a gas that can be sequestered underground. Whew!

According to renowned physicist Klaus Lackner, director of the Center for Negative Carbon Emissions, in order to stay abreast of current emissions: “If you built a hundred million trailer-size units you could actually keep up with current emissions.” (Source: Elizabeth Kolbert, Can Carbon-Dioxide Removal Save the World? The New Yorker, Nov. 20, 2017)

Here’s more of that New Yorker interview: “Lackner has calculated that an apparatus the size of a semi trailer could remove a ton of carbon dioxide per day, or three hundred and sixty-five tons a year. The world’s cars, planes, refineries, and power plants now produce about thirty-six billion tons of CO2 annually, so, he told me, ‘if you built a hundred million trailer-size units you could actually keep up with current emissions.’ He acknowledged that the figure sounded daunting,” Ibid.

Umm, in reference to Lackner’s hundred million units necessary to “keep up with current emissions,” what about the CO2 that’s already up there? Moreover, Lackner’s acknowledgement of “the figure sounds daunting” is quite true and quite intimidating, as one hundred million (100,000,000) 55-foot units end-to-end circumnavigate the planet 42 times. Do the math!

Ergo, direct air capture requires, desperately needs, frankly depends upon a coordinated herculean effort by every major nation of the planet. How’s that for scale? Hopefully, Paris ’15 is not a leading indicator of responsiveness by countries to a much bigger project than their failure to reduce emissions at the source.

In all, a cynic might suppose there’s something cagey going on with the world’s biggest corporations, over-weighted by oil producers, now feigning green. Yes, it seems too far out of character to be genuine. Is it possible that boards of directors of oil and gas operators believe they can keep on draining the world’s oil, unimpeded, as long as direct air capture is in the works or as long as the public deems it to be in the works, or is this an overly cynical viewpoint? Answer: Yes and no.

Postscript: The following message exposes dregs of society in acts of absurdity and folly: Under an obscure treaty, big polluters are suing governments for billions of dollars when they shut down coal plants and oilrigs ($50B so far of taxpayer’s money). You can help stop this insanity by going to: https://secure.avaaz.org/campaign/en/energy_charter_treaty_loc/?klYiZrb