If Fukushima’s Water is Safe, Then Drink it! 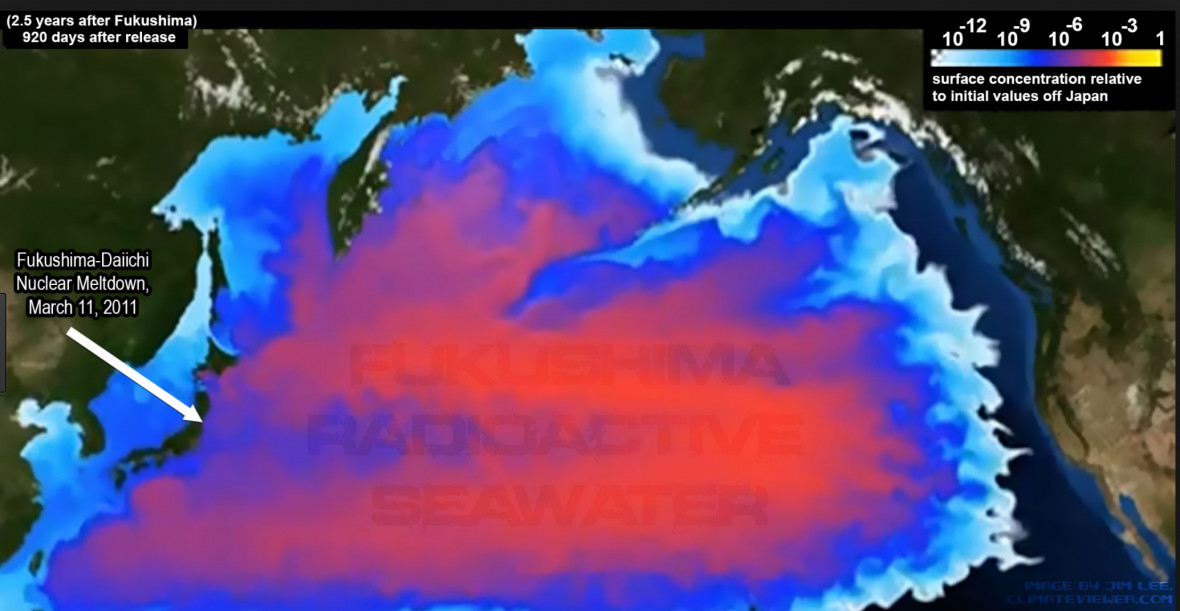 Models predict the highest concentration of Radioactive Waste will be in the North Pacific Gyre.

By now, the world knows all about the decision by Japan to dump tritium-laced radioactive water into the Pacific Ocean. According to Japan’s Deputy Prime Minister Taro Aso, the treated and diluted water will be “safe to drink.” Furthermore, he claims the country should have started releasing it into the ocean earlier. (Source: China to Japan: If Treated Radioactive Water From Fukushima is Safe, ‘Please Drink It’ Washington Post, April 15, 2021)

In response to Deputy PM Aso, Chinese Foreign Minster Lijian Zhao replied “the ocean is not Japan’s trashcan” and furthermore, since Japan claims it’s safe to drink, “then drink it!”

Mr. Zhao may have stumbled upon the best solution to international concerns about TEPCO (Tokyo Electric Power Company) dumping tritium-laced radioactive water into the Pacific Ocean. Instead, TEPCO should remove it from the storage tanks at Fukushima Daiichi Nuclear Power Station and deliver it to Japan’s water reservoirs where, similar to the ocean, it will be further diluted but not quite as much. After all, the International Atomic Energy Agency/Vienna (IAEA) and the Japanese government are full of praise and confidence about how “harmless” the radioactive water will be. Let Japan drink it and/or use it for crop irrigation!

Japan has approximately 100,000 dams of which roughly 3,000 are over 15 meters (50’) tall for flood control, water supply and hydroelectric power, some of which are used exclusively for irrigation of crops. These water reservoirs are more than adequate to handle TEPCO’s “harmless” radioactive water. In a straightforward approach, Japan should use water trucks to haul the Fukushima radioactive water to various dam reservoir locations throughout the country. The bigger the reservoir, the better it’ll be for dumping/dilution purposes.

For example, one of the largest drinking water reservoirs in Japan is Ogouchi Reservoir, which holds 189 million tons of drinking water for Tokyo. TEPCO is currently storing 1.3 million tons of radioactive water at Fukushima Daiichi and nearing full capacity. Ogouchi alone should be able to handle at least 1/4, and maybe up to 1/2, of the radioactive water without any serious consequences, especially as both the IAEA and the government of Japan have clearly given thumbs up. No worries, it’s safe.

The citizens of Tokyo should be okay with this plan since their own government and the IAEA and the U.S. have re-assured the world that dumping Fukushima’s radioactive water into a large body of water is safe, in fact, safe enough to drink. Eureka! Problem solved!

With the blessing of the IAEA and the U.S. via Biden’s Climate Envoy John Kerry, Japan’s government plans to start releasing radioactive water from Fukushima Daiichi’s water storage tanks into the sea effective 2022, allegedly removing the toxic deadly isotopes like Cesium-137, leaving behind less deadly toxic tritium. Why not dump that “harmless water” (according to Japan’s own statements) into their water systems rather than into the sea? It doesn’t make sense to dump drinkable water (according to Japan’s Deputy PM) that simply needs a bit of dilution in a larger body of water, like the sea, when reservoirs are nearby to put it to good use and of adequate size to effectively dilute the toxic water, similar to the ocean.

Identical to all radioactive substances, tritium is a carcinogen (causes cancer), a mutagen (causes genetic mutation), and a teratogen (causes malformation of an embryo). The good news: Tritium is relatively weak beta radiation and does not have enough energy to penetrate human skin. The main health risks are ingesting or breathing the tritium-laced water in large quantities.

Cancer is the main risk to humans ingesting tritium. When tritium decays it emits a low-energy electron (roughly 18,000 electron volts) that escapes and slams into DNA, a ribosome or some other biologically important molecule. And, unlike other radionuclides, tritium is usually part of water, so it ends up in all parts of the body and therefore, in theory, can promote any kind of cancer. But that also helps reduce the risk because tritiated water is typically excreted in less than a month. (Source: Is Radioactive Hydrogen in Drinking Water a Cancer Threat, Scientific American, Feb. 7, 2014)

Some evidence suggests beta particles emitted by tritium are more effective at causing cancer than the high-energy radiation such as gamma rays. Low-energy electrons produce a greater impact because it doesn’t have the energy to spread its impact. At the end of its atomic-scale trip, it delivers most of its ionizing energy in one relatively confined track rather than shedding energy all along its path like a higher-energy particle. This is known as “density of ionization.” As such, scientists say any amount of radiation poses a health risk. (Source: How Radiation Threatens Health, Scientific American, March 15, 2011)

“Tritium can potentially be hazardous to human health because it emits ionizing radiation, exposure to which may increase the probability that a person will develop cancer during his or her lifetime. For this reason, it is very important that human exposure to any radioactive material, such as tritium, is minimized within reason.” (Source: HPS- Health Physics Society, Specialists in Radiation Safety, Tritium Fact Sheet, March 2011)

Perhaps TEPCO, the government of Japan, the U. S., and the IAEA are counting on the hedged statement in the aforementioned paragraph as their primary rationale for dumping radioactive water into a larger body of water: It’ll be “minimized within reason.” Hmm.

In point of fact: “The storage tanks now hold seawater that has been used to continue cooling the reactor cores, and this water is contaminated with such radionuclides as Cesium-137, Carbon-14, tritium (including the more dangerous “Organically Bound Tritium”), Strontium-90, Cobalt-60, Iodine-129, Plutonium-239 — and over 50 other radionuclides. Some of this has reportedly been removed, but some has not (e.g. radioactive tritium and C-14). The Tokyo Electric Power Company (TEPCO) that owns Fukushima, and is now responsible for the cleanup (that is likely to last the remainder of this century), didn’t admit until recently that the wastewater contains significant amounts of radioactive Carbon-14. As C-14 has a half-life of 5,730 years, and is known to bio-accumulate in marine ecosystems and cause cellular and genetic impairment, this is a very serious concern.” (Source: Rick Steiner, The Danger of Japan Dumping Fukushima Wastewater into the Ocean, The Hill, April 17, 2021)

According to the aforementioned article, TEPCO’s treatment system is subpar and likely not up to the task of thorough cleansing.

Furthermore, according to Ken Buesseler, marine chemist at Woods Hole Oceanographic Institution: “Would this open the door for any country to release radioactive waste to the ocean that is not part of normal operations?” (Source: Japan Plans to Release Fukushima’s Wastewater into the Ocean, Science, April 12, 2021)

Based upon the news flow on the international front, Japan’s government did not consult its neighbors about the plan. China issued a warning, “the international community is watching” calling on Tokyo to “fulfill its international responsibilities to the environment.” A harsh South Korean Foreign Ministry complaint said Japan will “directly and indirectly affect the safety of the people and the neighboring environment… difficult to accept… without sufficient consultation of neighbors.” Meanwhile, local Japanese fishermen are fit to be tied because dumping radioactive water into the ocean is essentially a death sentence for their industry.

On the other hand, the International Atomic Energy Agency (IAEA) is just fine with the scheme since it meets “global standards.” They say it’s a normal process for nuclear plants around the world to release some amount of tritium into the seas. There is nothing positive about that, nothing whatsoever.

Greenpeace/Japan has expressed strong reservations, more than once, about the comprehensiveness and adequacy of the removal cleansing process, claiming that several highly toxic/deadly radioactive isotopes remained after processing. Who knows whether this still holds true?

It is highly unlikely that the international community, other than the United States, will ever be totally comfortable with Japan’s decision to dump toxic radioactive water into the sea. Therefore, the country should take it upon itself to dispose of all radioactive water in their extensive network of water reservoirs.

Of course, nuclear power advocates argue that it’s insane to dump the radioactive water into any body of water other than the ocean because of its massive circulation capabilities, which will disperse the radioactive water throughout the world. But, that’s precisely what other countries do not want!

Deliberately, Japan has made the problem a simple one to deal with by publicly admitting that the treated water will be harmless, good enough to drink. As follows, they can keep it. Enough said!

Revealed: How the Global Beef Trade Is Destroying the Amazon

India – Birds Drop Out of the Sky, People Die