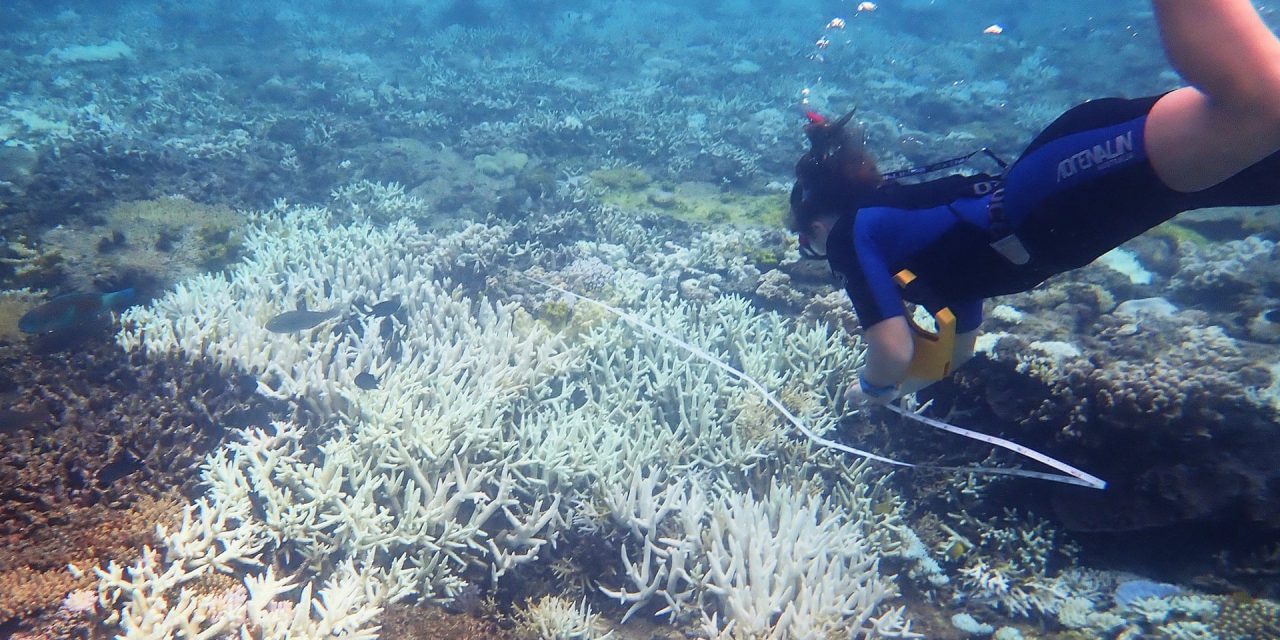 Coral bleaching at Heron Island, which did not bleach during the 2016-17 mass bleaching. Photograph: Charlotte Page

Written by Graham Readfearn and Adam Morton / The Guardian

The Great Barrier Reef has experienced a third mass coral bleaching event in five years, according to the scientist carrying out aerial surveys over hundreds of individual reefs.

With three days of a nine-day survey to go, Prof Terry Hughes told Guardian Australia: “We know this is a mass bleaching event and it’s a severe one.”

It follows the worst outbreaks of mass bleaching on record killing about half the shallow water corals on the world’s biggest reef system in 2016 and 2017.

Hughes, director of the ARC Centre of Excellence for Coral Reef Studies at James Cook University and one of the world’s leading authorities on bleaching and the Great Barrier Reef, said: “We know enough now that [the bleaching] is more severe than in 1998 and 2002. How it sits with 2016 and 2017 we are not sure yet.” 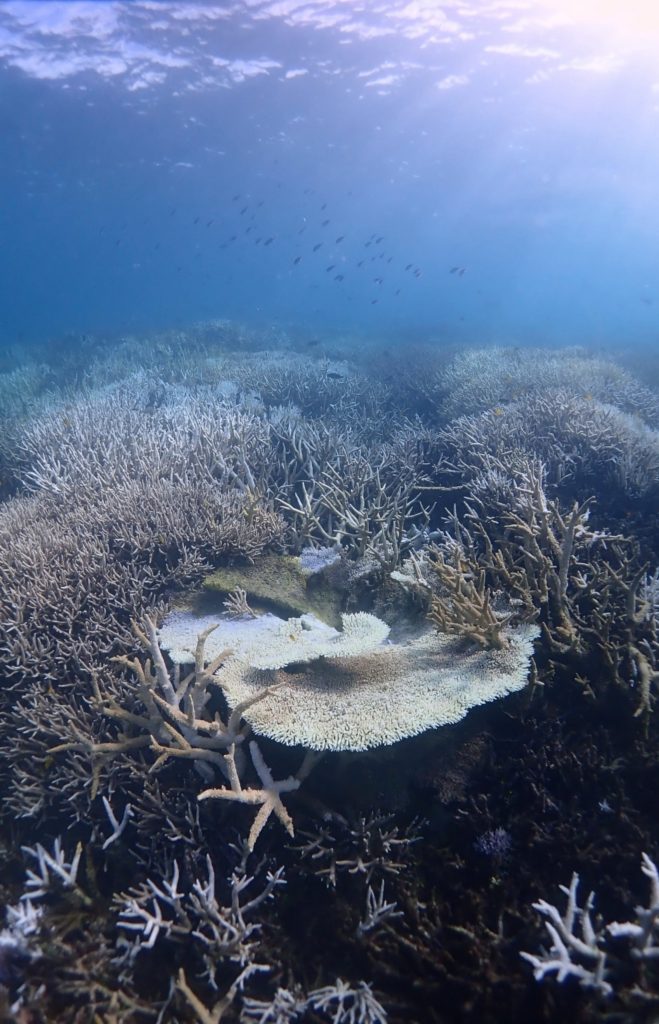 He said a fuller picture would be possible after the final three days of surveying. “They are crucial,” he said.

Working with a staff member from government agency the Great Barrier Reef Marine Park Authority (GBRMPA), Hughes has assessed bleaching levels on 682 reefs from a spotter plane flying at about 500 feet.

Global heating caused by escalating atmospheric greenhouse gases is a major threat to the world’s coral reef ecosystems. The UN’s Intergovernmental Panel on Climate Change found the published evidence suggested a majority of tropical coral reefs would disappear even if heating was limited to 1.5C and would be “at very high risk” at 1.2C. The globe has warmed about 1C since the industrial revolution.

Not all bleached corals die. Corals bleach when they sit in waters that are unusually hot for too long. They can recover if temperatures fall, but are often killed when high temperatures are sustained.

Hughes said the first four days of aerial surveys last week covered almost 500 reefs from the Torres Strait to Cairns. They revealed a mixed picture, with some severe bleaching on reefs closer to shore, but outer “ribbon reefs” in the far north escaping damage.

He said surveys this week in the central parts of the reef had found extensive bleaching at levels “comparable to 2017”, when it is estimated about 22% of shallow water coral along the reef’s 2300km died.

Hughes said about 80 reefs between Tully and Townsville were badly bleached. Both inner and outer reefs were hit. “We could see that some of those corals were big enough that they must have survived the 2017 bleaching and now they re-bleached,” he said.

In more positive news, he said popular tourist spots between Cairns and the Whitsunday Islands had not been badly affected and would likely recover from mild bleaching. But some juvenile corals “about the size of dinner plates” had bleached in the central part of the reef, which he said would affect the pace at which the area recovered from previous bleaching events.

Hughes said he was worried about corals in areas yet to be surveyed in the south. Those reefs had higher proportions of corals that were more susceptible to bleaching. “If they do bleach severely, we will see significant losses,” he said.

In 2016 and 2017, there was no severe bleaching south of Hydrographers Passage, a natural shipping channel north-east of Mackay. Hughes said by late Tuesday they had surveyed about 10 reefs south of the passage and found all were severely bleached.

Further south, at Heron Island, near Gladstone, researchers from the University of New South Wales have been monitoring bleaching since January. Associate Prof Tracey Ainsworth, from the centre for marine science and innovation, said shallow reefs around the island had “really suffered” after being left untouched in 2016 and 2017. 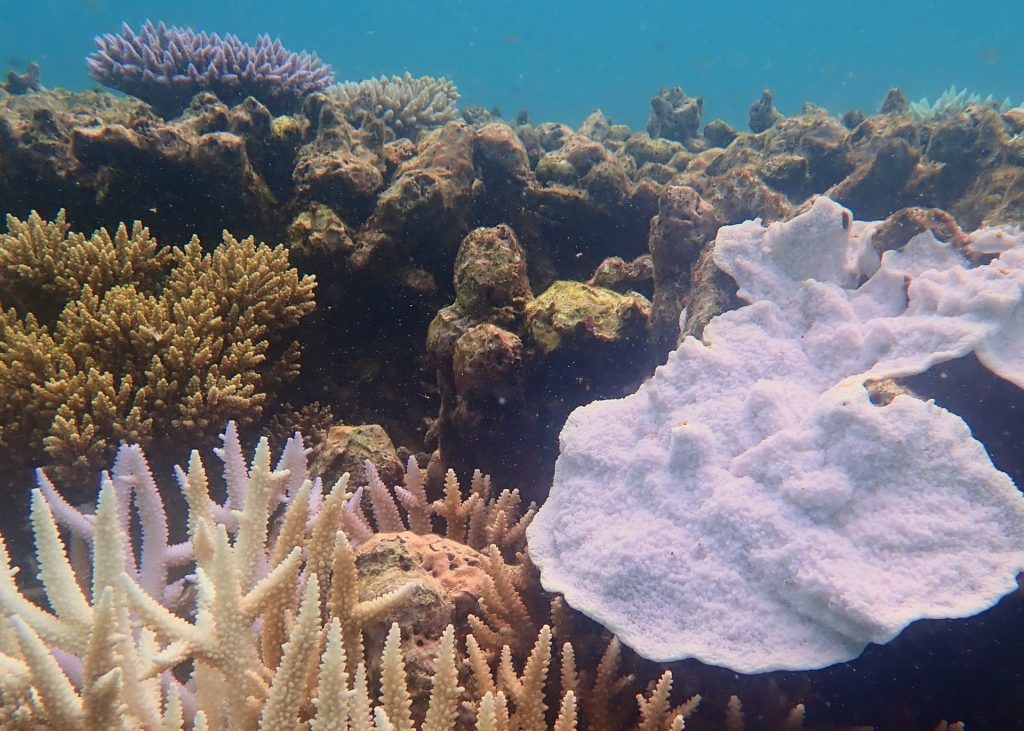 While they were spared in 2016 and 2017, it is not the first time the reefs at Heron Island have bleached. They were significantly affected during localised bleaching in 2011.

“This is the year that the southern Great Barrier Reef has taken a bit of a hit,” she said.

Ainsworth said reefs in deeper water had been less affected, but there had been near 100% impact in shallow lagoon areas that were exposed, or close to exposed, at low tide.

“Pretty much everything [in the shallows] is bleached. There wasn’t a lot of difference between the species and there is quite a lot of mortality,” she said.

While they were spared in 2016 and 2017, it is not the first time the reefs at Heron Island have bleached. They were significantly affected during localised bleaching in 2011. “I’ve been working on these shallows of nearly 20 years so it’s a real shame to see this coral bleaching… but it has been a relief to see it hasn’t affected all of the reef,” Ainsworth said.

Hughes’ surveying team was preparing on Wednesday to fly from Mackay to observe about 200 reefs that make up the Swain and Pompey reef groups. On Thursday, they will fly over the Capricorn Bunker Group that includes the Heron Island research station. They will return to Mackay on Friday, taking a track farther offshore. 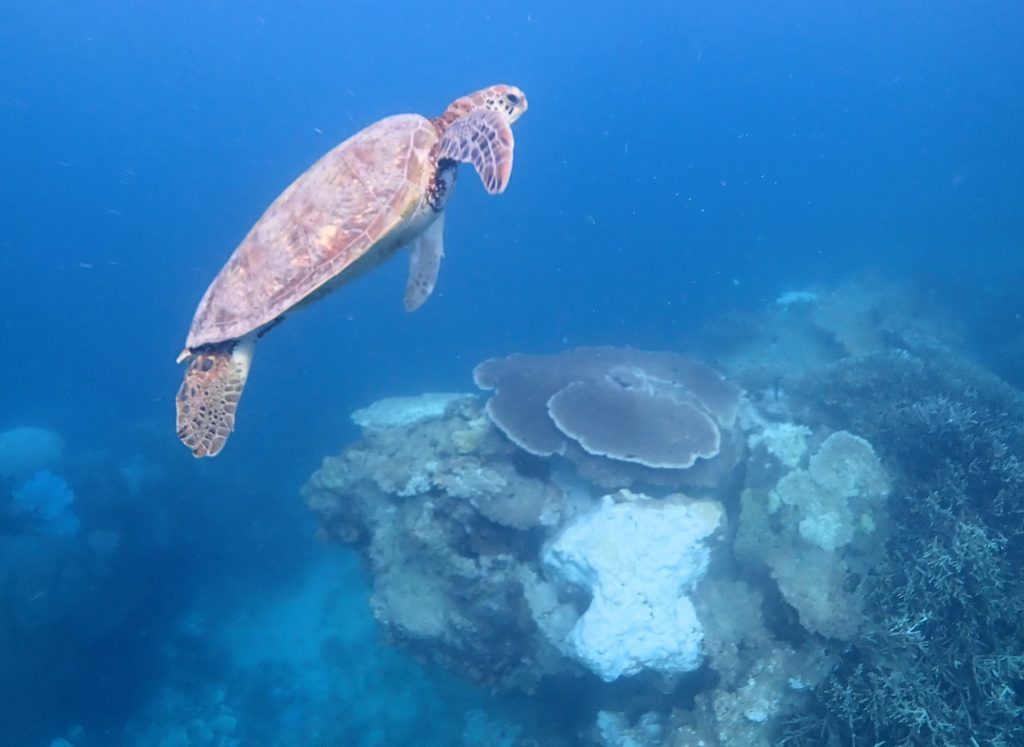 A turtle swims past an area of coral which is bleached.

Richard Leck, head of oceans at environment group WWF Australia, said the bleaching had hit Heron Island and surrounding areas when they had been “looking the best they had in decades”. “It’s really worrying,” he said.

Leck said the GBRMPA had said limiting warming to 1.5C was the only hope for a safe outcome for the reef, but the federal government’s climate targets were consistent with double that. “We need a target for 1.5C and a realistic plan to get there,” he said.

A five-yearly report by the major marine park authority last year found the reef’s outlook had deteriorated from poor to very poor, and warned the window of opportunity to improve its future was “now”.

It comes during an ongoing debate over how countries should manage the impact of the climate crisis on world heritage sites. It is unclear what the coronavirus pandemic will mean for Unesco’s meetings.