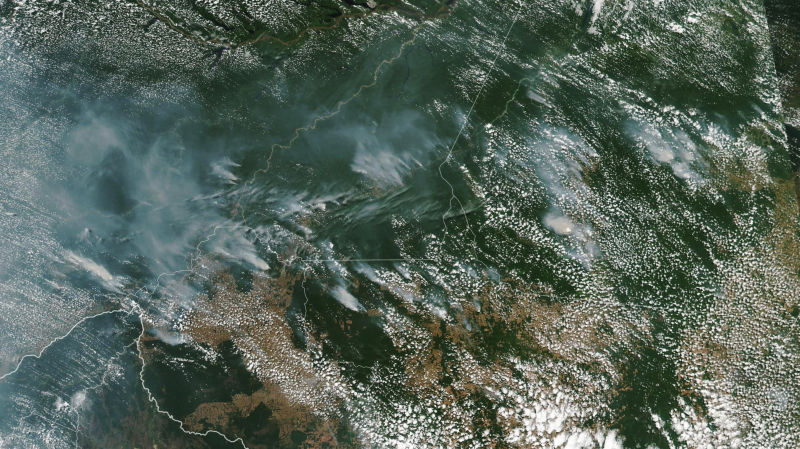 What began as a “day of fire” a week and a half ago has now turned daytime skies in São Paulo an inky black. The Amazon has been in deep, deep trouble ever since far-right president Jair Bolsnaro took over running Brazil. Advocates feared his regime would commit ecological “genocide” in the Amazon and with each passing month, those fears are becoming reality.

Deforestation rates have spiked in recent months, and now large swaths of the world’s largest rainforest have exploded in flames set by human activities. The fires could accelerate the decline of the Amazon and its ability to foster biodiversity and store carbon.

The Amazon has seen 71,497 fires ignited since January, according to data from Brazil’s National Institute for Space Research (more commonly known by its Portuguese acronym, INPE). That’s an 82 percent increase compared to last year and well above 2016’s extreme count of 66,622 blazes.

The Brazilian state of Pará saw a huge burst of fire activity last week after farmers called for a “day of fire” on August 10, according to Brazilian paper Folha de S. Paolo. INPE spotted hundreds of fires across the state as farmers lit up rainforest, a practice often used to clear land to put in mono crops like soybeans or open land for pastures and cattle farming. The fires have also sent carbon dioxide emissions spiraling well above normal, according to data from the European Union’s Copernicus Atmosphere Monitoring Service.

“The recent increase of the deforestation combined with fires could exponentially affect Amazonia by liberating CO2 and other greenhouse gases,” Vitor Gomes, an environmental scientist at the Federal University of Pará in Brazil, told Earther.

Those fires, along with others in the state of Amazonas to the northwest, have continued burning for the past 10 days, unleashing a massive plume of smoke. Prevailing winds on Monday and Tuesday took that smoke and transported it nearly 2,000 miles to southeast. That blackened São Paulo skies on Monday, creating eerie scenes like darkened streets and cars driving with headlights in mid-afternoon.

🌎Just a little alert to the world: the sky randomly turned dark today in São Paulo, and meteorologists believe it’s smoke from the fires burning *thousands* of kilometers away, in Rondônia or Paraguay. Imagine how much has to be burning to create that much smoke(!). SOS🌎 pic.twitter.com/P1DrCzQO6x

The vibe is reminiscent of last year, when smoke from wildfires did the exact same thing in British Columbia. But in some ways, the Brazilian situation is more ominous. After all, the fires in British Columbia weren’t inspired by a fascist president looking to open the forest up for business.

Brazil’s blazes are a whole other story. Bolsonaro ran on a campaign platform that was pro-big business, anti-LGBTQ, and straight up racist. He promised to open the Amazon to mining, fossil fuel exploitation, timber, and agriculture while kicking indigenous groups off their land. From the moment he took office in January, he has done just that.

The result led to an acceleration in deforestation. In July, a soccer pitch-sized hunk of rainforest disappeared every three minutes. The fires this month could drive deforestation rates even higher still. The wanton destruction has led Germany and Norway to pull money out of the Amazon Fund, a program for sustainability-related projects in the Amazon that was designed as an incentive to cut down on deforestation. That could, ironically, lead to even more deforestation.

“As humans cut down more forests, what you see is forest fragmentation,” Jacquelyn Shuman, a scientist with the National Center for Atmospheric Research’s terrestrial research section, told Earther. “You have more edges of forest. In a forest that’s broken up where you have pasture or cleared land, it’ll have more edges exposed to drier conditions. When you have these dry edges, the forest at that edge is more susceptible to fire.”

As trees disappear, Shuman noted, the unique properties that make a rainforest, well, a rainforest could change as well. Evapotranspiration from trees in the Amazon helps feed the clouds that then dump downpours over the forest. As more open land pops up, Shuman said that “forest-cloud cycle is broken.”

The double-edged deforestation disruption comes at a time when climate change is also ratcheting up the pressure on the Amazon. The rainforest is key to combatting climate change, sucking up 2.4 billion metric tons of carbon dioxide annually or a quarter of all carbon absorbed by forests globally. Yet climate change has contributed to drying the region out, weakening the so-called lungs of our planet. Fires like the ones currently burning can even cause parts of the forest to become a net emitter of carbon dioxide as all those decades of stored carbon goes up in smoke, creating a nasty feedback loop.

Eventually, rising temperatures and drought coupled with deforestation could permanently alter one of the world’s most iconic ecosystems, effectively cleaving the Amazon in two. It’s not like the damage can be easily undone. Once the Amazon is gone, it’s gone. And the remaining fractured forest wouldn’t have anywhere near the carbon sequestering capacities of its former self, meaning climate change could accelerate there and the rest of the planet.

Under the Bolsonaro administration, the rise in deforestation is sending the Amazon careening toward a very dangerous place not just for the forest but for the planet as a whole. It might not be at a tipping point, but that’s hardly any consolation.

“We should be worried in finding that out, because probably there will be no turning back after we cross a tipping point,” Gomes said.