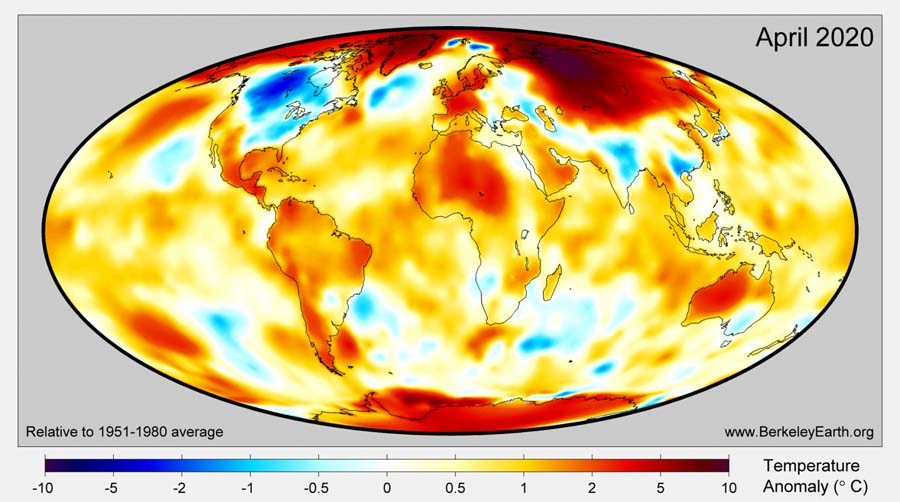 April 2020 is estimated to have been the warmest April since records began in 1850, exceeding the previously warmest year in 2016. Credit: BerkeleyEarth.org

Earth at 10°C above pre-industrial is unimaginable. It’s a deadly horrifying thought, but as shall be explained herein, it should not be dismissed out of hand.

The following story might be labeled as reckless, and it might be criticized as a fearmongering piece of journalism and probably will be. Nevertheless, “10C Above Baseline” explores a dystopian world envisioned by John Doyle, Sustainable Development Policy Coordinator of the European Commission in Brussels.

Doyle’s thesis of a 10C world, within current lifetimes, is based upon sober-minded analysis. Of course, it envisions a planet of few or maybe no humans. Granted, it is hard to believe, very hard to accept.

The Paris Agreement of 2015 officially set goals amongst the nations of the world to employ mitigation measures to hold global temperatures to 2C but preferably 1.5C above pre-industrial, which is mid 18th century (1750s); however, the IPCC has been using measurements that are markedly different from the 18th century pre-industrial baseline: ”The baseline period from which climate change is expressed has also moved on (a common baseline period of 1986–2005 is used throughout, consistent with the 2006 start-point for the RCP scenario).” (Source: AR5 Fifth Assessment of the Intergovernmental Panel on Climate Change) Hmm!

Meanwhile, 1.5C has become a cause célèbre among climate activists.  But, there’s a rub: In order to stay below 1.5C, greenhouse gas emissions, like CO2, need to fall off a cliff, decreasing by 15% per year, starting in year 2020. (Doyle)

Categorically, that’s impossible to achieve for a host of reasons.

Not so long ago the Intergovernmental Panel on Climate Change (IPCC) released a special report about 2C versus 1.5C. Its findings were grim, namely: At 2˚C (3.6˚F) rather than at 1.5˚C (2.7˚F) the danger to ecosystems increases several-fold.

As things stand, the world has a comfort zone of 1.5C to 2.0C with 1.5C the clear preference. But still, at 2.0C all kinds of bells and whistles go off, e.g., (1) severe heat events increase by 2.6xs, (2) the Wet Bulb Temperature WBT-impact increases significantly, (3) 2xs the loss of vertebrate species, and (4) 90% of coral reefs are gone for good, etc., etc., etc., as key ecosystems that support and originate life suffer.

Keeping in mind (lest you forget) there is no Planet B.

John Doyle, Sustainable Development Policy Coordinator of the European Commission and a climate resilience analyst, has studied the climate system and discussed findings at a UN Aid Agencies meeting. He is working on mainstreaming sustainable Development in the Information Society Directorate General with special emphasis on business partnerships to address energy and climate security.

A synopsis of Doyle’s disturbing analysis and speech follows herein:

Doyle: “Roughly speaking, you’ve been told that we may be heading for 1.5c or 2c degrees above pre-industrial temperature. That’s not true. That’s basically very old science, and it’s essentially inaccurate. There isn’t a single independent scientist of the world that would support that position now. We’re actually heading for 10 degrees warming that could happen within 20 to 30 years. And, on the way to 10 degrees, we pass 4 degrees. Now, four degrees is interesting because that’s extinction for our species. So keep that one in mind. I’m not just making this up.”

All of which prompts a question: Along the way to 10C, when does 4C happen? If 10C is on the docket within 20-30 years, as explained by Doyle, then it’s probably safe to assume 4C within 8-15 years. Regrettably, that’s within the lifetimes of pretty much the entire world population now approaching 8B. Talk about impact!

Predicting a 10C uplift in global temperatures beyond pre-industrial is a stunning proposition, absolutely stunning! Indeed, his speech is a death-defying prognostication, but truth be told, nobody will believe it!

A review of literature of other climate scientists adds some dimension to Doyle’s work, to wit: In December 2019, the Potsdam Institute For Climate Research, one of the world’s premier climate research orgs, caused an international stir with a paper published in Nature: “Climate Tipping Points – Too Risky To Bet Against.”

A very interesting statement is found within the Potsdam paper, as follows: “The Earth system has been unstable across multiple timescales before, under relatively weak forcing caused by changes in Earth’s orbit. Now we are strongly forcing the system, with atmospheric CO2 concentration and global temperature increasing at rates that are an order of magnitude higher than those during the most recent de-glaciation… Atmospheric CO2 is already at levels last seen around four million years ago, in the Pliocene epoch. It is rapidly heading towards levels last seen some 50 million years ago — in the Eocene — when temperatures were up to 14 °C higher than they were in pre-industrial times.”

Here’s more Doyle: “Since the last International Panel on Climate Change Assessment Report AR5 was published… All of this has come to light since then. We’ve realized that we have been living in a fool’s paradise, thinking that nice gentle reductions in greenhouse gas emissions and maybe changing to electric cars should see us over the bump. This is simply not the case.”

Doyle’s outlook darkens, as he declares the geo-engineering concept of sucking CO2 out of the atmosphere nowhere near ready for deployment and likely not possible because of the Second Law of Thermodynamics, which essentially says: “You cannot build a machine to clean up the mess you made making the machine.”

Heaven forbid! People are depending upon geo-engineering to bail us out. What if it doesn’t?

Here’s more Doyle: “In the last 30 years we’ve been able to measure that the total amount of vertebrate life on this planet has collapsed by 99%. And, what’s left, at least from the tiny human being up to the big elephant are found loads of cows, loads of humans, and virtually no wild animals. It’s way worse than that. There are no wild animals. There are no fish. There are no insects. Your microbiome inside your own body is collapsing, at least 20% to 30% down over the last 20 to 30 years… We are not on the verge of the sixth mass extinction; we’re in the middle of it. And very likely to be part of it.”

Additionally, the Wet Bulb Temperature effect received mention: “This gives you the temperatures that living creatures can survive… on the left hand side you can see 42C (107.6F) degrees. Human beings can easily survive well over that. But there’s a catch… The fittest human being on the planet, if he is in a temperature of 36C degrees (96.8F) where there’s 100% relative humidity, he dies in six hours.”

“I (Doyle) was in a city (Brussels) in Europe in August. The temperature was 36C degrees and the relative humidity was 40. It only needed to be one and a half degrees higher and about 20% extra humidity for tens of thousands of people to be dying in the streets.”

Doyle provided additional evidence of the ongoing extinction event. Flying insect populations have crashed by 80% in Europe over the past 40 years. We don’t survive without insects… no questions asked!

But, there is one question: What causes 80% of flying insects to drop dead within a half-lifespan of an average human? Something is horribly wrong!

Solutions? Eliminating fossil fuels in enough time to stem excessive warming will not work for numerous reasons. Not only that, fossil fuels account for approximately 80% of all energy production, and there’s no way that’ll change soon enough to help within the next 10 years.

As an aside to Doyle’s terrifying speech, according to the IEA (International Energy Agency) fossil fuel producers, like the U.S., Russia, UAE, and Saudi Arabia, plan on increasing oil and gas production by 120% by 2030, continuing to emit CO2 of ever-higher levels, bringing on more blanketed heat. China is embarking on mega-mega construction of new coal-burning power plants, and so is India, and Japan recently announced its intention to build 22 new coal-burning plants over the next 5 years, continuing to emit CO2 in ever-larger numbers, bringing on more blanketed heat. All of that in the face of irrefutable evidence of acceleration of climate change well beyond the influence of natural events. Maybe the world really is crazy after all.

According to Doyle: “The only option for “getting out of this mess is to stop pretending that we are going green.” To survive as a species, we must switch to local production and forget globalized growth. It’s over. The economic growth paradigm of neoliberal capitalism is incompatible with human survival, especially for life-supporting ecosystems.

It is worth noting that two respected French climate research organizations reached conclusions somewhat similar to Doyle’s but with much less gusto in their numbers.  National Centre for Meteorological Research (CNRM) and Institute Pierre Simon Laplace Climate Modelling Centre in Paris contend, if CO2 emissions continue  “business as usual,” then temperatures could increase by 7°C by 2100.

Still, it is incomprehensible, not impossible, that temperatures skyrocket 10C over the next 20-30 years. Is Doyle’s assessment realistic? What if it is?

Yet, Doyle’s thesis need not be 100% correct to disrupt and destroy ecosystems and cause panic amongst humankind. If he is 50% correct, large portions of the planet become uninhabitable. That’s just for starters.

And, if Doyle’s daunting analysis is only 25% correct, hard-charging 2C-plus circumstances will change life forever, less agricultural land, higher tidal flooding, and eco migrants by the hundreds of millions roaming countryside in massive waves of human flesh, searching for anything edible.

Indeed, it’s always instructive to look at other viewpoints, for example, the prestigious Met Office Hadley Centre/UK, assuming “business as usual” expects 4C by 2055. That’s more than enough to do the dirty work.

An International Panel on Climate Conference at Oxford University conducted a program entitled “4 Degrees and Beyond” that examined the likelihood of 4C, if “business as usual.” Their conclusion: Half of the planet turns uninhabitable.

All of which highlights a problem. “Business as usual” is thriving!

“Business as usual” has not slowed down one iota in 62 years ever since Mauna Loa Observatory started collecting CO2 data in 1958 Noticeably, it has already accelerated+60% this century.

Maybe Doyle is onto something!