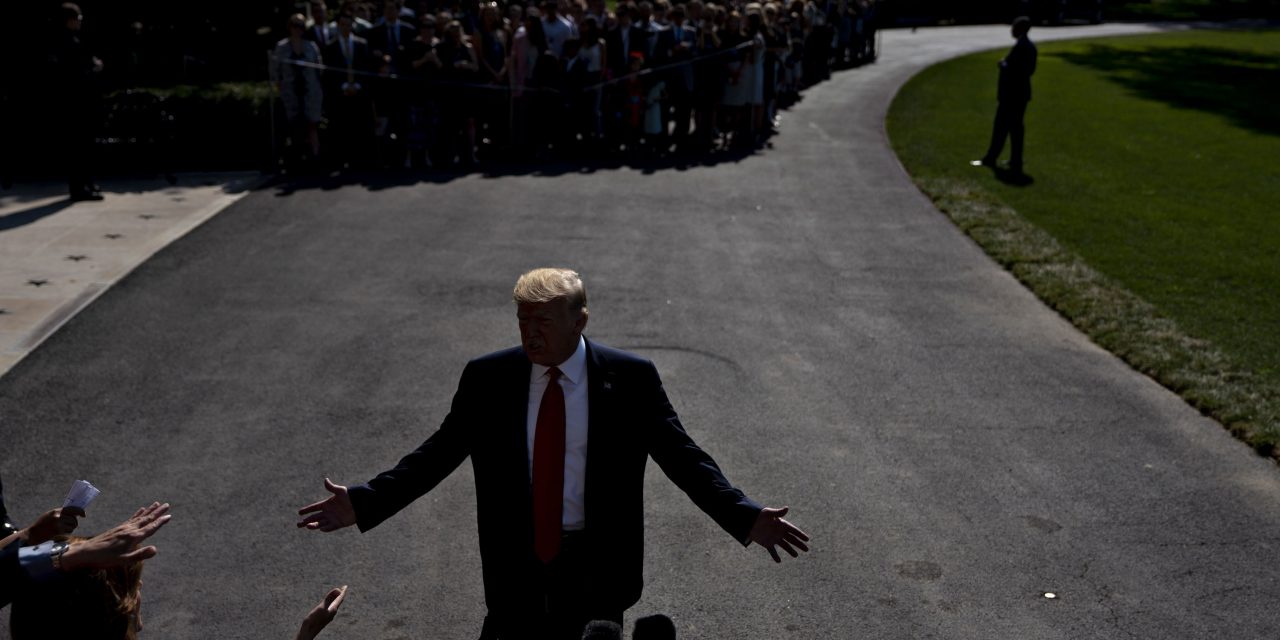 President Donald Trump speaks to members of the media before boarding Marine One on the South Lawn of the White House in Washington, D.C., on Aug. 9, 2019. Photo: Andrew Harrer/Bloomberg/Getty Images

Written by Mehdi Hasan / The Intercept

Forget uranium enrichment: Has Iran mastered time travel?Last month, the Trump White House put out a typically Orwellian statement, chock-filled with lies, distortions, and half-truths about Iran and the 2015 nuclear deal. One line in particular stood out from the rest: “There is little doubt that even before the deal’s existence, Iran was violating its terms.”

strange wording in this new White House statement on Iran. "There is little doubt that even before the deal’s existence, Iran was violating its terms." 🤔 pic.twitter.com/6b8Wizod2p

Is it any surprise that even the foreign minister of Iran took to Twitter to join the online ridiculing of the White House?

The Trump administration’s lies on the topic of Iran are now beyond parody. There is, however, nothing funny about them. U.S. government lies can have deadly consequences: Never forget that hundreds of thousands of innocent Iraqi men, women, and children, not to mention more than 4,400 U.S. military personnel, are dead today because of the sheer volume of falsehoods told by the George W. Bush administration.

So it is incumbent upon journalists to do in 2019 what we collectively did not do in 2003: Check the facts, challenge the lies, debunk the myths.

Here’s my contribution: a refutation of five of the most dishonest and inaccurate claims from the hawks — claims that brought the United States and Iran to the brink of conflict only a few weeks ago.

President Donald Trump has referred to Iran’s “quest for nuclear weapons” and claimed the Islamic Republic will soon be “on the cusp of acquiring the world’s most dangerous weapons.” Israeli Prime Minister Benjamin Netanyahu has argued, “Even after the deal, Iran continued to preserve and expand its nuclear weapons program for future use.”

As long ago as 2007, the U.S. intelligence community produced a National Intelligence Estimate on Iran which offered what then-President George W. Bush would later describe in his memoir as a “stunning” and “eye-popping” conclusion that “tied my hands on the military side”: “We judge with high confidence that in fall 2003, Tehran halted its nuclear weapons program.”

Nothing has changed since then. In January, then-Director of National Intelligence, Trump appointee, and former Republican congressman Dan Coats reaffirmed the consensus view of 16 U.S. intelligence agencies when he told the Senate: “We continue to assess that Iran is not currently undertaking the key nuclear weapons-development activities we judge necessary to produce a nuclear device.”

The president claimed Iran “committed multiple violations.” Hawkish Republican Sen. Tom Cotton accused Tehran of having “repeatedly violated the terms of the deal.” So did Mark Dubowitz, head of the neoconservative Foundation for the Defense of Democracies, who said, “Iran is incrementally violating the deal.”

In fact, the U.N.’s nuclear watchdog, the International Atomic Energy Agency, published more than a dozen reports confirming that Iran was fully complying with the terms of the deal. In April 2018, then-Defense Secretary James Mattis described the nuclear agreement as “pretty robust.” Even the then-head of the Israeli military, Gen. Gadi Eisenkot, said in March 2018 that the deal “with all its faults” was “working.”

Last month, Iran’s foreign minister, Javad Zarif, announced that the country’s stockpiles of enriched low-grade uranium would exceed the 300-kilogram limit laid out in the nuclear agreement — provoking a flurry of condemnations from Western governments and op-ed columnists. But let’s be clear about the order of events: The Iranian violation of one particular aspect of the deal came more than a year after the United States violated the entire deal.

Lie #3: Iran Is the Leading State Sponsor of Terror

“Iran remained the world’s leading state sponsor of terrorism,” declaredthe State Department in September 2018. The Islamic Republic has been “the world’s central banker of international terrorism since 1979,” claimed national security adviser John Bolton a few weeks later. In June, Trump called Iran the “number one terrorist nation” in the world.

This makes no sense. Few would dispute the fact that Tehran has provided support, funds, and weaponry to Hamas and Hezbollah, both of which have been designated “Foreign Terrorist Organizations” by the U.S. government (though it is also worth noting that millions of Palestinians and Lebanese see them as resistance groups that are fighting against Israeli occupiers).

Yet the “war on terror” declared by Bush in the wake of the 9/11 attacks has been fought against Sunni jihadist groups such as Al Qaeda, ISIS, and the Shabab — none of which are backed by Shia-majority Iran.

According to the Global Terrorism Index 2018, compiled by the Institute for Economics & Peace, more than half of the deaths caused by terrorists around the world in 2017 were a result of attacks by four groups: ISIS, the Taliban, the Shabab, and Boko Haram. Again, the experts agree that none of these groups are sponsored by Iran.

“Who blew up the World Trade Center?” Trump asked on Fox News during the 2016 election campaign. “It wasn’t the Iraqis, it was Saudi — take a look at Saudi Arabia, open the documents.”

If any nation deserves the dubious distinction of being “the world’s leading state sponsor of terrorism,” it is the Kingdom of Saudi Arabia, not the Islamic Republic of Iran.

By conjuring up a fictitious alliance between Iran and Al Qaeda, the Trump administration has found a novel way of both justifying the “number one terrorist nation” tag and providing legal cover for a future U.S. attack on Tehran.

The president has claimed that Tehran “provides assistance to Al Qaeda.” Secretary of State Mike Pompeo, during his tenure as CIA chief, suggested it is an “open secret” that “there have been relationships” and “there have been times the Iranians have worked alongside Al Qaeda.”

The Bush administration’s attempt to link secular Saddam Hussein with the theocratic fanatics of Al Qaeda sounded preposterous to many of usback in 2002 and 2003. It was a dumb lie. Yet the Trump administration, and its hawkish outriders at the Foundation for the Defense of Democracies, now want us to believe that the sectarian Sunni killers of Al Qaeda have formed an alliance with Iran, a hard-line Shia theocracy.

“I’ve never seen any evidence of active collaboration,” Jason Burke, author of “Al-Qaeda: Casting a Shadow of Terror,” told me in 2017. The relationship between Al Qaeda and Iran is “not one of alliance” but “highly antagonistic,” concluded a report by the Combating Terrorism Center at West Point in 2012.

The Iran-Al Qaeda conspiracy theory is an especially dangerous one. The 2001 Authorization for Use of Military Force, passed by Congress in the wake of 9/11, allows the president to “use all necessary and appropriate force against those nations, organizations, or persons he determines planned, authorized, committed, or aided the terrorist attacks that occurred on September 11, 2001, or harbored such organizations or persons.” As Democratic Sen. Tim Kaine told the New York Times in June, Trump administration officials “are looking to bootstrap an argument to allow the president to do what he likes without coming to Congress, and they feel the 2001 authorization will allow them to go to war with Iran.”

This is perhaps the dumbest lie of all. Trump has threatened “the official end of Iran.” His pal in the Senate, Tom Cotton, has predicted that the United States could win a war with Tehran with just two strikes: “The first strike and the last strike.”

To call such statements absurd would be an understatement. Iran isn’t Iraq. As Col. Larry Wilkerson, former chief of staff to Colin Powell, told me on a recent episode of my podcast, Deconstructed, a conflict with the Islamic Republic “would be horrible”:

Four times almost the size of Iraq, 80 million, not 26 million people, homogeneity to the population that Iraq certainly didn’t have, 51 percent Persian. Terrain … that’s just inhospitable, almost killed Alexander the Great, for example. This would be a vicious, long-term guerrilla campaign waged by the Iranians over 10 or 15 years. And at the end of it, it would look about like Iraq did in 2011. And it would cost $2 trillion and lots of lives and more than anything else, it would require at least a half a million troops.

In other words, it would be a disaster of epic proportions. Let’s be clear: Many of the accusations leveled by Western governments and Western media organizations against Iran — it is a serial violator of human rights; it is complicit in Bashar Assad’s murderous attacks on his own people; it backs Hamas and Hezbollah, it is a promoter of anti-Semitism — are undeniably true. But the five lies that are constantly deployed by politicians and pundits to justify military action against Iran, and even regime change in Tehran, are flat-out false. And if they are not called out, we will soon find ourselves embroiled in another bloody Middle East conflict that will make the war in Iraq look like a walk in the park. 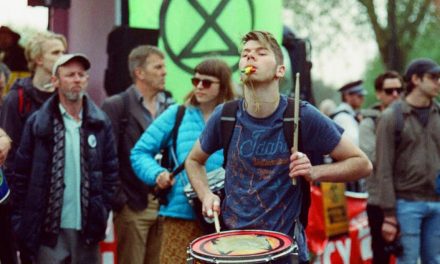 CORONAVIRUS: How Did it Really Start & How Do We Stop it From Happening Again?