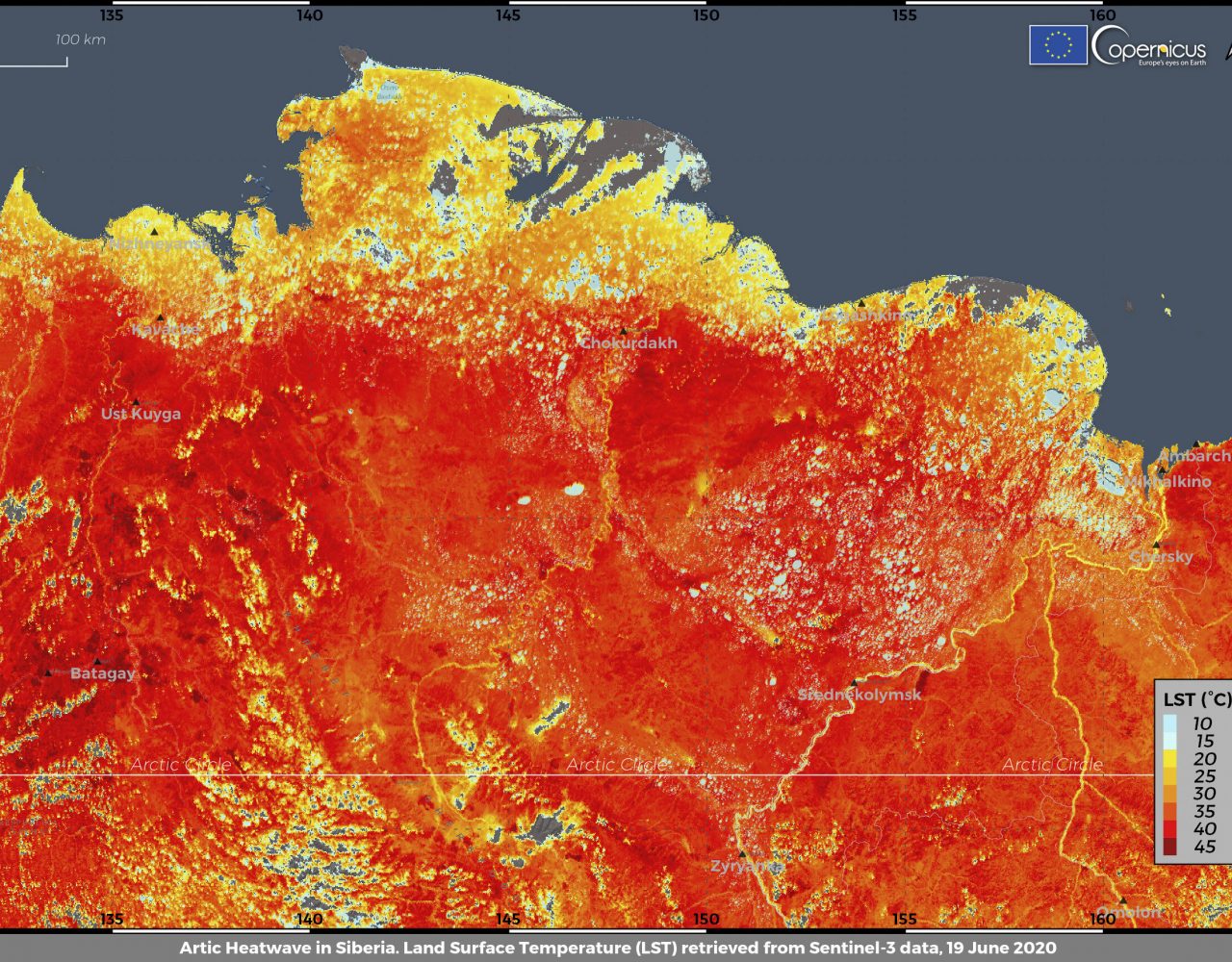 This photo taken on Friday, June 19, 2020 and provided by ECMWF Copernicus Climate Change Service shows the land surface temperature in the Siberia region of Russia. A record-breaking temperature of 38 degrees Celsius (100.4 degrees Fahrenheit) was registered in the Arctic town of Verkhoyansk on Saturday, June 20 in a prolonged heatwave that has alarmed scientists around the world. (ECMWF Copernicus Climate Change Service via AP)

It’s no surprise that first prize, or the blue ribbon, for exceeding 2°C above baseline goes to the Arctic with permafrost that covers 25% of the Northern Hemisphere. Recognition is long overdue, as it’s been totally neglected far too long by the Intergovernmental Panel on Climate Change (IPCC).

This crucial nugget of knowledge comes by way of a recent virtual science session (1:27 in length) sponsored by the National Academy of Sciences and can be watched in its entirety on YouTube at: https://www.youtube.com/watch?v=4nGECF2qSO4

The timing couldn’t be better. The Arctic Circle has been very newsworthy. As such, people must be wondering what to make of the disturbing news that’s unsettling, to an extreme.

According to Euronews, as of July 14th:

“The extreme north and beyond the Arctic Circle has this year registered record temperatures. On June 20, the meteorological service of Russia recorded a peak of 38°C in Verkhoyansk, the highest recorded temperature since records began in the late nineteenth century.”

“This is contributing to the rapid melting of permafrost, the region’s frozen ground, on which are built many industrial construction sites and buildings, many for mining hydrocarbons,” Ibid.

“The melting of the poles that act as temperature controls for atmospheric currents has consequences for the entire climate,” Ibid.

According to Professor Holdren: “Temperatures across the Arctic are increasing 2 to 3 times faster than the global average… The Arctic will continue to be the leading edge of climate change.”

According to Dr. Natali, the Arctic temperature anomaly is already 2°C warmer than the long-term average. The consequences include sea ice loss, melting of Greenland ice sheets, and permafrost thaw.

Permafrost thaw is monitored by boreholes drilled at depths of 20 meters (66 feet) throughout the Arctic. Thus, measured temperature changes avoid seasonal dynamics. These deep permafrost temperatures, in some instances, have been measured for up to 40 years. Results: Permafrost temps are markedly warming across the board, regardless of season.

Of note, Northern Hemisphere permafrost contains 1100-1500 billion tonnes of carbon in the form of ancient organic matter. For comparison purposes, this is twice the amount of carbon already in the atmosphere, and it is three times as much carbon as in the world’s forest biomass.

An obvious implication of Dr. Natali’s statements is humanity is playing with fire in a very big way by allowing anthropogenic greenhouse gas emissions (cars, planes, and trains, etc.) to run wild, increasing by the month, by the year, by the decade with absolutely no end in sight, none whatsoever. At some point in time, all of those billions of tonnes of carbon stored in frozen permafrost will start breaking loose beyond normal background rates and humanity will find its goose cooked, maybe well done.

According to Natali, permafrost carbon emissions are not included in the IPCC’s global carbon budget that targets 2°C or below, preferably below 1.5°C. Well, maybe a suddenly overheated Arctic will bring on an eventual recalculation of how the IPCC looks at and calculates the carbon budget. Better late than never.

And, here’s the distressing part (one of many): Fieldwork by scientists proved that permafrost is already a “net emitter of CO2,” this after thousands of years as a “carbon sink,” but no longer! As such, thousands of years of one of the largest carbon sinks on Earth erased by recklessness of human-generated over-heating ecosystems.

Not only that, according to Natali, permafrost thaw alone is equivalent to ~25% of the IPCC’s allowable emissions to stay below 1.5°C. Yet, the IPCC does not include permafrost in its carbon budget, meaning there’s a very nasty surprise down the line for the rah-rah climate mitigation crowd.

Dr. Anthony has done fieldwork throughout Russia with a lot of work in Siberia (a hothouse nowadays). Her research focuses on thermokarst, lake formation, and greenhouse gas methane.

Per Dr. Anthony, current climate models in the world do not include carbon emissions from thermokarst lakes. Yet, they’re plentiful with millions of thermokarst lakes expanding and releasing methane all across the Arctic.

Not only that but permafrost soils contain 1500 gigatons of carbon, which according to Dr. Anthony, equates to 150 years of fossil fuel emissions under present conditions. Imagine turning loose a sizeable fraction of that carbon. Once again, nation/states’ carbon emission mitigation plans are dead certain to come up real short of professed goals.

Field tests on thermokarst lakes are conducted by lowering a bubble trap into the water to trap microbial methane seeps as the methane bubbles year-round. Bubble traps exist in over 300 lakes throughout the Arctic.

It was 14,000 years ago, as the climate warmed, when permafrost thermokarst lakes flared up on the landscape, bringing 4°C warming over a period of 8,000 years. Nowadays, according to Dr. Anthony, a similar 4°C warming will likely occur over only 80 years in sharp contrast to 8,000 years in the paleoclimate record. Obviously, without her stating as such, it implies a climate system that’s on turbo charger training-wheels, real big ones.

“We are standing at the threshold of abrupt change in permafrost carbon emissions.” (Anthony)

Mercy! And, all of those mitigation plans by 195 nations, but did they ever really get off the ground? The truth is emissions relentlessly climb upwards, ad nauseam. Thus, questioning who’s seriously watching the store?

John Holdren wrapped up the virtual session: We’re probably looking at 80 to 100 gigatons of carbon released from permafrost over this century. In turn, this takes a big bite out of the global carbon budget. According to Dr. Holdren, that prospect is in addition to a global temperature increase, to date, of 1.1°C to 1.2°C above baseline.

Permafrost, which is not included in the global carbon budget by the IPCC, could add 25% to 40%. That’s an enormous problem that lends itself to big trouble down the line. What’s a nation in the throes of carbon emission mitigation plans to do?

Nevertheless, Dr. Holdren, who co-chaired Obama’s President’s Council of Advisors on Science and Technology, says it is still possible to mitigate enough to hold temps to 2°C. But at a cost of ~3% of world GDP. Ahem! He further nearly apologetically suggested that the hit to civilization for failure to mitigate would far exceed that cost, which happens to be 3% of $85T or a whopping $2.55T (that’s trillions). Hello, anybody still out there?

Meanwhile, after years of handwringing and gushing teardrops of green sympathizers, the world is still 80% dependent upon fossil fuels, a fact revealed by Dr. Holdren at the close of his presentation. That’s very troubling.

That’s the same 80% as 50 years ago and a clear signal of absolute failure by governments around the world and a resounding failure by the IPCC to fully implement/organize/promote its heavenly Paris ’15 plans to save the planet. It’s disgraceful!

As for final questions/thoughts via the virtual webcast:

According to Dr. Anthony: The East Siberian Arctic Sea is a place where “we’ve seen really large numbers of CH4 release.”

The following was not discussed in the webcast: Temperatures were recently 30-34C (86-93F) in the East Siberian Arctic Sea (ESAS) region, which region is equivalent in size to Germany, France, Great Britain, Italy and Japan combined and with 75% of the area in 50-80m shallow waters, allowing quick and easy CH4 release from the subsea permafrost without oxidation. Drilling by other scientists has discovered enormous quantities of frozen methane, and noticeable thinning of the subsea permafrost. Trusted sources that closely follow CH4 emissions in the ESAS region are of the opinion: “It may be out of control.” But, it’s important to note that’s anecdotal information.

Also, disconcertingly, the heaviest season for methane release into the atmosphere has only just begun.

Making matters even worse, at the Top of the World, Arctic Ocean sea surface temperatures, which this time of year are typically 0.3°C (32°F), were recently 12°C (54°F). That’s downright spooky!