Yes, Australia Has Always Had Bushfires: But 2019 Is Like Nothing We’ve Seen Before 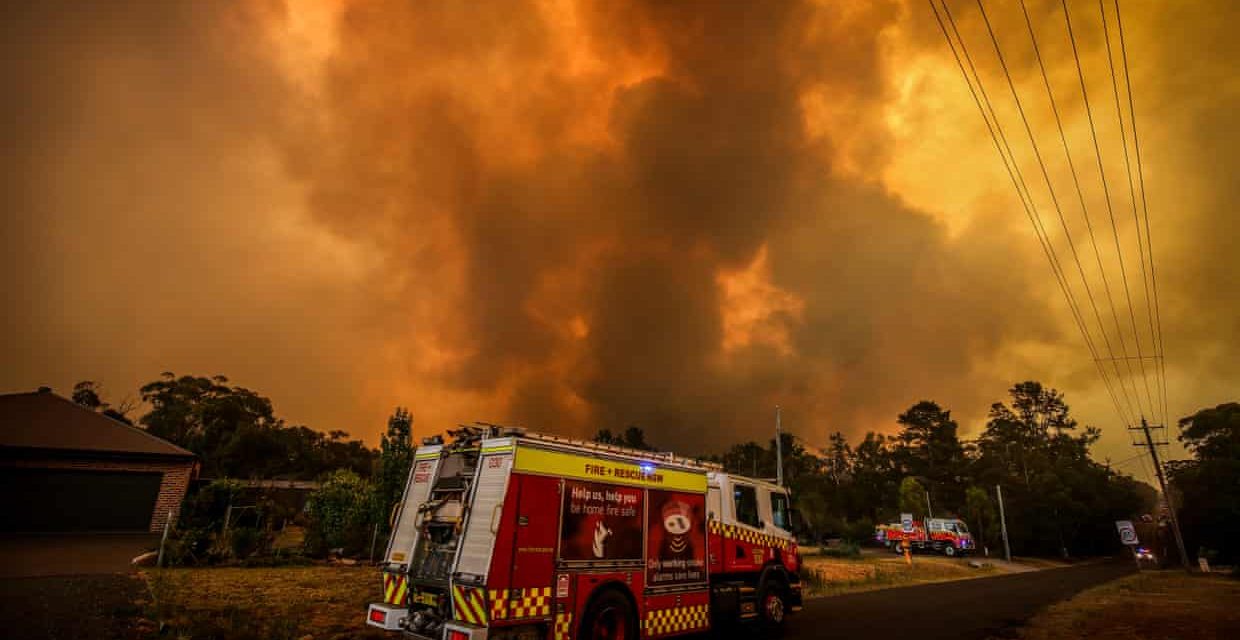 Scientists say the lack of moisture in the landscape is a key reason this year’s bushfire have been so severe and the climate crisis is behind the lengthening of the fire season. Photograph: David Gray/Getty Images

Written by Adam Morton / The Guardian

Record low rainfall has contributed to a continent-scale emergency that has burned through more than 5m hectares and alarmed scientists, doctors and firefighters.

As the area burned across Australia this fire season pushes beyond five million hectares, an area larger than many countries, stories of destruction have become depressingly familiar.

At the time of writing, nine people have been killed. Balmoral, in the New South Wales southern highlands, is the latest community affected in a state where up to 1,000 homes have been destroyed. A third of the vineyard area and dozens of homes were razed in the Adelaide Hills. It is too early for a thorough examination of the impact on wildlife, including the many threatened species in the fires’ path.

Does this qualify as unprecedented? Plenty of experts say yes, but not all politicians and newspaper columnists are convinced. Last week the acting prime minister, Michael McCormack, assured the nation that “we’ve had these smoke hazes before. We’ve had bushfires before.” After returning from Hawaii, Scott Morrison, acknowledged the fires were severe, but also adopted a familiar line: Australia has always had bushfires.

Who says the bushfires are unprecedented?

The firefighting agency in the state worst affected, for starters.

The NSW Rural Fire Service says the scale of what has burned in that state is unprecedented at this point of the fire season. By Monday, 3.41 million hectares had burned. “To put it in perspective, in the past few years we have had a total area burned for the whole season of about 280,000 hectares,” RFS spokeswoman Angela Burford said.

A slightly larger area burned across the 1974 calendar year, but those fires were of an entirely different nature: fuelled by above-average rainfall, it burned through mostly remote outback grasslands in the state’s far west.

By comparison, this year’s fires are further east, where people live, and have been fuelled by a vast bank of dry fuel following the country’s record-breaking drought. Soil moisture is at historic lows in some areas, and rainfall in the first eight months of the year was the lowest on record in the northern tablelands and Queensland’s southern downs.

What do scientists say?

David Bowman, director of The Fire Centre at the University of Tasmania, says the most striking thing about this fire season is the continent-scale nature of the threat. The damage in each state is explained here.

“The geographic range, and the fact it is occurring all at once, is what makes it unprecedented,” Bowman says. “There has never been a situation where there has been a fire from southern Queensland, right through NSW, into Gippsland, in the Adelaide Hills, near Perth and on the east coast of Tasmania.”

He says one of the less explored issues, though it has begun to receive some attention in recent days, is the economic impact of having prolonged fires that affect so many Australians.

“You can’t properly run an economy when you get a third to a half of the population affected by smoke, and the media completely focused on fires,” he says. “I’m not quite certain why anybody would want to be claiming fires have been like this before. It’s concerning as it is a barrier to adaptation. To deal with these sort of fires the first step is to acknowledge the scale of the problem.”

Ross Bradstock, from the University of Wollongong’s Centre for Environmental Risk Management of Bushfires, points to the Gospers Mountain fire, which started in a lightning strike north-west of Sydney in late October and has now burned about 500,000 hectares, as evidence of how this season differs from what has come before.

The fire has now combined with others on the NSW Central Coast to create a mega-blaze, but Bradstock says it was almost certainly the largest single ignition-point forest fire recorded in Australia and, for mid-latitude forests, possibly the world. He says it is bigger than any in California and Mediterranean Europe. A large fire in those conditions is usually about 100,000 hectares.

“We can find no evidence of forest fires of that size anywhere,” he says. “You just don’t see fires of this size in these parts of the world because you do not usually get the extreme dryness and unrelenting nature of the weather.”

Two months in, Bradstock says the Gospers Mountain is a monster, “just unimaginably big” and near impossible to contain unless there is substantial rain. 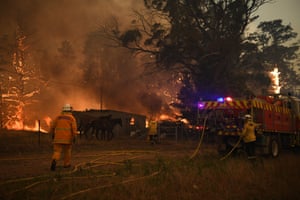 Have the areas destroyed this year burned before?

Some certainly have, but this season has also seen the loss of rainforests, wet eucalypt forests, dried-out swamps and banana plantations that do not usually burn because they are too wet.
Damage to the Gondwana rainforests in 40 reserves between Brisbane and Newcastle prompted the Unesco world heritage centre to last month express their concern to Australian authorities. The reserves include the largest areas of subtropical rainforest on the planet, some warm temperate rainforest and nearly all the world’s Antarctic beech cool temperate rainforest. They are considered a living link to the vegetation that covered the southern supercontinent Gondwana before it broke up about 180m years ago.

There are also fears critically endangered Wollemi pines have burned in the fires tearing through the Blue Mountains. They were thought extinct until discovered by bushwalkers in 1994. Their whereabouts had been kept secret from the public to keep them safe.

Authorities say the smoke that has smothered Sydney, Canberra and other centres and towns in recent weeks has produced pollution up to 11 times greater than the hazardous level for human health. In Sydney, the air pollution has been hazardous for at least 30 days.

NSW’s director of environmental health, Richard Broome, last week told reporters the state was enduring “an unprecedented emergency from a smoke point of view”. “We haven’t seen conditions like this in Sydney, certainly in anyone’s memory that I’ve spoken to,” he said.

Broome said there is early evidence that the number of people turning up at hospital emergency departments needing help is higher than usual. Dr Kate Charlesworth, a fellow of the Royal Australasian College of Physicians, said there was no safe level of air pollution, and that the most vulnerable in the community – babies, children, the elderly and people with pre-existing disease – were the most likely to be affected.

What role does climate change play?

The explanation should be familiar by now: greenhouse gas emissions do not cause bushfires, but they play a demonstrated role in increasing average and particularly extreme temperatures and contribute to the extraordinarily dry conditions afflicting eastern Australia.

Scientists cite the near absolute lack of moisture in the landscape as a key reason the fires have been so severe.

Multiple studies, here and overseas, have found the climate crisis is lengthening the fire season.

In the past, the season started in spring in NSW before moving south to Victoria, South Australia and Tasmania in the new year. Just as Australia’s fire season is more overlapping with that in California, making resource-sharing more difficult, it is also running simultaneously across the country.

Among other issues, that is putting greater strain on volunteer firefighting brigades. It is an issue that firefighters and some experts say the country needs to acknowledge and address. The Morrison government appeared to make an initial, qualified step in this direction on Christmas Eve.