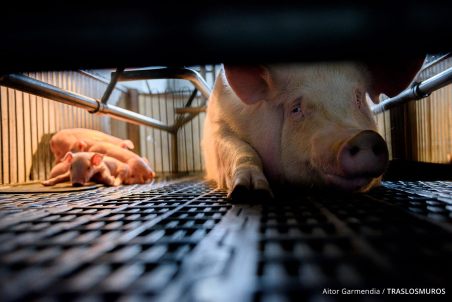 Posted by ‘There’s an Elephant in the Room‘ blog

For a moment, please imagine if you will, that this page were to highlight something horrific being done to humans, something such as torture, sexual violation, or forced labour. Imagine an article describing men, women and children, families and friends torn apart, desperate, degraded, and broken, as they beg and plead for the torment to stop, to be left in peace. What do you think the take-home message would be?

I’m sure that’s simply what any decent person would expect. Here’s another question to consider. Do you think that a day will ever dawn when all humans will have stopped inflicting sickening brutalities on those whom they decide to oppress? For myself, I doubt it. So since brutality may never stop completely, does that have any effect on the message that it needs to stop and stop now? No, of course it doesn’t. Well so far, so good; I trust there’s nothing controversial up to this point?

So picture this; a social media post that summarises these points and attracts ‘likes’, ‘loves’, ‘sad faces’ and ‘angry faces’. Again, what you’d expect. It is also shared a number of times which is excellent – that’s how messages spread and how we provoke thought in our friends and contemporaries. We often add a message of our own when we do this, don’t we? So what do you think we should say in this case?  How about:

You may be thinking by now that this is some kind of sick humour, and I truly wouldn’t blame you. Such comments are so offensive that they make me queasy. Please hold that thought while we shift back to our victims.

The main focus of this page has always been and will always be, Animal Rights. This means that instead of horrors inflicted on humans, it highlights the disgraceful practices that are inflicted on our victims, the myriad activities that constitute our unnecessary exploitation of their lives, their reproduction, their forced labour, and the parts of their violently slaughtered and dismembered corpses. The take-home message on every single post and blog, is always the same; always absolutely uncompromising,

It’s encouraging that these articles are liked and shared, and I often see the sharer add a message of their own – which as I said before, can be brilliant to emphasise the point.

Why is it then, that on the back of a completely uncompromising explanation of why we have no right whatsoever to create victims, do I so often see things like:

When challenged, the response is frequently that the writer of such a message considers that animal use is too entrenched to ever stop, hence their remark.

However. If the wildly offensive messages about human exploitation were not justified by the fact that our species is always likely to cause harm to each other, why on earth would the equivalent in offensive messages be justified when applied to our defenceless victims? The short answer? It’s not. Wrong is wrong, whichever way we slice it. To post an offensive message about other animals when we would be deeply offended by the equivalent if it were applied to humans, is a perfect illustration of our speciesism talking.

Our victims have no one but us to tell the truth about the grave injustice of the ordeal to which we routinely subject them. We owe that truth to them as they queue in the milking parlours and hatcheries and slaughterhouses; and we owe that truth to every single member of our own species. Those who are unable or unwilling to face that truth must live with their own conscience, but we cannot afford to dilute it.

Trillions of lives are depending on this, and the desperate urgency of their plight is being added to each day by the collapsing ecosystems for which our predation is directly responsible. We are running out of time. Tell the truth!