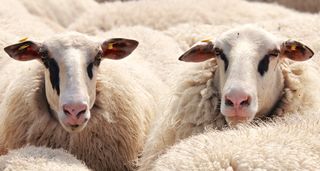 “Our paper is meant to separate fact from fiction and to understand who sheep are–not what we want them to be. In the process we found out that our characterizations of them as dull-minded and lacking uniqueness and independence in their personality and desires is completely wrong. In fact, nothing could be further from the truth.” (Lori Marino and Debra Merskin)

“Sheep do care about their own lives and how they are treated and respond to similar situations in similar ways to humans. Nothing we’ve learned about sheep gives us a free pass to mistreat them based on myths about their “mindlessness.” They are intelligent, complex, and feeling individuals.”

A new and very important essay by researchers Drs. Lori Marino and Debra Merskin called “Intelligence, complexity, and individuality in sheep” that’s available online for free recently crossed my desk. The abstract reads, “Domestic sheep (Ovis aries) are among the earliest animals domesticated for human use. They are consumed worldwide as mutton, hogget, and lamb, kept as wool and milk producers, and used extensively in scientific research. The popular stereotype is that sheep are docile, passive, unintelligent, and timid, but a review of the research on their behavior, affect, cognition, and personality reveals that they are complex, individualistic, and social.” I’ve been very fond of sheep and was pleased that Drs. Marino and Merskin were able to answer a few questions about their landmark essay. Our interview went as follows.

Why did you write “Intelligence, complexity, and individuality in sheep”?

We wrote about sheep intelligence, complexity and individuality because–like all farmed animals–sheep are deliberately misrepresented in ways that make it easier for our species to prey upon them. For example, one of the more prominent stereotypes of sheep is that they are docile, obedient, and possessing little individuality. Hence, we use terms like “lambs to the slaughter” and “follow like sheep.” Our paper is meant to separate fact from fiction and to understand who sheep are–not what we want them to be. In the process we found out that our characterizations of them as dull-minded and lacking uniqueness and independence in their personality and desires is completely wrong. In fact, nothing could be further from the truth.

How does it follow up on your past interests?

This paper is part of a series of papers  written about farmed animals as part of The Someone Project, a joint project between Farm Sanctuary and the Kimmela Center for Animal Advocacy. In these papers we seek to understand who these animals are by delving into the best scientific information available about their cognitive capacities, emotions, personality and social complexity. The ultimate purpose of The Someone Project is to provide valid and thorough information about farmed animals to educate the public about who they are so that they might think more carefully about whether we want to use them in the ways that we/they do. Our papers are meant for scientists as well because we want farmed animals to be viewed as individuals in their own right–along with primates, dogs, cetaceans, and others–with an interesting comparative-evolutionary nature, possessing complex emotions, intricate family lives, and individual interests, and not just studied for how we can more efficiently use them as resources.

In these papers we leave out overly-anthropomorphic views of other animals in favor of objective scientific evidence for complexity, intelligence, and other psychological characteristics. In this way our conclusions fall squarely within the scientific domain and are based on the most rigorous methodologies and conservative interpretations.

As lead scientist for The Someone Project I (Lori) have co-authored peer-reviewed and white papers on pigs, cows, and chickens. This sheep paper is the fourth in that series. Debra brings to this paper an important perspective about how sheep are viewed in popular culture in stark contrast to who they actually are. (See “Seeing Species: A New Book Looks at Animals in Media,” “Pigs are Intelligent, Emotional, and Cognitively Complex,” “Cows: Science Shows They’re Bright and Emotional Individuals,” and “The World According to Intelligent and Emotional Chickens.“)

We are both committed to using language which refers to sheep (and other animals) as a “who” and not a “what” and as beings with minds, psychology, feelings, and life goals. We don’t shy away from using these kinds of terms because they are valid and authentic ways to describe other animals.

What areas did you cover, what are some of your general conclusions, and were any surprising to you?

“Representing farmed animals through language as objects, not subjects, of farming, research, and hide-harvesting practices, serves to distance humans psychologically from other animals.”

We covered cognition, emotions, personality and social behavior, and complexity. All of these are “journeys” into the minds of farmed animals that revealed the fact that all farmed animals possess abilities that are seen in other animals we readily admit are exceedingly intelligent and complex, i.e. primates, dogs, etc. The evidence is right there in the scientific literature and yet many people continue to denigrate this knowledge because it makes them feel uncomfortable when eating a lamb or chicken or wearing the skin of a cow.

Some of the more specific findings from our study that show how sheep are on a par with so many other mammals–including our own species–when it comes to certain cognitive abilities, emotions, and personalities are described below.

For example, there is a wealth of information on how sheep have extremely sophisticated face recognition abilities on a par with humans. They can interpret emotions on the faces of other sheep and can remember sheep faces over years. They can also discriminate human faces, even when those faces are shown to them in different orientations.

Sheep are emotional animals and, like us, can feel optimistic or pessimistic based on their prior experiences. Their emotions carry over into how well they do on cognitive tests. Just like with humans, sheep who have had bad experiences in the past tend to not do as well on cognitive tasks as those who had good experiences.

And speaking to the misconception of sheep as lacking in individuality, studies show that sheep have individual personalities–distinctive combinations of traits that are consistent over time and that map readily onto some of the personality dimensions we recognize in humans., e.g., boldness-shyness. When they behave collectively, as when moving in herd, this is a survival skill designed to protect the group, versus popular beliefs about them lacking common sense. And if you take the time to assess who’s who in the herd you find that its structure is determined by individual sheep and their relationships with other sheep.

Sheep do care about their own lives and how they are treated and respond to similar situations in similar ways to humans. Nothing we’ve learned about sheep gives us a free pass to mistreat them based on myths about their “mindlessness.” They are intelligent, complex, and feeling individuals.

What would you like people to do with your essay and your conclusions?

Truth be told, we would like people to read our paper and awaken  to the realization that sheep are like us in all the ways that matter in terms of how we treat them and that we should not be using them as food and medical research subjects. Furthermore, that there is nothing to fear in this realization, rather, beginning today, right now, every one of us can make a difference in the lives of animals and the future of the planet.

Are you hopeful things will change for sheep and other so-called “food animals” who are routinely and horrifically abused for human meals?

To be honest, we are concerned, as are many scientists, scholars, poets, and artists that the way animals are treated will not change. Recent reports about the speed at which species are lost by the minute on the planet should awaken people to the role they can play in slowing the course of what portends to be an ecological and ethical disaster. However, through these reports and papers it is our hope that consumers will realize that who they eat, wear, and experiment upon is someone, not something.

Thanks, Lori and Debra, for answering these questions, which, of course, raise many more questions not only about who these amazing beings are, but also why they’re routinely treated as if they’re unfeeling dullards. I totally agree with your conclusion, “Our review contradicts historical perceptions of sheep that fuel and sustain contemporary media, popular culture, and farming practices.” I’m glad your essay is available online for free and I hope it will be read by a global audience, many–far too many–of whom don’t appreciate sheep for being intelligent and highly emotional individuals with marked differences in personality who are used and abused by the millions, each and every year. Detailed research shows that sheep matter, as do all other nonhuman animal beings, and we must use what we know on their behalf. They all matter because they are alive.