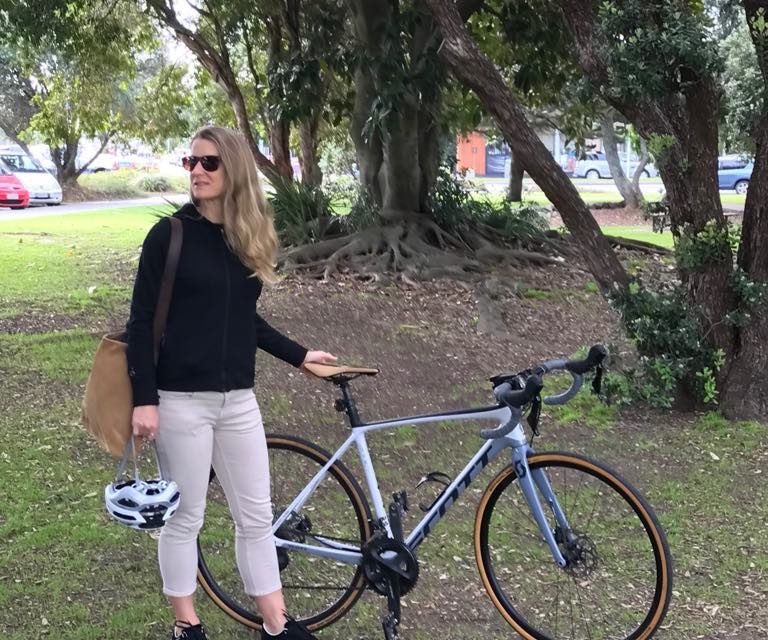 Author Jo Wills and her bike: "Sometimes I accidentally match my outfit to my bike."

I cycle for transport. This is different to cycling for recreation or sport, not better, just different. When I need to go somewhere, my preference is to use my bike. This includes riding to and from the office, work meetings, out with friends, for a coffee, appointments, really anywhere I can, I ride.

This means a few things, one being I’m often sweaty and some might say smelly. I don’t care. One of the many benefits of cycling is even when you’re not intentionally exercising, you’re moving your body, so sweat happens. I don’t always have a place to change my clothes so when I turn up to a meeting with a glow on, I just own it.

Another consequence often on my mind is the more I ride, the more exposed I am. I have friends who compete at an international level in road cycling. They, without question spend considerably more time in the saddle than me and ride on the open roads, which is not without risk. I have some experience of this as I also do a little bit of road cycling for exercise. It’s a different buzz for sure having a logging truck whizz by you at a hundred kilometres per hour.

However, the exposure I experience on a daily basis is on local, congested, city roads full of people in cars in a hurry to get somewhere. Not everyone appreciates a cyclist in their lane, but it seems people are less tolerant of female cyclists.

The Gender Policy Report recently released a study from America about the way men and women cyclists are treated on the road. The results were alarming. They showed women were treated differently and are 3.8 percent more likely to have their space encroached on by drivers than men. This left me speechless. But only for a moment, then I felt anger and exasperation.

Is there no end to the crap women have to put up with?

It got me wondering if I have just been accepting all of the hollering, being squeezed out, tooted at and hand gesturing as a normal part of cycling. Or is this actually a thing? Do women experience worse treatment on the road? The research says it’s real and other women have shared their stories with me.

Lisa Eve, another female ‘cyclist for transport’ told me she experiences this regularly, even to the extent of when she is cycling with her husband Marcus, she cops it. One time, Lisa was cycling and a group of guys took the time to throw oranges at her through the window of their car. Marcus was not more than ten metres in front of her. Lisa just happened to be pregnant at the time.

Then there’s this article printed in the Spinoff, Crash, Cry and Carry On, by Emma McInnes which I found really upsetting. I haven’t had as many crashes as Emma describes but I’ve had many close calls. It upset me that something I love doing so much is attached to such awful experiences when it’s actually an incredibly peaceful, freeing and wholly beneficial activity.

But it’s not only men who behave like this towards female cyclists, women do as well.

While I’m confident it’s only men who holler bizarre obscenities at me as I’m cycling, women drivers often squeeze me out. This means they drift over into the limited space I have on the road, often leaving me nowhere to go. I know women are guilty of this because I eyeball every person who does it to me. 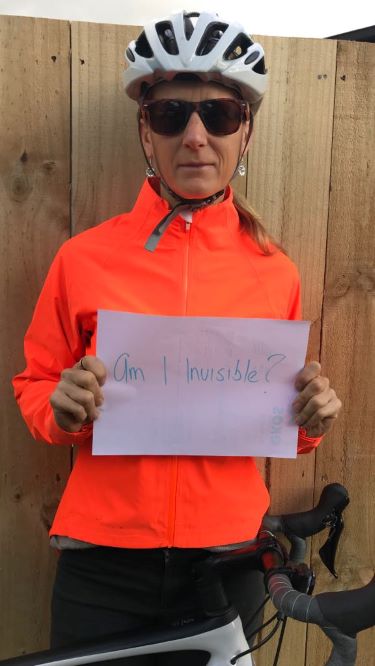 So what’s going on? Why are women cyclists treated differently on the road than men? The research only tells us it’s happening, but without any explanation as to why. Maybe people mistakenly think female cyclists don’t go that fast or need as much space.

Could it be that societal thing where older women start to become invisible? We lose our worth as the greys come in, supposedly. But this can’t be the case for me because more often than not I’m wearing a bright orange jacket. I’m not a huge fan of wearing ‘high vis’ gear while riding (it indicates cycling is a dangerous activity and sends the wrong message), but my partner bought the jacket for me. It’s warm as well as wind and rain proof so I wear it.

There is no way I’m invisible on the road.

This is a common theme in everyone’s stories, though: “My general experience cycling around here is that drivers just Do Not See cyclists” says Lisa.

The same sentiment is shared in the above-mentioned article by Emma. “A car pulled out of the parking lane, and sailed into the lane I was in and into the spot I was on track to be on in seconds, without looking for me.”

I absolutely know male cyclists deal with stuff as well. I’m friends with many and they share their stories with me, some of which are horrific and involve physical assault. Maybe a study should be conducted that looks at how often male and female cyclists are physically attacked by a driver. I’d be sure men get hit more often.

The reality is, whether you’re male or female, on many occasions the driver just won’t see you. Regardless of your gender or the colour of your jacket. This is the root of the problem. A cyclist at the very least deserves to be seen.

Frustratingly though, the New Zealand Road Code makes it the responsibility of the cyclist to be seen, not the driver to see. We cyclists need to be the eyes and ears of all road users.

There is one thing, though, which would make it safer for cyclists. More cyclists on the road. Female, male, young, old, all of us. It’s a safety in numbers thing. So my message to female cyclists is feel the fear and do it anyway. Get out there and ride like the wind. And to the guys who hang out their car windows hollering at me, just don’t.