‘Super Size Me 2’ Exposes the Truth About Fast Food Chicken 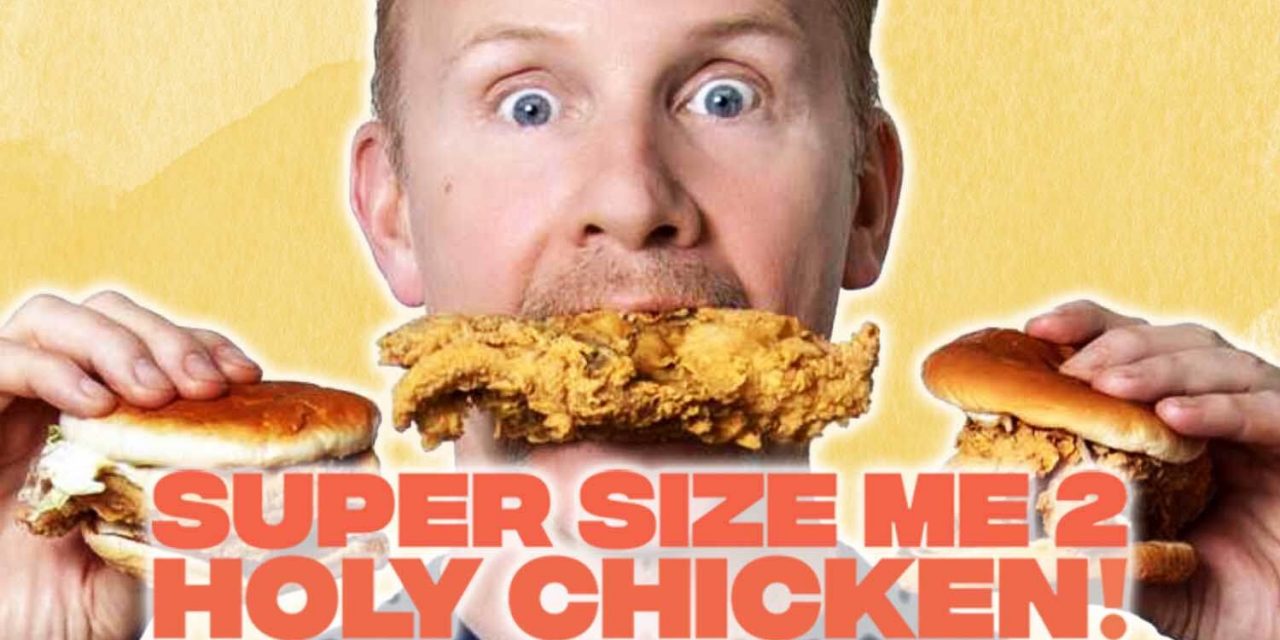 Fifteen years after “Super Size” me, the documentary that exposed how damaging regular fast food consumption is to health, director Morgan Spurlock is taking on chicken farming.

In “Super Size Me 2,” Spurlock explores how companies use marketing to promote “ethical” chicken meat via labels like “free range,” “humanely raised,” “no hormones added,” “100 percent natural,” and “cage-free.” The premise follows Spurlock attempting to open his own chicken chain. “What if there was a company that was completely honest with their customers?” he asks in the trailer.

As he searches for meat sources, Spurlock finds that even when the United States Department of Agriculture (USDA) gives its seal of approval to the aforementioned labels, it’s largely a marketing scheme.

“What’s the smallest space we can give [chickens] that would still be quantified as free range?” Spurlock asks. He sets up a small, caged area outside of a barn housing chickens, allowing them little room to explore the outdoors.

The trailer also shows small snippets of how marketing is being used to give fast-food chicken the perception of being healthier than it is. In one clip, a woman adds fresh green herbs to a sandwich, saying they give “a health halo.” In another clip, a man says the term “fried” has “evolved to crispy.” Artificial grill marks are added to cutlets and pieces of fried chicken in one part of the film.

“Super Size Me 2” originally premiered at the 2017 Toronto International Film Festival, where it earned the runner-up for People’s Choice Award for Documentaries. Following the premiere, YouTube purchased the documentary for $3.5 million for its streaming service, YouTube Red. But after the filmmaker admitted to past sexual misconduct, YouTube dropped the film, followed by the 2018 Sundance Film Festival.

“I am part of the problem. We all are,” Spurlock wrote in the post. “But I am also part of the solution. By recognizing and openly admitting what I’ve done to further this terrible situation, I hope to empower the change within myself. We should all find the courage to admit we’re at fault.”

“I will do better. I will be better. I believe we all can,” he continued. “The only individual I have control over is me.”

“Super Size Me” was nominated for the Academy Award for Best Documentary Feature in 2004 and won Best Documentary Screenplay from the Writer’s Guild of America. In the film, Spurlock orders McDonald’s for breakfast, lunch, and dinner over the course of one month. If he was offered the Super Size option, he had to take it. The then-32-year-old’s cholesterol levels skyrocketed to 230 mg/dL and he experienced mood swings, sexual dysfunction, lethargy, heart palpitations, and fat accumulation in his liver. Six weeks after the film, McDonald’s dropped the super size option.

The filmmakers hope to have the same impact through the sequel. “I think that what the film does a great job of showing is how misleading a lot of [industry green washing] is, how we are continuing to be sold things that take advantage of us, that we are being manipulated as consumers,” Spurlock told Deadline in 2017.

“Super Size Me 2” comes to theaters and digital on September 13.