I was 10 years old when I learned what the word “genocide” meant. It was 2003, and my people were being brutally attacked because of their race — hundreds of thousands murdered, millions displaced, a nation torn apart at the hands of its own government.

My mother and father immediately began speaking out against the crisis. I didn’t really understand it, except for the fact that it was destroying my parents. One day, I walked in on my mother crying, and I asked her why we are burying so many people. I don’t remember the words that she chose to describe genocide to her 10-year-old daughter, but I remember the feeling. We felt completely alone, as if no one could hear us, as if we were essentially invisible.

This is when I wrote my first poem about Darfur. I wrote poetry to convince people to hear and see us, and that’s how I learned the thing that changed me. It’s easy to be seen. I mean, look at me — I’m a young African woman with a scarf around my head, an American accent on my tongue and a story that makes even the most brutal of Monday mornings seem inviting. But it’s hard to convince people that they deserve to be seen. I learned this in my high school classroom one day, when my teacher asked me to give a presentation about Darfur. I was setting up the projector when a classmate of mine said, “Why do you have to talk about this? Can’t you think about us and how it will make us feel?”

My 14-year-old self didn’t know what to say to her, or how to explain the pain that I felt in that moment, and in every moment that we were forced not to talk about “this.” Her words took me back to the days and nights on the ground in Darfur, where we were forced to remain silent; where we didn’t speak over morning tea because the warplanes overhead would swallow any and all noise; back to the days when we were told not only that we don’t deserve to be heard but that we do not have a right to exist. And this is where the magic happened, in that classroom when all the students started taking their seats and I began to speak, despite this renewed feeling that I didn’t deserve to be there, that I didn’t belong there or have a right to break the silence.

As I talked, and my classmates listened, the fear ebbed away. My mind became calm, and I felt safe. It was the sound of our grieving, the feel of their arms around me, the steady walls that held us together. It felt nothing like a vacuum.

I choose poetry because it’s so visceral. When someone is standing in front of you, mind, body and soul, saying “Witness me,” it’s impossible not to become keenly aware of your own humanity. This changed everything for me. It gave me courage. Every day I experience the power of witness, and because of that, I am whole. And so now I ask: Will you witness me?

They hand me the microphone as my shoulders sink under the weight of this stress.

The woman says, “The one millionth refugee just left South Sudan. Can you comment?”

I feel my feet rock back and forth on the heels my mother bought,

Do we stay, or is it safer to choose flight?

My mind echoes the numbers:

And this lump takes over my throat,

as if each of those bodies just found a grave

right here in my esophagus.

all north and south and east and west,

so restless the Nile couldn’t hold us together,

and you ask me to summarize.

They talk about the numbers as if this isn’t still happening,

as if 3,000 aren’t still making their final stand

at the bottom of the Mediterranean,

as if there aren’t entire volumes full of fact sheets about our genocides,

and now they want me to write one.

we never talked over breakfast,

because the warplanes would swallow our voices.

so he died in a war zone.

a burning bush without God is just a fire.

I measure the distance between what I know

and what is safe to say on a microphone.

Do I talk about sorrow? Displacement?

Do I mention the violence,

how it’s never as simple as what you see on TV,

how there are weeks’ worth of fear before the camera is on?

Do I tell her about our bodies,

how they are 60 percent water,

making fuel of our sacrifice?

Do I tell her the men died first, mothers forced to watch the slaughter?

That they came for our children,

scattering them across the continent until our homes sank?

That even castles sink at the bite of the bomb?

Do I talk about the elderly, our heroes,

too weak to run, too expensive to shoot,

how they would march them,

hands raised, rifles at their backs, into the fire?

How their walking sticks kept the flames alive?

It feels too harsh for a bundle of wires and an audience to swallow.

like the valley that filled with the putrid smoke of our deaths.

Is it better in verse?

Can a stanza become a burial shroud?

Will it sting less if I say it softly?

If you don’t see me cry, will you listen better?

Will the pain leave when the microphone does?

Why does every word feel as if I’m saying my last?

Thirty seconds for the sound bite,

and now three minutes for the poem.

My tongue goes dry the same way we died,

becoming ash, having never been coal.

and I realize that I locked my knees, bracing for impact.

I never wear shoes I can’t run in.

So, I wanted to leave on a positive note, because that’s the paradox that this life has been: in the places where I learned to cry the most, I also learned how to smile after. So, here goes.

but my face makes other plans,

focusing energy on this smile, so as not to waste it on pain.

The first thing they took was my sleep,

thinking maybe I missed something,

maybe the cavalry is still coming.

so I bought bigger pillows.

My grandmother could cure anything

by talking the life out of it.

And she said that I could make a thief in a silo laugh in the middle of our raging war.

War makes a broken marriage bed out of sorrow.

You want nothing more than to disappear,

but your heart can’t salvage enough remnants to leave.

joy is the armor we carried across the borders of our broken homeland.

A hasty mix of stories and faces that lasts long after the flavor is gone.

A muscle memory that overcomes even the most bitter of times,

my memory is spotted with days of laughing until I cried,

or crying until I laughed.

Laughter and tears are both involuntary human reactions,

testaments to our capacity for expression.

So allow me to express

that if I make you laugh, it’s usually on purpose.

And if I make you cry, I’ll still think you are beautiful.

This is for my cousin Zeinab,

bedridden on a random afternoon.

I hadn’t seen her since the last time we were in Sudan together,

and there I was at her hospital bedside

in a 400-year-old building in France.

Suddenly, English, Arabic and French were not enough.

and Zeinab said, “Well, get on with it.”

And I read her everything that I could, and we laughed, and we loved it,

and it was the most important stage that I’ve ever stood on,

but still managed to make pearls of this life;

by the ones who taught me to not only laugh,

but to live in the face of death;

who placed their hands across the sky,

measuring the distance to the sun and saying, “Smile; I’m gonna meet you there.”

Zeinab, who taught me love in a place like France,

Zeinab, who wanted to hear poems on her deathbed —

Her heart muscles expanded until they couldn’t function.

And she held me, and she made me feel like gold.

And I said, “Zeinab,

isn’t it strange that your only problem

is that your heart was too big?”

Syndicated from Ted.com. Emtithal “Emi” Mahmoud dedicates her time to spreading understanding through poetry and advocacy, particularly for the cause of refugees and disadvantaged communities the world over.

The Mass Extinction No One Is Talking About 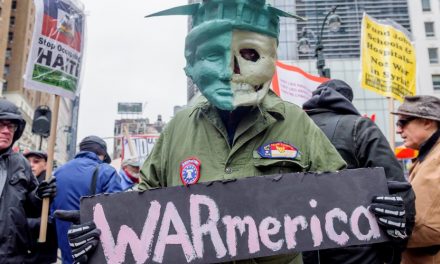