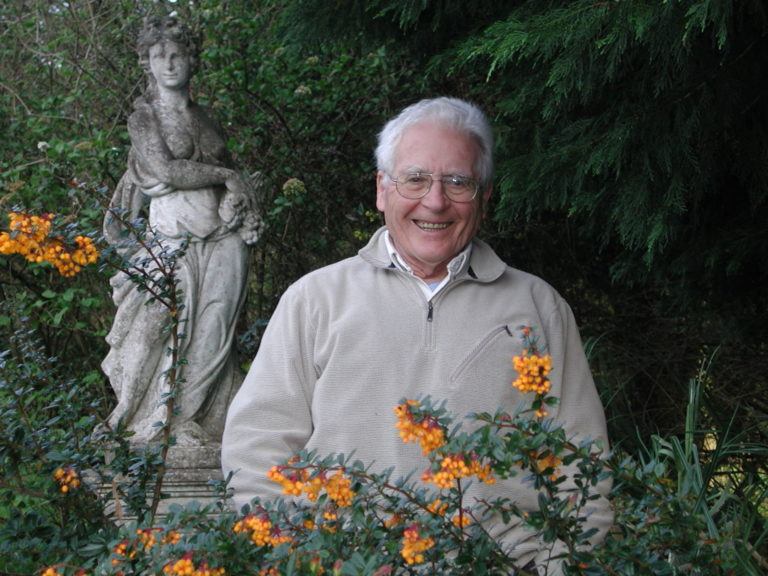 James Lovelock theorized Gaia while working for NASA in the 1960s when he was hired to determine if there was “life on Mars.”

Gaia may be older but James Lovelock, Mr. Gaia himself, turns 100 on his upcoming birthday, July 26th.

For over 50 years, he has been Britain’s leading independent scientist. His independence from a formal relationship with an educational institution or governmental agency gives him a unique perspective. He’s one of the few scientists without an axe to grind, and of great interest, he’s been observing the scene for 100 years. He’s a living treasure trove of scientific knowledge whose reputation, at one point in time, withstood sharp criticism by the scientific community. Today, he’s a proven genius.

His Gaia hypothesis, which contends that the earth is a single, self-regulating organism, is now accepted as a founding principle of most climate science. His theory proposes that the atmosphere, oceans, rocks, soil and all living things constitute a self-regulating system that maintains favorable conditions for life.

To his everlasting credit, he helped save all of humanity by developing an invention for detecting CFCs in the atmosphere that was instrumental in discovering the infamous Ozone Hole of the 1980s.

The ozone molecule (O3), which is randomly scattered throughout the stratosphere at 10-to-20 miles above Earth’s surface, filters-out hazardous effects of ultraviolet radiation from the Sun, without which life would burn up.

After the Ozone Hole was identified, it led to the Montreal Protocol on Substances that Deplete the Ozone Layer in September 1987. Human-made chlorines, CFCs, were prohibited.

Until… Alas, a new alarm was set off in Southeast Asia. The Environmental Investigation Agency in 2018 discovered a source of illegal CFCs coming from provinces in eastern China manufacturing polyurethane insulation. The manufacturers were using CFC-11 because of its better quality and cheaper costs than alternatives.

According to third-party analyses: “This new study is based on spikes in the data on air that comes from China,” lead author Dr. Matt Rigby, the University of Bristol, told BBC Inside Science. “Using computer simulations of the transport of these gases through the atmosphere we can start to put numbers on emissions from different regions and that’s where we come up with this number of around 7,000 tonnes of extra CFC-11 emissions coming out of China compared to before 2012.”

Oh please! Somebody find a bucket… quick, hurry up!

Not only that but CFCs are very potent greenhouse gases. One ton of CFC-11 is equivalent to around 5,000 tons of CO2.

Getting back to a semblance of sanity and the James Lovelock story, one of his most elegant pieces of hard science was discovery of the cycle in which algae in the oceans produces volatile sulphur compounds that act as seeds to form oceanic clouds. Without these dimethyl sulphide seeds, cooling oceanic clouds would be lost.

Lovelock’s gargantuan influence is nearly impossible to describe in one article. It requires a book, not an article. Still, a lot can be gleaned from his voluminous studies, interviews, and analyses, especially regarding the status of Mother Earth.

One of his starkest warnings was that the earth is overpopulated by a factor of seven. Stating: “it cannot for much longer maintain both its ecosystem and the supply of food, energy and materials to such a large population.”

Of course, therein, by implication, he references the Great Acceleration post WWII when world population growth took off like a space ship blasting off. After all, it took thousands of years to reach 2B people by 1945, but it only took one generation to nearly triple, up 275%, to 7.5B people. If anybody has questions about how and why ecosystems throughout the planet are strained, if not outright crumbling apart, then look to the Great Acceleration in harmony with rampant High Capitalism for answers.

With High Capitalism, ecosystems are handled like throw away Dixie Cups. As a result, a gigantic crack is starting to appear in Earth’s crust, running from pole to pole as it comes apart at the seams. Infinite growth is the greatest illusion of all time, that, nevertheless and unfortunately true “turns on” Wall Street and political leaders around the world. But, that formula for “growth to the sky, to infinity,” is not working very well for Gaia, which has already reversed course downwards towards surefire darkness and chaos. Which means that something has to change before all hell breaks lose. The likeliest target for change is current political theory, as the neoliberal brand of capitalistic democracy has gotta go the way of the Dodo Bird, otherwise, the planet will likely suffer serious climate disasters.

There’s a better way: Eco economics treats the economy as a subsystem of Earth’s larger ecosystem and emphasizes natural capital instead of consuming it and destroying it.

During a recent BBC interview, Lovelock said: “There is a real danger of losing our tenure on the planet altogether…. We’ve got to care about this matter of global warming because if we don’t do anything about it, there won’t be anybody here… It’s about time we went back to taking an interest in the environment… What happens to the planet when more CO2 is put into the air? The earth will get hotter. It will heat up to a point where no life on it of our kind will be possible…” (BBC Ideas interview of James Lovelock d/d February 8th2019)

In an earlier interview with Nature Video, regarding his book The Vanishing Face of Gaia, A Final Warning (Publ. Allen Lane), he outlined expectations for global warming: After informing the interviewer that he preferred to use “global heating” rather than “global warming,” he outlined consequences: “When tough times come, it’ll be very rapid, indeed.”

And, as outlined in his book, he believes the “climate downfall” will be quite the opposite from an old adage: “It’s darkest before the dawn.” In his view, it’ll be: “It’s brightest just before the darkness” (which incidentally defines High Capitalism today, in terms of capital growth but not in terms of individual gratification).

Lovelock’s climate warning: “Assume the system becomes unstable and goes into positive feedback, as the positive feedback strengthens, any small permutation in either direction gets amplified.” Which describes the trigger behind “climate downfall,” when least expected.

In point of fact, there are already instances of “positive feedback,” e.g., permafrost collapsing in the North and disappearance of arthropods in tropical rainforests, among many other instances. It has already started, where nobody lives.

He further stated that he feared that the earth’s move to a new state 5-6C hotter is probably inevitable, and that we should be planning to meet that challenge. There are already early signs of that, especially in the northern latitudes.

Even though Lovelock has personally planted 1,000 trees, he admits that the climate problem can’t be so easily solved: “You cannot plant an ecosystem. An ecosystem includes: bacteria or haematids, insects, invertebrates and all kinds of stuff, all the way up to big trees. You cannot plant ecosystems… it has to come naturally.”

Recently (August 2018) in an interview, he said: “Humans’ time may have run out and artificial intelligence could be about to take our place on Earth. In that interview, he also proclaimed: “The Earth is in dire trouble and could soon experience intense climate-related disasters.” (Source: Independent, August 8, 2018)

“Mr. Lovelock said that he felt the Earth was something like himself. It is very old, but still has some time left. “I’m looking forward to quite a few years to go in this beautiful region and so is the planet, but you can’t bank on it,” he told the Today programme,” Ibid.

Key US Allies in the Middle East Are the Real Tyrants