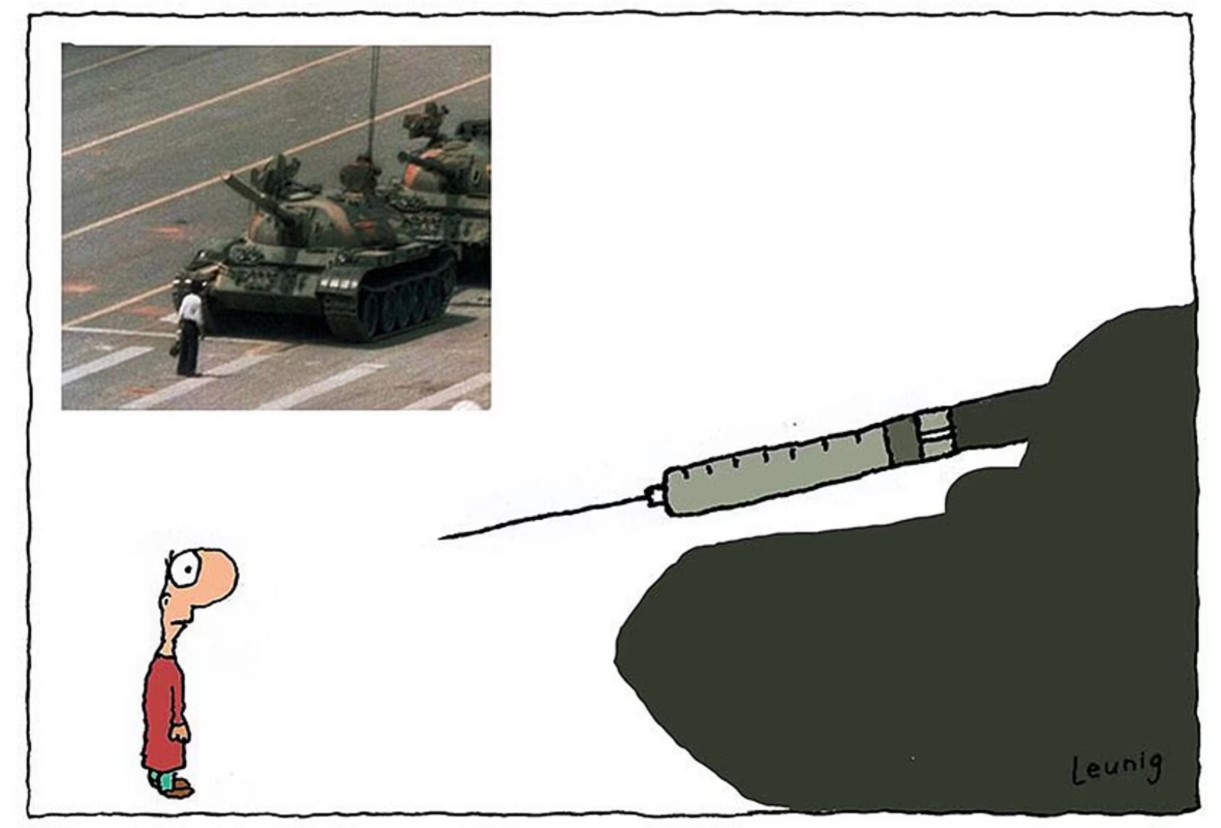 A renowned Australian cartoonist has said he lost his prime spot in a Melbourne-based newspaper after he drew parallels between the Tiananmen Square protests and Covid-19 vaccine mandates in a new cartoon.

Cartoonist Michael Leunig, sometimes referred to as Australia’s “living national treasure,” has revealed that he was forced out of his position on the editorial page of The Age daily newspaper after publishing a political cartoon criticizing the government’s push for mandatory vaccination.

Speaking to The Australian on Monday, Leunig said that while the editorial team has censored about a dozen of his works this year, the last straw appeared to be an anti-mandate cartoon which was a play on the iconic ‘tank man’ photo. Leunig’s cartoon shows a man staring down a tank, with its main gun being replaced by a syringe.

The original photo depicts a lone Chinese protester standing before a line of tanks during the 1989 pro-democracy protests at Tiananmen Square.

While his cartoon was rejected by The Age, Leunig published the drawing on Instagram, triggering backlash from the proponents of vaccine mandates.

Shortly after the controversy erupted, Leuning, who worked at the newspaper for over 20 years, was told that his services as a political cartoonist were no longer needed. The Age’s editor, Gay Alcorn, reportedly told the artist that he was “out of touch” with readers before notifying him of his dismissal. While Alcorn praised Leuning as “brilliant” in a comment to The Australian, he confirmed that his works would no longer appear on the editorial page. The newspaper still plans to commision lifestyle cartoons from Leuning, however.

Leuning accused the newspaper of “wokeism and humorlessness,” defending the cartoon as an accurate reflection of the times.

“The Tiananmen Square image is often used in cartoons around the world as a Charlie Chaplin-like metaphor for overwhelming force meeting the innocent powerless individual. In my view, it is a fair enough issue to raise in the most locked-down city in the world,” the cartoonist said, referring to Melbourne, which set a record for the longest cumulative Covid-19 lockdown after shutting down for 262 days.