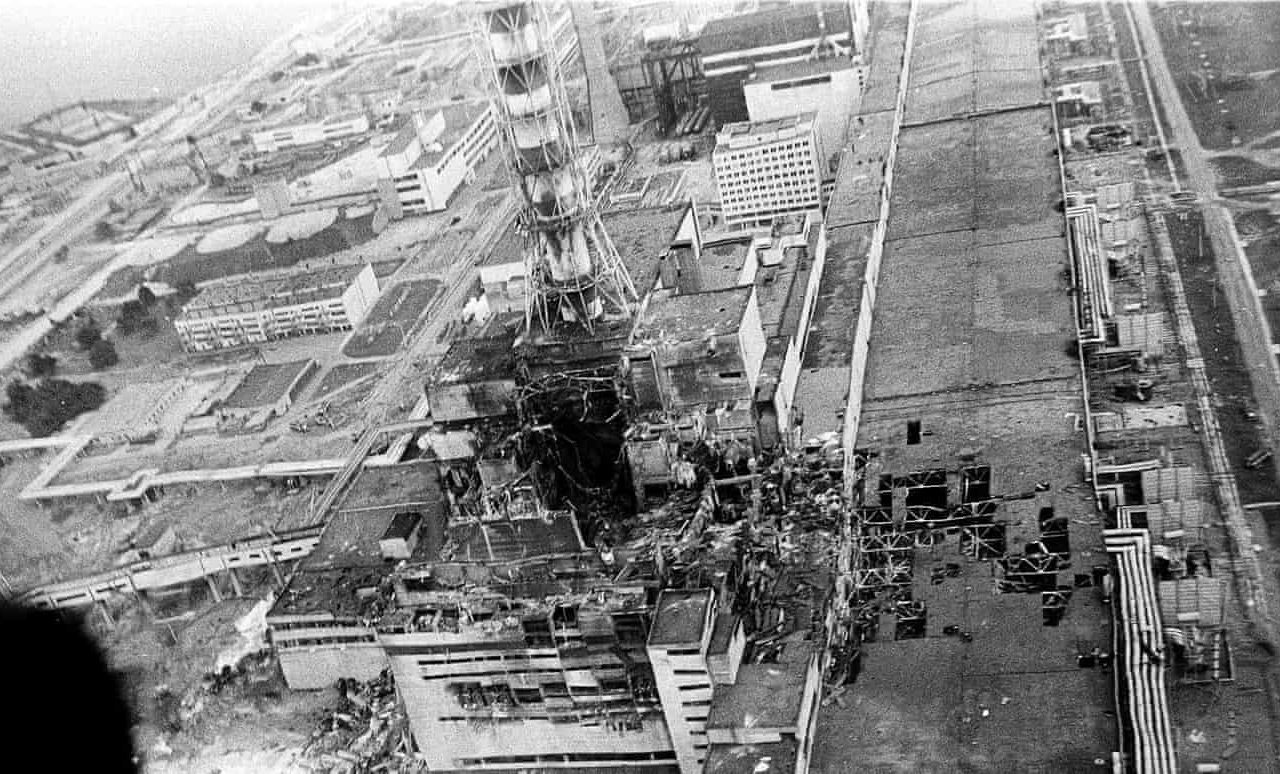 The remains of the Chernobyl nuclear power plant after the explosion. Photograph: AP

Like the mythical Phoenix, Chernobyl rises from the ashes.

A recent… “Surge in fission reactions in an inaccessible chamber within the complex” is alarming scientists that monitor the ruins of the Chernobyl Nuclear Power Plant in Ukraine. (Source: Nuclear Reactions at Chernobyl are Spiking in an Inaccessible Chamber, NewScientist, May 11, 2021).

It is known that this significant renewal of fission activity is located in Sub-Reactor Room 305/2, which contains large amounts of fissile material from the initial meltdown. The explosion brought down walls of the facility amongst tons of fissile material within the reactor as extreme heat melted reactor wall concrete and steel combined with sand used to control the explosion to form a lava-like intensely radioactive substance that oozed into lower floors, e.g., Room 305/2. That room is so deadly radioactive that it is inaccessible by humans or robots for the past 35 years.

Since 2016, neutron emissions from Room 305/2 have been spiking and increased by 40% over the past 5 years. It signals a growing nuclear fission reaction in the room. According to Neil Hyatt/University of Sheffield-UK: “Our estimation of fissile material in that room means that we can be fairly confident that you’re not going to get such rapid release of nuclear energy that you have an explosion. But we don’t know for sure… it’s cause for concern but not alarm,” Ibid.

If it is deemed necessary to intervene, it’ll require robotically drilling into Room 305/2 and spraying the highly radioactive blob with a fluid that contains gadolinium nitrate, which is supposed to soak up excess neutrons and choke the fission reaction. Meanwhile, time will tell whether the monster of the deep in Room 305/2 settles down on its own or requires human interaction via the eyes and arms of a robot, which may not survive the intense radioactivity. Then what?

Meanwhile, an enormous steel sarcophagus, a $1.8bn protective confinement shelter, the New Safe Confinement (NCS) was built in 2019 to hopefully prevent the release of radioactive contamination. NCS is the largest land-based object ever moved, nine years construction in Italy delivered via 2,500 trucks and 18 ships. It is expected to last for 100 years. Thenceforth, who knows?

Nevertheless, according to nuclear professionals, the question arises whether this recent fission activity will stabilize or will it necessitate a dangerously difficult intervention to somehow stop a runaway nuclear reaction.

Along those lines, the world-famous Doomsday Clock, initially based upon the threat of nuclear warfare, measures humanity’s nearness to utter annihilation: The Bulletin of the Atomic Scientists (“BAS”) a global organization of science and policy experts, has set the famous clock at 100 seconds to midnight: “The bad news is that we’re still closer to midnight than we’ve been at any time since the clock was introduced more than 60 years ago because: (1) widespread mishandling of the COVID-19 pandemic in nations worldwide (2) little progress in eliminating nuclear weapons (3) insufficient mitigation of destructive climate change, and (4) threats to national security by rightwing extremists, the BAS decided to hold the clock at the present unsettling time slot, as a warning and “wake-up call.” (Source: Do0msday Clock Stands at 100 Seconds to Midnight, LiveScience)

The perilous setting of the clock so close to midnight is warranted on several counts, e.g., COVID pulled back the wizard’s curtain, revealing a cartoonish figurine of irresponsibility by governments of the world to handle emergencies: “An historic wakeup call that governments are woefully unprepared to handle pandemics,” Ibid.

Moreover, “global carbon emissions, a major driver of human-induced climate change, temporarily dropped about 17% due to the pandemic, but have largely bounced back… still, the impacts of escalating climate change led NASA scientists to declare 2020 the hottest year on record,” according to Susan Solomon, a professor of environmental studies at the Massachusetts Institute of Technology (MIT), and a BAS Science and Security Board member, Ibid.

And, of utmost concern, the nuclear threat remains “unacceptably high,” according to Steve Fetter, professor of public policy at the University of Maryland, with the U.S. allocating more than $1T to modernizing its nuclear weapons programs, as China, India, No. Korea, and Pakistan expand arsenals. “By our estimation, the potential for the world to stumble into nuclear war — an ever-present danger over the last 75 years — increased in 2020,” Ibid.

Of special note, the forward momentum in the clock’s proximity to midnight occurred recently, with the advent of Trump’s presidency. In 2018, it ticked to two minutes to midnight. The only other time it advanced that far was in 1953 when the U.S. and Russia conducted their first hydrogen bomb detonations within 6 months of each other.

The Doomsday Clock stood still in 2019, but ticked forward again in 2020, to reflect humanity facing “a true emergency — an absolutely unacceptable state of world affairs that has eliminated any margin for error or further delay,” Ibid.

Thus, the world is at risk on multiple fronts never before seen throughout the history of the Doomsday Clock (est. 1947) initially set at seven minutes to midnight when nuclear weapons were humanity’s biggest threat. Now, nuclear war shares that formidable baton in an on-going hazardous marathon with: (1) climate change, (2) inept governments, and (3) widespread use of social media platforms that spread misinformation that erodes trust in media and science, throughout the world.

Moreover, according to the BAS, the enlarging rightwing movement threatens U.S. national security: “These extremists represent a unique danger because of their prevalence in federal institutions such as the military and the potential that they might infiltrate nuclear facilities, where they could access sensitive information and nuclear materials,” BAS representatives said. “Officials need to act decisively to better understand and mitigate this threat,” Ibid.

Throughout history, political parties that rely upon lies bring society down to its knees with shameless destruction, for example, the fall of Rome, the 5th century AD: “By the time of Augustine (354-430 AD), the Roman Empire had become an Empire of lies. It still pretended to uphold the rule of law, to protect the people from the Barbarian invaders, to maintain the social order. But all that had become a bad joke for the citizens of an empire by then reduced to nothing more than a giant military machine dedicated to oppressing the poor in order to maintain the privileges of the rich. The Empire itself had become a lie: that it existed because of the favor of the Gods who rewarded the Romans because of their moral virtues. Nobody could believe in that anymore: it was the breakdown of the very fabric of society; the loss of what the ancient called the auctoritas, the trust that citizens had toward their leaders and the institutions of their state.” (Source: Cassandra’s Legacy, The Empire of Lies, February 8, 2016).

‘Trailblazer in the Name of Peace’: Anti-War Hero Frances Crowe Dies at 100

‘Blatant Attempt to Intimidate’: Trump Administration Proposal Threatens Pipeline Protesters With Up to 20 Years in Prison