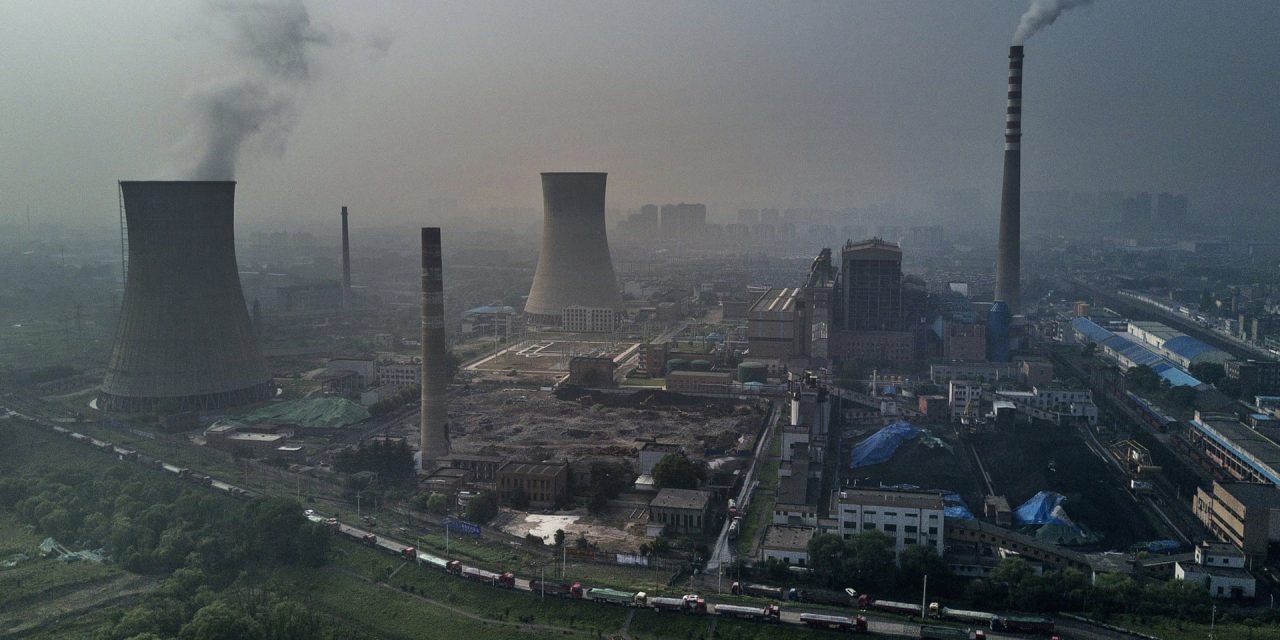 China’s failure to kick a long-standing addiction to coal has thrown a knockout punch to the Paris Agreement of 2015, including its 195 signatories. Suddenly, out of the blue, the world has turned upside down!

Sixteen months ago July 16th, 2018: “China and the European Union on Monday reaffirmed their commitment to the Paris climate change pact and called other signatories to do the same, saying action against rising global temperatures had become more important than ever.” (Source: China and EU Reaffirm Paris Climate Commitment, Vow More Cooperation, Reuters, July 16, 2018)

At the time, Greenpeace congratulated China and the EU by contrasting it with Trump’s refusal to commit the United States to the Paris climate accord: “What gets the pair together isn’t just Trump – China and the EU understand the opportunities offered by a clean and climate-safe world.”

Astonishingly, over the past 18 months China has added enough new coal-based electricity generation (43GW) to power 31 million homes. King coal has returned. Not only, China is also financing 25% of all new proposed coal plants outside of its own borders, e.g., South Africa, Pakistan, and Bangladesh. They’ve gone coal gaga.

In less than two years, China is once again immersed in a vast “coal boom,” similar to its “one new coal plant per week” 2006-2015 commitment, resulting in air pollution so thick it could be cut with a knife, now replenished as new coal power plant construction is planning an additional 148GW, a number that equals the current total coal generating capacity of the EU.

Henceforth, major coastal urban centers throughout the world will be better off allocating their Green Funds to seawalls, huge towering seawalls in a throwback to 12th century feudalism when towering walls were erected to protect “civilized society” from hordes of raiding Mongols that ruled China well into the 14th century. Figuratively speaking, the Mongols are back!

Additionally, powerful coal and electricity interests in China are pushing for a much bigger increase in overall coal power capacity. After all, communism is not adverse to influence by big money, rich fossil fuel interests. And, unremarkably, Donald Trump adds “America’s seal of approval” to Chinese fossil fuel interests’ pleas for more and more coal and less and less Paris ’15. After all, according to myth as well as some truths of yesteryear, American leadership sets the pace.

China is not alone in its renewed love affair with coal, India’s coal-fired generation capacity during the seven years to April 2019 increased by 74% (Source: India Expects Coal-fired Power Capacity to Grow 22% in 3 Years, Reuters, July 31, 2019) As such, India is on track to become the world’s second largest coal consumer behind China sometime within the next decade.

Along the way, according to the World Health Organization, 14 out of 20 of the world’s most polluted cities are in the heart of India. With a straight face, PM Modi claims: “If we have to meet demand and address the intermittencies we have with solar and wind, we have no choice but to keep depending on coal-based generation in the near future,” Ibid.

Even more remarkably, the 120% planned increase in fossil fuels comes on top of a new record 37.1 billion tons of carbon emissions from fossil fuels in 2018. By all appearances, record fossil fuel production looks poised to continue forever into a vast climate void of darkness and potential disruptive chaos.

Adding an explanation point to that 120% increase, it includes 280% more coal, which, according to Michael Lazarus, author of “The Production Gap Report” and a director of Stockholm Environment Institute: “That puts the world on a path to more than 7.2 degrees F (4 degrees C) of warming.” And, that’s devastating!

Accordingly, a major scientific forum of a decade ago entitled “4 Degrees Hotter” claimed: “Less than a billion people will survive. Expect, on average, more than a million human global warming deaths every week.” As such, mass graveyards stacked with bodies will become the new normal.

Prominent climate scientists are quoted in that 4C forum:

According to Professor Hans Joachim Schellnhuber, one of Europe’s most eminent climate scientists, director of the Potsdam Institute: “At 4C Earth’s … carrying capacity estimates are below 1 billion people.”

Echoing that opinion, professor Kevin Anderson of the prestigious Tyndall Centre for Climate Change stated: “Only about 10% of the planet’s population would survive at 4C.”

Accordingly, a global average of 4C means land temperatures would be 5.5C-6C hotter, especially inland from coasts. The tropics would be too hot for people to live and most of the temperate regions would be desertified.

As a result, half of the planet would be uninhabitable. Populations would be driven towards the poles. Over 136 port cities each with populations of one-half to one million would require sea walls or translocation of nearly one-half billion people.

In Europe, new deserts would spread to Italy, Spain, Greece, and Turkey as the Sahara figuratively leaps across the Straits of Gibraltar. In Switzerland, summer would be as hot as Baghdad today. Europe’s population would be forced into a “Great Trek North” in order to survive.

At the end of the day, a 4C planet means an unforgiving, merciless world of unknowns.

Why Everything is Fu**ed