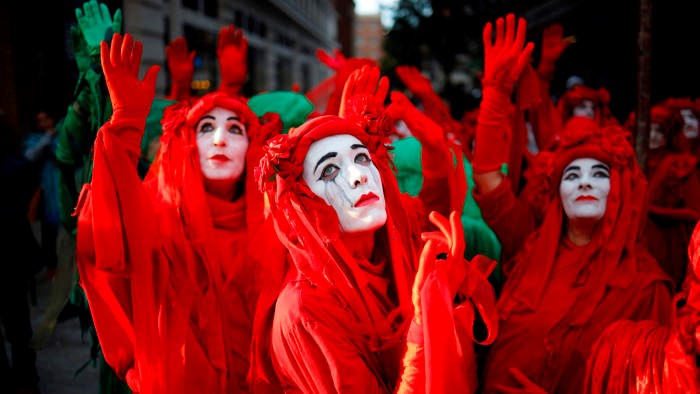 It is the fastest-growing environmental movement ever. As such, it is only too obvious that “people get it” when it comes to climate change/global warming because they’re jumping aboard like swarms of locusts. In fact, XR’s truthful exposure of the climate crisis/global warming is single-handedly turning average citizens of the world into fighting mad radicalized eco warriors. People who ordinarily do not get involved in politics or advocacy of any kind are suddenly eco warriors.

XR’s swagger is similar to the San-Culottes of 18th century France. At the time, the French common people (Sans-Culottes) were radicalized by their poor quality of life under the Ancien Régime. They rebelled; they changed history in the face of the most powerful monarchy in all of Europe, as their revolutionary motto Liberty, Equality, Fraternity, introduced via Jean Jacques Rousseau’s Social Contract (1762), remains to this day.

XR has 485 groups in 72 countries. Its demands are simple and straightforward; however, the challenge of meeting their targets requires a WWII Marshall Plan worldwide coordinated effort:

Their demand of net zero emissions means a complete overhaul of how the world is organized as a society. Everything changes from transport, to domestic and industrial energy systems, to food production, to overall levels of consumption. It’s revolutionary in every respect, but in that regard, climate change itself sets one horrendous record after another as the biosphere itself experiences revolutionary changes, in some instances 10x faster than the paleoclimate record.

XR has pledged to shut down 60 cities, including London, NY, Buenos Aires, Sydney, Cape T0wn, and Mumbai, government buildings, airports, and financial districts during this month of their genesis. They teach maximum disruption to provoke political action, gluing themselves to airplanes and the gates of Buckingham Palace and obstructing major highways and governmental offices. They peacefully disrupt society at its central core and consider arrests and jail time as merit badges.

According to the Financial Times, XR has seen a surge of donations, including celebrities and big names in finance like Sir Christopher Hohn, head of TCI hedge fund who donated £500,000, commenting: “I made the donation because humanity is aggressively destroying the world through climate change and there is an urgent need for us all to wake up to this fact.” (Source: Leslie Hook in London, Financial Times, October 11, 2019)

Total fundraising during XR’s first 12 months amounts to  £2.5m. Supporters include the band Radiohead, actress Emma Thompson, and punk artist Joseph Corre. Its biggest institutional donor is the Climate Emergency Fund, which is a US charity with donors like Rory Kennedy (daughter of Robert K) and Aileen Getty, heiress to the Getty Oil fortune.

XR distinguishes itself from other environmental groups because it advocates civil disobedience, going so far as breaking the law to make its point. The global emergency required to stem our radically changing climate does not allow for gradualism. They need results now.

After all, following years of hollow promises and empty commitments by governments of the world, XR recognizes the only way to get the job done is by breaking laws via civil disobedience. Nothing else seems to work, and so far, XR has been successful beyond initial dreams.

XR’s April ’19 protests were powerful and fruitful, creating a massive surge of public concern as the climate crisis has subsequently been categorized in the UK as one of the top five most important issues facing the country. The government has actually legislated net-zero emissions by 2050, and Labour is headed for a much more ambitious target of 2030.  Nobody thought a two-week blockade of central London would be met with so much public supp0rt. In all, XR has moved 90 towns and cities in the UK to adopt net-zero plans.

XR is doing something quite remarkable. Without firing a shot and without financing to start its campaign, it has impacted average citizens around the world. It appeals to society’s elemental sense of right versus wrong. “The truth” is their mantra. It resonates with people that have turned cynical, as world leaders, especially in English-speaking countries, have abused the long-standing privilege of honoring the truth. Rather, the world hangs by a thread of lies and deception, which is tenuous leadership.

“The truth” gives Extinction Rebellion a powerful edge. People respect it. As it happens, a world order filled with leadership of thuggish liars and overt deception has set the stage for XR to succeed.  It’s why average people are willing to sacrifice by prostrating their bodies on city streets. They’re smitten by the allure of truthfulness, for a change!

Similar to the circumstances surrounding the French Revolution, that beheaded its king, today the public is cynical and crass and motivated to fight because of massive failures by the status quo, lying, deceiving, thuggish personalities in positions of power. The eyes of the world watch America’s carnival barkers and their sideshows strut. It sickens people to the point that, when XR comes along, it’s a breath of fresh air.

XR should do very well in America.