Extinction Rebellion: What is it? 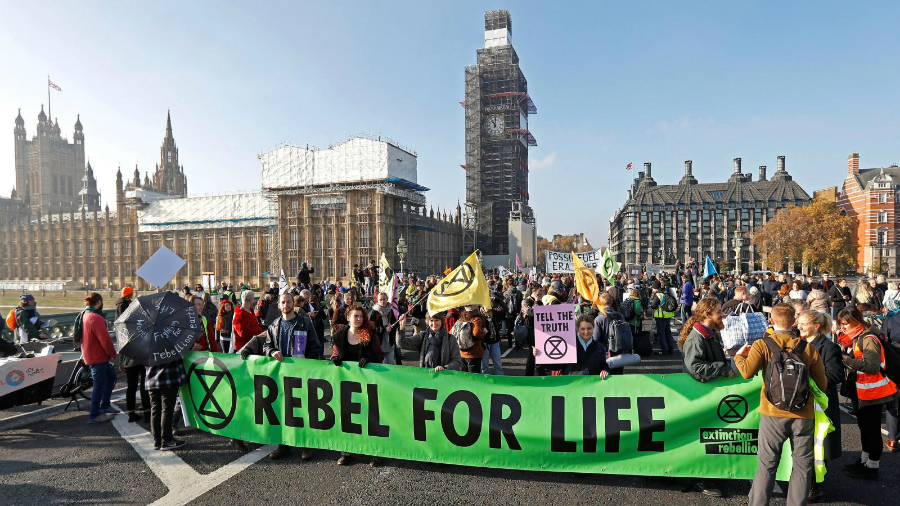 In that regard, ER, which started in the UK, says government must reduce carbon emissions to Net Zero by 2025, or else! Social chaos will spring loose from within the darkened shadows of a raging climate, bringing civilized society to its knees and within current lifetimes. For proof, read the science, which says it all. We’re doomed without taking action to cut greenhouse emissions to Net Zero.

In that regard, in November 2018 ER activist extraordinaire Jenny Shearer super glued herself to a railing outside the glorious golden-trimmed gates of Buckingham Palace in expectation that: “This will get the Royal family to come and join us.” Meanwhile, another 2,000 ER activists brought a coffin, which symbolized a “sure-fire death sentence” facing the “next generation” vestiges of the present-day crisis.

For ER warriors, the climate crisis is like a freight train with failing brakes barreling down a mountainside headed for a massive wipeout of society. Regrettably, it’ll happen way too soon to take comfort today.

This coming October 31st marks the one-year anniversary of ER from beginnings on Parliament Square on October 31st 2018 when the ER leaders announced a Declaration of Rebellion against the UK government, expecting a couple hundred people to attend. Surprisingly, 1,500 showed up to exercise their right to peaceful civil disobedience whilst breaking the law and getting arrested.

Shortly thereafter, 6,000 ER activists peacefully blocked five major bridges across the River Thames. They planted trees in the middle of Parliament Square, and dug a hole for a coffin. Additionally, they lie down in streets or at entryways to public buildings, bringing parts of London and other UK cities to a standstill.

When asked why ER?

Hallam responded: “Millions of people around the world have realized, or have come to the point where something drastic has to happen… And, um… nothing is happening, and that means you have to start breaking the law in order to make change happen.”

According to Hallam, people are waking up to the fact that governments have been lying about the issue of global warming for the past 30 years and experts have been lying about the consequences, fudging the data or low-balling. Over the years, elites and governments have said carbon emissions would go down, but they haven’t; they’ve gone up 60% since 1990, and they’re still going up. This was supposed to be the decade when all sorts of positive stuff would happen, but it’s not happening.

“As a result, people are very angry. People are in a rage. People don’t want their kids to die. There are no words to describe how serious it is.”

According to Hallam, other organized groups, like Greenpeace, have “fundamentally failed” to alter the climate crisis. Across the board, everybody has failed.

“The fact of the matter is we are facing mass starvation within the next 10 years, social collapse, and the possible extinction of humans. It couldn’t be worse. This situation has come about after 30 years of failure, failure by the elites, failure by the governments, and failure by campaigners.” (Hallam)

As a result, the table has been set for a powerful aggressive hands-on approach to resolving the crisis, and ER is the most successful climate change movement in the UK. In the first year, 100,000 people signed up. As such, ER has changed the conversation in the UK because it is “dedicated to telling the truth,” and the truth is governments and elites have been lying to people for 30 years.

The truth is all about hard physics… the science is real, meaning: “We face social collapse as and when weather systems around the world collapse because of rampant climate change.”

As Hallam describes it, if there is no fundamental change in the structure of the global economy in the next ten years, then we’re headed for global catastrophe, and for certain mass social collapse with concomitant mass starvation.

BBC’s Sackur challenged ER’s ability to gain public support for its radicalized programs by utilizing a negative approach. In response, Hallam explained how before 1,200 arrests of ER eco radicals in the streets of London in April of this year in the biggest civil disobedience demonstration in British history, the British public didn’t have any opinion on climate emergency. Afterwards, 67% of the British public agreed there is an emergency. That is a remarkable achievement and enormously telling of hidden awareness by the general public.

Not only, but according to Hallam, the capitalistic system is in the process of destroying itself because it is destroying the climate. Increasingly, people in the streets are aware of this. Thus, socialism is no longer irreverent, as it gains credibility because the capitalist state of affairs ignores the crisis, and in fact feeds into it, which the general public understands much better than realized.

In celebration of a year’s resounding success, this coming October 2019 there will be thousands of people in massive civil disturbances in the streets of London, nonviolent, respectful, but disruptive. That’s ER’s methodology, and it works, as it additionally spreads to America and the world.

According to Hallam, unless governments and elites undertake immediate action, the trajectory for the planet is the death of six billion people this century.

Still, ER has experienced defections. Simon McKibbin, a lecturer at Cambridge University, left ER because of Hallam’s plan to shut down Heathrow Airport with drones. McKibben said: Flying drones into busy airspace is a departure from nonviolence. It threatens people and creates the potential of losing the good will of the public.

However, Hallam, who said he is not yet committed to using drones at Heathrow, is resolute, stating that if nonviolence does not work, then the next hurdle for society is bound to be the desperation of violence, which ER avoids. He says it is inevitable that ER will win the hearts and minds of the public as they awaken to the fact that their governments have failed them in this crucial life and death struggle.

After all, climate change/global warming is one of the most recognizable things in human history, but maybe that’s part of the problem, as familiarity nurtures solace. Which is one more reason why Extinction Rebellion is so important in rescuing civilization from falling into the surrealism pit of a very strange rabbit hole.