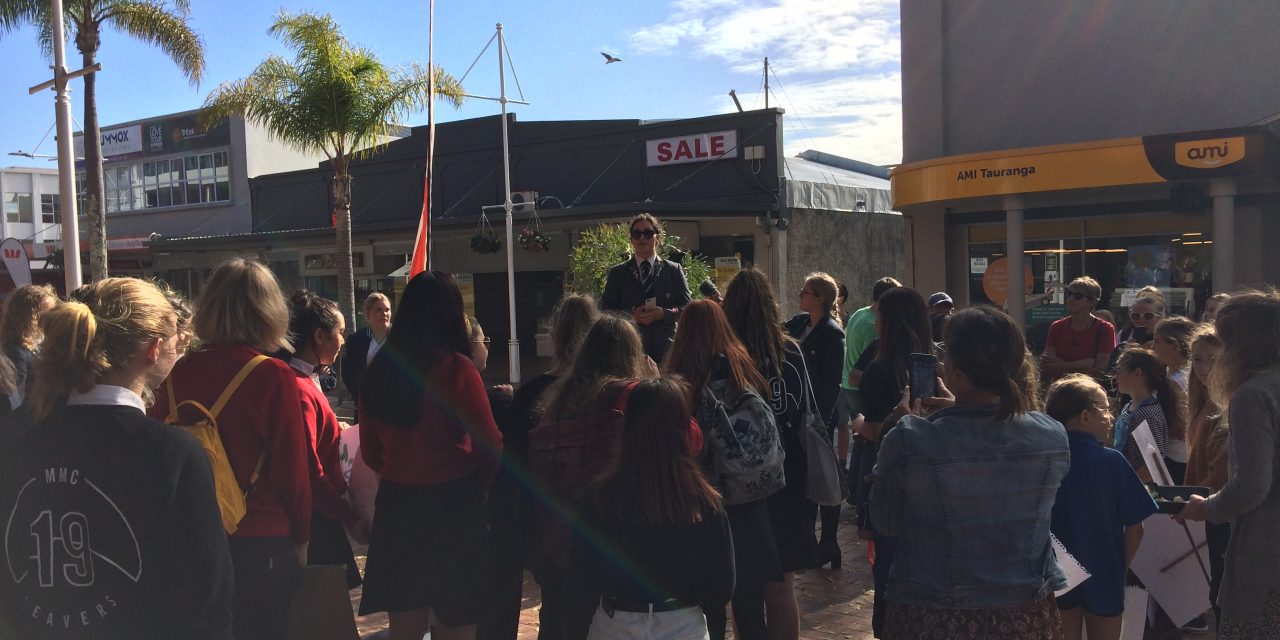 Zoe, a student climate striker, speaks to her peers - Photo by Jo Wills

This was the message Marama Davidson, NZ Green Party leader, gave students gathered for the strike against climate change in Tauranga, on Friday 24th May. She said the problem we’re facing has arisen from the power being in the hands of a few, and she implored the students to stay strong in their conviction.

Students have been striking all over New Zealand. Much has been said about the rights and wrongs of them skipping school to march the streets. To the students, I say march and raise your voices louder. 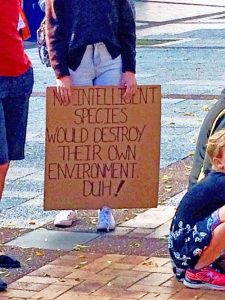 A student holds an important message for decision makers

From my experience, these students understand more about the problem and solutions we’re facing than many of the adults making decisions on their behalf. I spoke to a few of them at the strike to get their thoughts on what the government should be doing to take action against climate change and what they were doing individually.

Let their words be a warning to decision makers at any level—these students will shape the future.

Zoe de Malmanche from Mount Maunganui College spoke to her peers and reflected on the impact the strikes have had. She said, “The most important thing these climate protests have resulted in is conversation,” and she thinks it’s this conversation that has given more people the ability to understand climate change. This is because the “sit down discussions at the dinner table” between striking students and their parents are encouraging those who can vote (on these issues) to vote for the “good of the future.”

This is really insightful. It’s also really powerful because it means the awareness and willingness to take action of one generation is rubbing off on another. I have hope this will start to shift the imbalance of power Marama mentioned.

I spoke to more students from Mount Maunganui College (MMC) as well as Otumoetai College (OC) and Tauranga Girls College (TGC) who talked about the transformation taking place in their own lives as well as what they thought our leaders should be doing.

Sophie Tinholt (OC) said her family has solar power, buy in bulk and carpool. Anna Petersen (MMC) said she’s vegetarian, working on going dairy free and trying to get her family to follow, as well as choosing to bike or walk everywhere. Brittany Fletcher (MMC) said she is vegan and strives towards zero waste, but is aware that the impact of her actions alone is not as effective as it could be if everyone was doing it.

Signs of support for the students

Brittany went on to say, “There needs to be more clarity about what ‘Zero Carbon’ looks like because people just don’t know.” This is true, because if people don’t really understand, it makes it difficult to take meaningful and necessary action. Anna also believes we need more “visible leadership to encourage societal change.” Leadership was mentioned a lot by the students, from declaring a national climate emergency through to including environmental outcomes into local town planning.

From what I saw and heard, it’s the students showing leadership, in both their words and their actions. They also talked to me about the need for better transport options so we don’t have to rely on cars, and about introducing regulations and restrictions on plastic manufacturing and waste.

These aren’t just idealistic visions of the youth. These are well considered, achievable solutions which are simply necessary. The students aren’t waiting around for someone to tell them what to do, they already know. One thing they would like to know is, when will they be heard and taken seriously?

Akira McTavish-Huriwai (TGC) made a suggestion to get local youth leaders “together on a panel so it makes it feel like our voices are being heard and recognised on the political stage.” I agree. I would extend that to say make the panel a direct contributor to the plans and policies that start to shape the Zero Carbon Act. 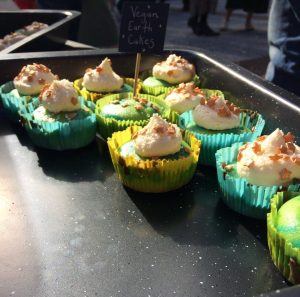 Vegan Earth Day cupcakes handed out at the strike

And why not? It’s these students who will be living the consequences of those plans and policies, so don’t they deserve a voice at the table? They are in touch with what’s happening on a global scale as well as where our towns and cities are falling short through a dangerous combination of apathy and a narrow view of progress.

As I was leaving the protest and the students were carrying on down the street, a woman who had come out of her shop to watch said to me, “What are they marching for?” She had that look so many give to young people when they create a scene, one of patronising indulgence, of nodding and smiling for a short while in their direction until the grown-ups have to go back to do the real work. I see this a lot from local politicians and business leaders, oblivious to the significance of the message they are missing.

It’s time for change on so many levels. We need to better understand and respond to the connection we have to the environment. This means taking responsibility for reducing our personal impact, and acknowledging the role we play on a global level. A big shift also needs to take place so all members of society are included into the future being created. This is when the system change will start to happen.

My advice to the decision makers is listen very carefully to what these students have to say. Many of them are already in the workforce, they are very close to voting age, they are already leaders with mana, and they are pissed off.

Talking About Weather, Fruit and Vegetables