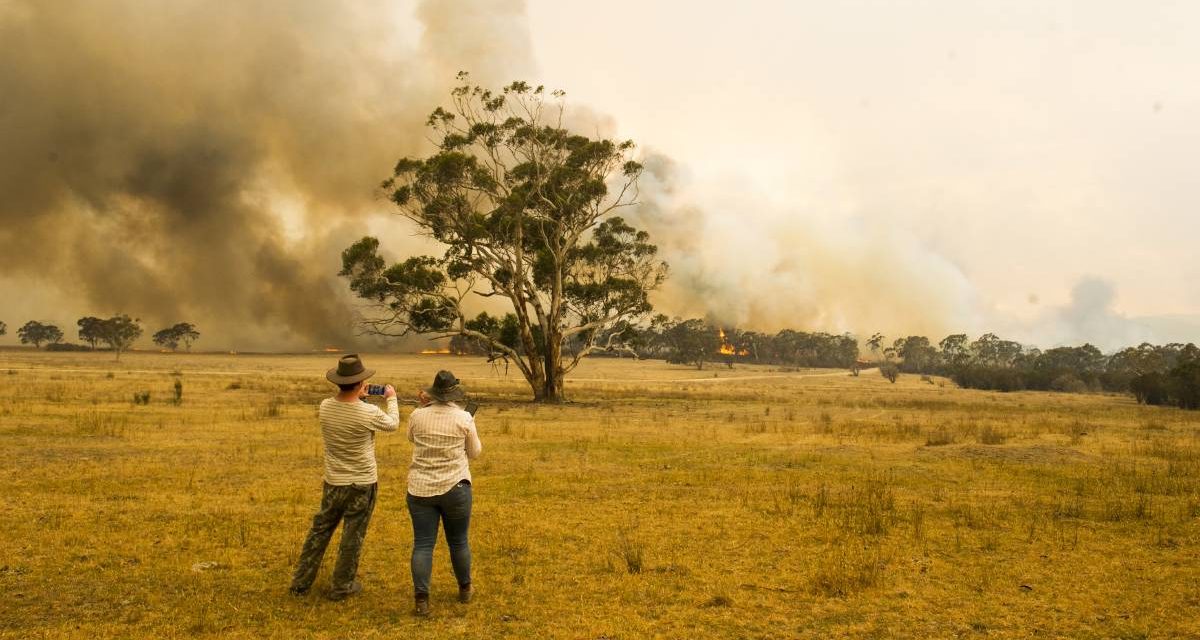 So far, the lives of more than a billion animals have been extinguished in the bushfires. A billion. Gone. Millions of hectares of native forests are burned, along with tens of thousands of dead livestock. Hundreds of family homes are now ash and dozens of families will forever mourn loved ones who died trying to protect either their homes or their communities.

The loss is almost unfathomable. And summer isn’t over yet.

A British MP described the bushfire crisis as a “wake-up call for the world” on global warming, but the Australian government is still asleep at the wheel.

The Prime Minister was desperately trying to convince everyone that the Coalition government has always acknowledged the link between the bushfires and climate change – while his backbencher Craig Kelly was on Good Morning Britain denying any link. It was only a few weeks ago that our Deputy Prime Minister dismissed anyone who linked climate change and bushfires as “inner-city raving lunatics”.

The fact is it’s hotter and drier than it used to be. The window for safely conducting hazard-reduction burning is shorter and the bushfire season starts earlier and lasts longer, exactly as the Garnaut review warned in 2008. Bushfires are now so intense that they create firestorms that spit lightning and blow winds powerful enough to flip 10-tonne fire trucks. Catching all the arsonists in Australia won’t change those facts.

There must be a reckoning.

Domestically, Australia’s emissions are rising, not falling, according to the government’s own figures. About 77 per cent of all the electricity generated in the National Electricity Market last year came from fossil fuels, though renewable energy has been catching up – despite the government’s best efforts to choke investment in the sector.

Per capita, Australia’s emissions are the highest in the OECD. It is true that Australia is responsible for 1.2 per cent of world emissions, but we are home to just 0.3 per cent of the world’s population. Australia emits more greenhouse gases than 40 other countries with bigger populations than ours.

But it’s the amount of fossil fuel Australia mines each year that is truly eye-popping.

For every Australian, the country mines 57 tonnes of fossil fuel CO2 per year. That is 10 times greater than the world average.

Every tonne of coal or gas mined in Australia adds approximately two and a half tonnes of heat-trapping gas to the atmosphere when it is burned, making bushfires more frequent and more intense. That’s not the opinion of “woke capital-city greenies”. It’s physics.

Australia is the third-biggest fossil fuel exporter globally, in CO2 potential, behind only Russia and Saudi Arabia. Between 2000 and 2015 Australian coal exports more than doubled. Over the same time period, liquefied natural gas exports tripled and, since 2015, have nearly tripled again. Australia is the largest coal exporter in the world, and last year Australia became the largest LNG exporter in the world too, exporting an estimated 77.5 million tonnes (about 200 million tonnes of CO2 when burned).

If we are to avoid summers becoming even hotter, and in many areas drier and deadlier, in our lifetime, Australia should immediately drop its plans to use carryover credits and implement a ban on any new fossil fuel exploration and a moratorium on new coal mines. And we should put our diplomatic muscle into imploring the rest of the world to join us.

Australia urgently needs to develop plans for the managed decline of our fossil fuel sector. Instead, Australia plans to keep expanding it, and the Adani coal mine is just the tip of the iceberg. But Australia’s plans to expand gas and coal exports are less iceberg and more Hindenburg. Instead of taking action to slow climate change, Australia is actively speeding it up.

While fossil fuel companies rake in the cash for causing global warming, it’s the rest of us picking up the tab for the damages. Fossil fuels are currently lucrative exports, but the companies are mainly foreign owned, so most of the profit is exported. Many of the companies pay little or no company tax.

The Prime Minister has belatedly announced a $2 billion bushfire recovery fund, funded by taxpayers. Why shouldn’t the fossil fuel companies chip in their fair share?

The Australia Institute has proposed a permanent National Climate Disaster Fund to reduce the burden of climate disaster response and recovery costs on Australian taxpayers, businesses and households. A levy of $1 per tonne of carbon dioxide for all coal, gas and oil produced in Australia would raise around $1.5 billion a year.

A moratorium on new coal mines, a ban on fossil fuel exploration and a climate disaster levy are just a few policy suggestions, of the many required to match the scale of the disaster Australia is currently experiencing.

We already know Australia can reduce emissions and grow the economy, because we’ve done it before. During the two years Australia had a carbon price, Australia reduced its emissions by 2 per cent and grew the economy by 5 per cent, while employment grew by 200,000 jobs. Funny, then, that the Business Council of Australia labels anything more ambitious than business-as-usual climate policy as “economy-wrecking”. I wonder how the businesses on the South Coast of NSW would describe the impact of the bushfires on their economy right now?

It’s high time the government confronted the climate deniers within its ranks, because they are damaging the country, not just party room harmony.

The chief executive of the small business lobby, Peter Strong, told the ABC that climate deniers in the government’s ranks should now take it upon themselves to “shut up”, “sit at the backbench where they belong” and avoid “interfering in developing processes to respond to this situation”.

Has any government minister condemned Craig Kelly’s frankly embarrassing statements on Good Morning Britain? Has any government MP repudiated LNP senator Gerard Rennick’s comments from last year that the Bureau of Meteorology has been in a conspiracy to change temperature data to suit a “warmist” agenda?

Because of the bushfire crisis, the Prime Minister has a clear opportunity to take on the climate deniers within Coalition ranks – though that may be expecting too much from a Prime Minister infamous for bringing a lump of coal into Parliament to admonish us: “don’t be afraid”.

Well, we’re afraid now. But just as Scott Morrison can’t go back in time and meet the fire chiefs who tried to warn him what was coming this summer, Australia cannot get back the decades we’ve lost avoiding climate action.

This bushfire crisis is a wake-up call we cannot afford to ignore. All we can do now is continue mobilising to help each other, and demand the government listens like their political lives depend on it.