In the last week, the realities of US foreign policy have been exposed by a leaked audio tape, a leak about a US attack on the Russian electrical grid, and US attempts to extradite Julian Assange. All the information points to a foreign policy that violates international law and standards, perpetrates wars and conflict and seeks to undermine press freedom in order to commit its crimes in secret.

This is not new information to those of us who closely follow US foreign policy, but these new exposures are broad and are in the mass media where many millions of people can view them and gain a greater understanding of the realities of US actions around the world. Join the People’s Mobilization to Stop the US War Machine this September. 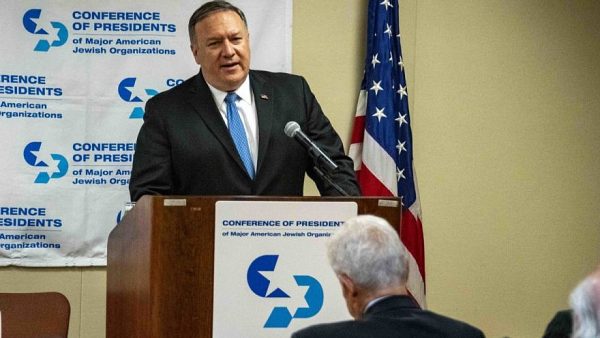 U.S. Secretary of State Mike Pompeo addresses a closed-door meeting hosted by the Conference of Presidents of Major Jewish Organizations on May 28, 2019. Credit: Ron Przysucha/U.S. Department of State.

Secretary of State Mike Pompeo Exposes Himself To Jewish Leadership

Secretary of State Mike Pompeo gave a foreign policy speech to the presidents of major Jewish organizations. The speech was remarkable because it shows the special attention this group receives. Very sensitive secrets of US foreign policy were provided to the audience. Thankfully, someone in the audience audio-taped the conversation, and as a result, millions of people in the US and around the world now know the truth about some critical US foreign policy issues. Here are some of the topics he discussed:

US Seeks To Stop Jeremy Corbyn Before He Is Elected: The audio includesPompeo promising to do his “level best” to stop Corbyn from ever being elected as Prime Minister of the UK. Pompeo was responding to a question, “Would you be willing to work with us to take on actions if life becomes very difficult for Jews in the UK?” This was about the false claim that Corbyn is anti-Semitic because he favors the rights of Palestinians and criticizes Israel. Pompeo responded:

“It could be that Mr. Corbyn manages to run the gauntlet and get elected. It’s possible. You should know, we won’t wait for him to do those things to begin to push back. We will do our level best. It’s too risky and too important and too hard once it’s already happened.”

The Secretary of State describing how the US would attempt to influence British elections comes despite all the claims of Russa allegedly influencing US elections. A Labour spokesman responded: “President Trump and his officials’ attempts to decide who will be Britain’s next prime minister are an entirely unacceptable interference in the UK’s democracy.”

US Coup in Venezuela not going well: In another US interference in democracy, Pompeo discussed the US coup in Venezuela. Pompeo described the opposition to Maduro as divided and acting in their own self-interest. He said: “Our conundrum, which is to keep the opposition united, has proven devilishly difficult.” Pompeo said in the meeting,  the image of unity was really only useful as a “public” facade.

Pompeo also admitted that he has been working on the coup in Venezuela “since the day I became CIA director.” He explained creating unity among the opposition “was something that was at the center of what President Trump was trying to do.” Pompeo became CIA director on January 23, 2017.

Despite the US saying in public that Juan Guaido was president of Venezuela, he admitted in the audio tape that Maduro was still president and he could not predict the timing of when he would leave, but he assured the audience that the economic war and other actions against the government and against the Venezuelan population would result in his leaving.

The efforts of the Embassy Protection Collective continue in court. The US is seeking to convict four protectors of federal crimes that could result in one year in prison and a $100,000 fine. The US has unlimited resources, we need enough resources to put on a strong defense. A jury verdict acquitting us of these charges will be another blow against the US coup in Venezuela. Donate here.

Kushner Peace Plan Unlikely, Iran Too Sensitive To Discuss: Pompeo told Jewish leaders that the Trump administration’s soon-to-be-released Middle East peace plan will be considered “unworkable,” and might not gain traction. Pompeo acknowledged the plan’s perceived favoritism to Israel and was not optimistic saying, “It may be rejected. Could be in the end, folks will say, ‘It’s not particularly original, it doesn’t particularly work for me.’”

Pompeo was about to get into other Middle East issues like Iran but expressed concern that someone might be taping the conversation and the information could be too sensitive. 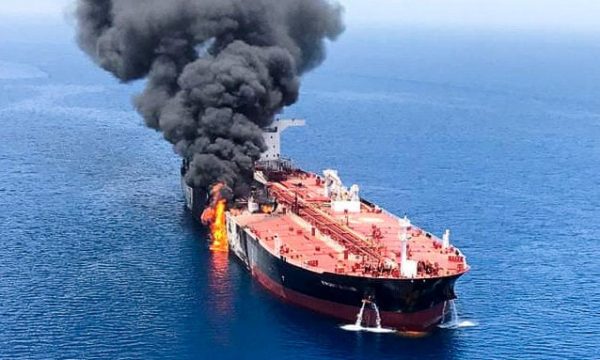 An oil tanker burns after the attack on 13 June in waters between Gulf Arab states and Iran. Photograph Reuters.

Iran Threats Heat Up Based On Unproven US Allegation

On June 13, two outbound tankers in the Gulf of Oman suffered from explosions on the side facing international waters. Iranian rescuers rushed to assist the two oil tankers, transferring all 44 crew members to Iran’s southern shores.

The US is claiming the attacks came from mines placed on the boats by Iran. The president of Kokuka Sangyo Marine, (shipowners), Yutaka Katada, said: “there is no possibility of mine attack as the attack is well above the waterline” and the crew described a flying object hitting the tanker.

The US blaming Iran gives us a “Remember the Maine!”/Gulf of Tonkin feeling, examples of false claims that led to war. The US provided a grainy, hard to understand video of a boat allegedly removing a mine from a tanker hours later. The US claims it was the Iranian Revolutionary Guard removing evidence of Iran’s involvement. There are many problems with this theory that raise more questions than answers.

The attack against the Japanese-owned tanker came at the moment that Japanese Prime Minister Shinzo Abe was meeting with Iranian Supreme Leader Ayatollah Khamenei. The meeting was a historic one, the first Japanese leader to visit Iran since its revolution 40 years ago. Would Iran attack an oil tanker and sabotage its own meeting with the Japanese leader? This theory strains credulity. The US accusation against Iran seems designed to undermine Iran-Japanese diplomacy. Foreign Minister Javad Zarif, said in a tweet, “Suspicious doesn’t begin to describe what likely transpired this morning.”

These attacks seem to be against the interests of Iran as they provide an excuse for escalation against Iran by the US and its allies. Neocons and US armed regimes who oppose Iran, including Israel, Saudi Arabia, and the United Arab Emirates, would all benefit from this attack.

Even though much of the media repeated the allegations, the suspicion that this was a false accusation against Iran was so strong that many media outlets noted the lack of evidence, e.g. the New York Times,  CNN, and NPR. The Saudi media immediately amplified the US accusation. US intelligence experts questioned the claim, raised doubts about the video and noted the US history in “ginning up” attacks for political purposes. Japan has asked for more proof, European governments questioned the claim. The lack of evidence for the US claim and the reality of how it makes little sense for Iran to make such an attack seem to be exposing the US more than undermining Iran.

US Cyberattack on Russian Electrical Grid

On June 15, the New York Times reported on interviews with military officials over the last three months that showed the US stepping up digital incursions into Russia’s electric power grid. The US has deployed computer code into the Russian electrical system for future cyber attacks. The actions are a warning to President Putin and a demonstration of how the Trump administration is using new authorities to deploy cybertools more aggressively, according to current and former government officials.

The Times reports the US “strategy has shifted more toward offense…with the placement of potentially crippling malware inside the Russian system at a depth and with an aggressiveness that had never been tried before.”

Last year, new authorities were granted separately by the White House and Congress to United States Cyber Command, an arm of the Pentagon, to conduct offensive online operations without receiving presidential approval. The Times reports that Trump has not been briefed on the details of these actions for fear of his reaction. Trump denies the report and accused the Times of “a virtual act of treason.”

US Behind Conviction Of Lula and others in Brazil

Glenn Greenwald obtained thousands of pages of communications between the people involved in the conviction of Lula da Silva, a popular politician in Brazil. It appears now that Lula was falsely convicted to prevent him from winning the presidency in 2018 and that the US was behind it. Brazilian judges are now calling for the conviction of Lula and many others who were targeted to be thrown out and an investigation into the massive corruption. Greenwald says there is more to come.

The US Hates When The Truth Is Exposed

Officials in the US government and leaders of transnational corporations are well-aware that they are violating or skirting international and domestic laws. When an official is caught on tape in a private meeting, leaks of documents are provided to the media or an off-the-record interview reveals US strategies for war, the government gets upset.

We do not have to look any further to see this than the attempt to extradite Julian Assange to face prosecution in the United States. The US has issued a formal request for the extradition of Assange on 18 charges, 17 of which are violations of the Espionage Act, that could incarcerate him for the rest of his life. The Magistrate’s Court scheduled a five-day extradition hearing beginning on February 24, 2020.

The video in this tweet shows the hatred prominent people have for Julian Assange for merely publishing the truth about US war crimes, State Department operations, the Guantanamo Bay Prison and corporate corruption.

The facade is being lifted on US foreign policy. It is no longer possible for the US to get away with its crimes. And global power is shifting. Last week, Russia and China signed two major agreements, thus ending the US as the dominant superpower and creating a multipolar world. Alliances are changing – India may partner with Russia and China.

We are facing a historic crossroad. Will the US continue to try to dominate the world using economic, cyber and military weapons, further isolating itself and wasting resources that are needed to meet human needs and protect the planet, or will the US become a partner in good faith with other great powers? It is up to us to determine which path is taken. Join us this September during the United Nations General Assembly to call for the US to be held accountable in the People’s Mobilization to Stop the US War Machine. Click here for more information.