What If Oumuamua Is the Real Deal? 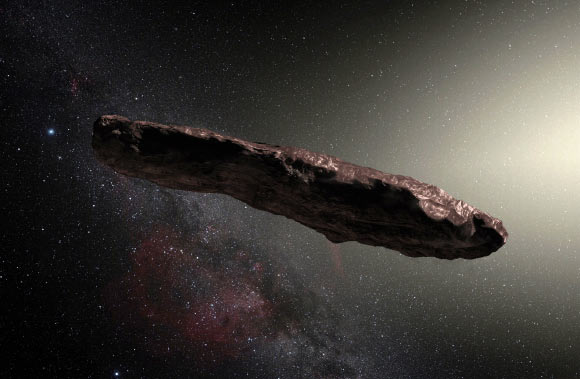 If Oumuamua is the real deal, meaning an alien craft, then Earthlings are doing some really weird stuff on the scale of alien intelligence. Think about it… If it’s an alien craft or drone there’s no way it entered the sun’s solar system, swooping within 15M miles of Earth, powered by fossil fuels.

Just imagine alien engineers 10.5 light-years away at “Aegir, aka: Epsilon Eridani b” fueling Oumuamua with cryogenic liquid methane and liquid oxygen (the fuel that powers Elon Musk’s SpaceX Raptor) for its big trip to the Milky Way galaxy and expeditions through Solar System Sol with its nine planets, including its exposure to a telescopic view by Earthlings. Hmm… wondering what fuel aliens actually use?

Oumuamua is the first known interstellar object in our solar system. It’s estimated to be between 330 and 3,280 feet long and between 115 and 548 feet wide and dark red in color, and it tumbles.

According to Harvard astrophysicist Avi Loeb, aliens visited via Oumuamua, whether merely by accident or intentionally with forethought. It should be noted that he pretty much stands alone amongst astrophysicists with his theory of aliens in our midst.

The evidence is fairly reasonably compelling but not absolute. For example, Oumuamua does not resemble an asteroid or comet because of numerous scientific reasons. Furthermore, its brightness is greater than 10 times more reflective than the space rocks of Earth’s solar system, in fact, shiny enough to suggest burnished metal, which is one of its many Wow factors! More convincing yet, when it zoomed past the sun, it actually “sped up faster than can be explained by our star’s waning gravitational grip alone.” (Source: Lee Billings, Astronomer Avi Loeb Says Aliens Have Visited, and He’s Not Kidding, Scientific American, February 1, 2021)

In support of his thesis that aliens visited, Dr. Loeb, who chairs the Board of Physics and Astronomy of the National Academies of Sciences and Engineering and Medicine, says: “Based on the data from NASA’s Kepler mission, roughly half of the galaxy’s sunlike stars have a planet about the size of the Earth, at about the same distance of the Earth from the sun, so that you can have liquid water on the surface and the chemistry of life as we know it. So if you roll the dice on life billions of times in the Milky Way, what is the chance that we are alone? Minuscule, most likely!” Ibid.

If it’s the real deal, then Oumuamua represents a lot. For starters, it means we are not alone! Whether that is comforting is a gigantic question mark, especially for the book of Genesis. Not only that, Oumuamua puts the hotshot technology of Earthlings in the Neanderthal category. After all, Oumuamua is breaking all known earthly speed records. At its recorded speed, it would travel from Earth to the moon in only 73 minutes! Apollo flights took three days.

Oumuamua has been the subject of intense scientific investigation and theorizing ever since it poked its head (nose cone) into our solar system in October 2017. A new study argues against several theories about a “natural origination”: “Oumuamua—a mysterious, interstellar object that crashed through our solar system two years ago—might in fact be alien technology. That’s because an alternative, non-alien explanation might be fatally flawed,” (Source: Rafi Letzter, Mystery of Interstellar Visitor ‘Oumuamua Gets Trickier,” Scientific American, August 19, 2020)

According to that article, most scientists think the idea that it’s alien technology is a long shot. Nevertheless, to this day, scientists still do not know how it accelerated “as if something was pushing on it,” Ibid.

Avi Loeb believes an alien machine, such as a lightsail, propels it via solar radiation, pushing it ahead. The referenced study shoots down the idea that Oumuamua’s acceleration was likely due to natural phenomena, i.e., solid hydrogen blasting invisibly off its surface. Rather, “A hydrogen iceberg travelling hundreds of millions of years through interstellar space would have fallen apart, cooked by starlight,” Ibid.

Whether Oumuamua’s the real deal is answered to the fullest extent possible in Avi Loeb’s book: Extraterrestrial: The First Sign of Intelligent Life Beyond Earth, Houghton Mifflin Harcourt, January 26, 2021.

Accordingly, Loeb answers in the affirmative that intelligent life is out there, and he suggests that, “Humans are not prepared to accept.” The implications, as mentioned in early reviews of his bo0k, include a very provocative rub stating extraterrestrial intelligence will serve to cure “human arrogance” and its proclivity for “self-destructiveness.” Loeb holds aliens in high regard as likely to be “superior beings,” that can reveal “the true meaning of life.” Although, he also speculates that aliens might be existentialists, believing that “life is absurd.” And, of course, earthlings already have some exposure to existentialists, like Kierkegard, Nietzcshe, Sartre, and Heidegger, but they’re not aliens, or were they?

Loeb’s book begins by saying: “Some scientists find my hypothesis unfashionable, outside of mainstream science, even dangerously ill conceived. But the most egregious error we can make, I believe, is not to take this possibility seriously enough.”

Considering the fact that there are objections to Loeb’s theory, in his defense, it’s probably a good idea to recall the instance of high-minded church leaders in the 17th century that refused to look through Galileo’s telescope. Ergo, history has not treated them well. In fact, time and again, history demonstrates that human foresight is too often based upon hindsight and/or outright ignorance.

For example, Giordano Bruno was burned at the stake on February 17th, 1600 because he argued, including other heresy matters, that stars might be the same as the sun and might have planets just like Earth, possibly with life. The Roman Inquisition tried him for heresy and his denial of core Catholic doctrines, burned alive!

To this day Oumuamua is still not classified as an asteroid, a comet or an ice chunk. It’s simply classified as an interstellar object, which interestingly has an alien connotation. According to Loeb, of course it’s hard to classify because (a) we’ve never seen one of these before and (b) it’s a byproduct of intelligent life outside of our solar system and beyond our deepest level of understanding. How do you classify that?

Moreover, it is silly to ignore the distinct possibility of Oumuamua’s signal of intelligent life beyond our solar system when serious consideration is given to the known fact that we earthlings launched Voyager I (crossing into interstellar space August 2012) and Voyager II (crossing into interstellar space November 2018) exiting our solar system, traveling into the vast unknown. Both spacecraft continue to send scientific information about their surroundings back home via the Deep Space Network (“DSN”). Why wouldn’t other civilizations do the same?

Based upon its current trajectory, by late 2025 Oumuamua will reach the outer edge of the Kuiper Belt, and then the heliopause boundary, the edge of the solar system, sometime in November 2038. And, be gone, following in the footsteps of Voyager II and I.