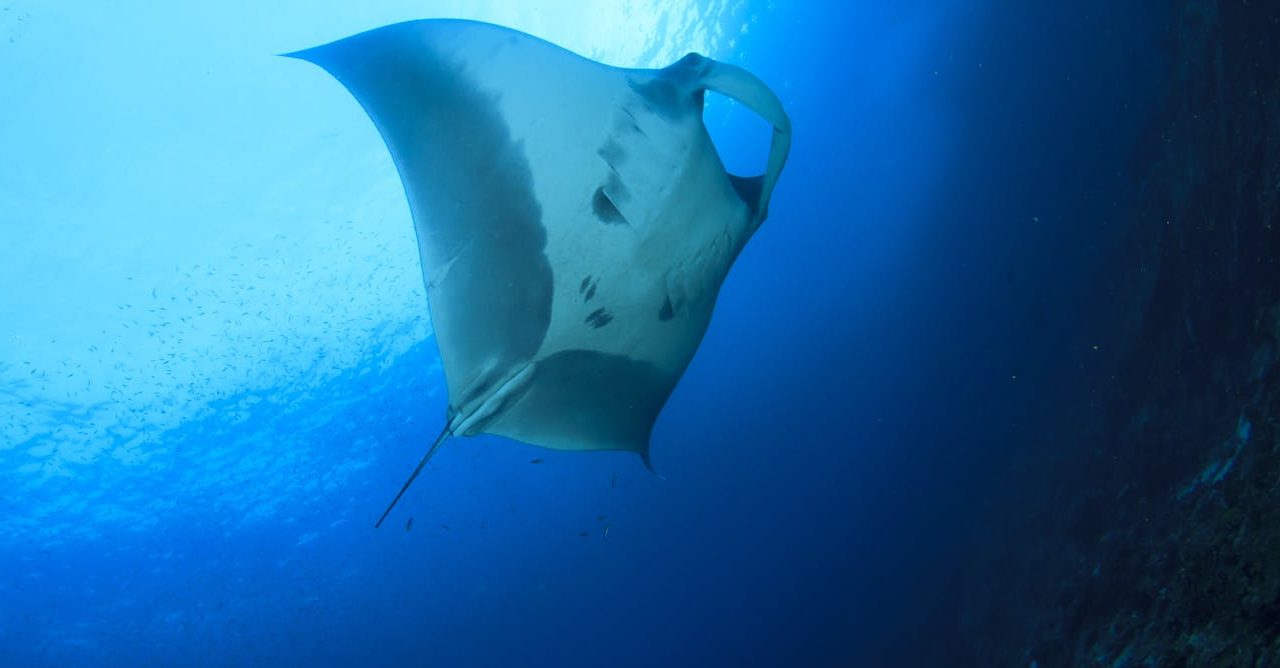 Written by David Sims / The Conversation

Oceanic sharks and rays live so far from land that the average person is unlikely to ever see them. But these species, which live in the vast open ocean, are also among the most revered, and include the great white shark and the giant manta ray. For millennia, their remoteness has allowed these species to largely avoid humans. But since the early 1950s, industrial-scale fishing fleets have been able to reach distant waters and gradually spread to exploit the entire global ocean.

Rising demand over the same period for shark and ray meat, as well as fins, gill plates and liver oil, has caused catches of the 30 or so oceanic species to soar. Marine biologists have been raising the alarm for several decades now, but their warnings were often limited to what regional trends showed. Now, new research has brought together disparate threads of data into a single, global analysis of shark and ray populations in the open ocean.

Worldwide, oceanic shark and ray abundance has declined by 71% since 1970. More than half of the 31 species examined are now considered to be endangered, or even critically endangered. Compare this with 1980 when only one species, the plankton-feeding basking shark, was thought to be endangered. These are stark statistics, and they indicate that the future for the ocean’s top predators is fast deteriorating.

To arrive at the first global perspective on oceanic shark and ray population trends, the study synthesised a huge amount of data. The researchers calculated two separate indicators of biodiversity, using indexes established by the Convention on Biological Diversity to track progress towards international targets. They used state-of-the-art modelling to estimate trends in the relative abundance of species. One of the indicators combined assessments of 31 species by the IUCN Red List over a 38-year period.

The study attributes these declines to overfishing. The researchers documented a greater than twofold increase in fishing pressure from longline fisheries for instance, which use lines stretching 100km and bearing 1,200 baited hooks. These lines are deployed each day by any one of the thousands of longlining vessels worldwide, snaring sharks in the open ocean either intentionally or as bycatch while targeting other marine life.The results revealed huge declines in the abundance of sharks in the Atlantic, Indian and Pacific oceans. Once abundant species such as the oceanic whitetip shark have declined by 75% globally in just the past half-century, while populations of the endangered shortfin mako shark – valued for its meat and fins – have shrunk by about 40%. Manta ray populations have suffered even greater losses.

The study also found increases in the proportion of sharks that are being fished beyond sustainable levels. But it’s particularly worrying that unreported catches weren’t included in the study’s analyses. This means the number of sharks and rays killed by fishing boats is likely to be an underestimate and the actual declines of these species may be even worse. Unlike most species of bony fish, sharks and rays produce few offspring and grow slowly. The rate at which they reproduce is clearly no match for current levels of industrialised fishing.

Immediate and far-reaching action is needed to rebuild these populations. It’s clear that the rate of overfishing has outstripped the implementation of fisheries management measures and trade regulations. Since most oceanic sharks and rays are caught in the high seas – areas beyond national jurisdictions – agreements between fishing nations within management organisations are needed for conservation measures to work.

But, as this new study details, fishery limits imposed by management organisations of regional tuna fisheries – bodies tasked with managing oceanic sharks and ray populations – have been largely inadequate in following scientific advice. As recently as November 2020, the EU and US blocked a catch retention ban for North Atlantic shortfin mako sharks, despite scientific evidence clearly indicating that it was the first rung on a ladder to restoring this population of an endangered species.

To begin the recovery of oceanic shark and ray populations, strict measures to prohibit landings of these species and to minimise their bycatch in other fisheries are needed immediately. This must be coupled with strict enforcement. Reducing the number of sharks and rays caught accidentally will be crucial but challenging, especially for longline fishing, which is not very selective and inadvertently catches lots of different species. This currently means that bans on intentional fishing are unlikely to be effective on their own. One solution would include modifying fishing gear and improving how fishers release sharks and rays after capture, to give them a better chance of survival.

An equally important measure, noted in the current study, would be banning fishing fleets from hotspots of oceanic sharks and rays. Research published in 2019 highlighted where these areas in the global ocean overlap with fishing vessels most. Led by the UN, negotiations are underway for a high seas treaty which would create no-take marine reserves to protect threatened species in the open ocean. This new study should urge the international community to take such action while there’s still time.