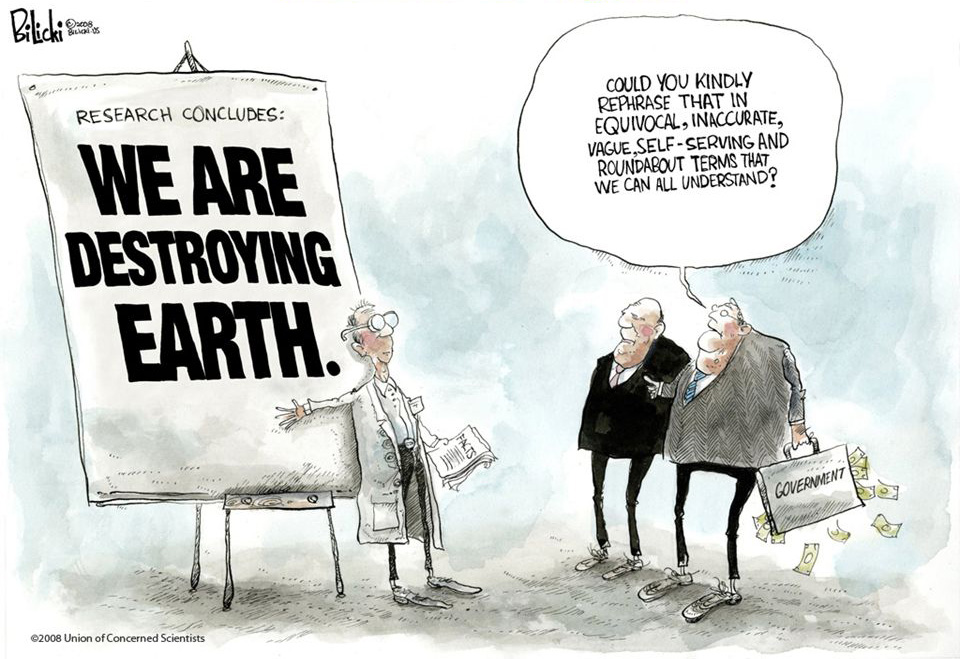 The mission: “We scientists have a moral obligation to clearly warn humanity of any catastrophic threat.” (Source: https://scientistswarning.forestry.oregonstate.edu/)

Even though it is very difficult to accept a cartoonish statement that “We Are Destroying Earth,” get accustomed to it because it’s happening, but not right before our eyes or under our collective noses. To better understand the carnage, study the science and discover collapsing ecosystems within a chaotically threatened climate system, especially where nobody lives. That’s where it starts and most prominently stands out in full living color for all to see in the Arctic, Antarctica, Greenland, Australia, Siberia, the world’s rainforests, and within the vast expanse of the oceans. Almost nobody lives in those ecosystems. What’s next?

Nascent efforts to stem the impact of a bruised climate system are underway. Increasingly, all across the land, a serious climate emergency is being recognized for what it is. In fact, over the past two years, 10% of the world’s population has declared a climate emergency:

(1) 1,859 jurisdictions in 33 countries have issued climate emergency declarations on behalf of 820 million people. Nearly one billion people “Get it”

(2) 60 million citizens of the UK, or 90% of the UK population, now live in areas where local authorities have declared a climate emergency (Hello XR).

(3) Australia, UK’s stepchild – Over one-third of the population has declared a climate emergency.

(5) Canadian assemblies representing nearly 100% of the population declared a climate emergency in 2019-20.

In sharp contrast to the posturing of the United States pre-January 20th, the Alliance of World Scientists is not pulling any punches about the challenge ahead: “The climate emergency has arrived and is accelerating more rapidly than most scientists anticipated, and many of them are deeply concerned. The adverse effects of climate change are much more severe than expected, and now threaten both the biosphere and humanity.” (Scientific American)

Those are heavy words: “…threatening both the biosphere & humanity….” Meaning- “Scientists now find that catastrophic climate change could render a significant portion of the Earth uninhabitable,” Ibid.

“Global warming has already made parts of the world hotter than the human body can withstand decades earlier than climate models expected. Measurements at Jacobabad in Pakistan and Ras al Khaimah in the United Arab Emirates have both repeatedly spent at least 1 or 2 hours over a deadly threshold.” (Source: Climate Change Has Already Made Parts of the World Too Hot for Humans, NewScientist May 8, 2020)

As it happens, excessive heat combined with excessive humidity leads to death within 6 hours. Early signs of this are already appearing decades ahead of expectations. After all, the human body has limits. If the temperature/humidity index is extreme enough, even a healthy person seated in the shade with plentiful water to drink will suffer severely or likely die. It’s the Wet-Bulb Temperature WBT. Generally speaking, a threshold is reached when air temperature climbs above 35 degrees Celsius (95 degrees Fahrenheit) combined with humidity above 90 percent.

According to scientists, in order to stem the onset of Web-Bulb Temperature peril, CO2 emissions must be sharply reduced, quickly, especially in consideration of the disquieting fact that all five of the hottest years on record have occurred since 2015.

Meantime, the main culprit, or CO2, the key driver of global heat recently reached an all-time record high for the Holocene Epoch, which represents 11,700 years of stable climate behavior, the Great Goldilocks Sleep Walk Thru Time Era. That is until excessive levels of CO2 started cranking up global warming, post-1750.

The Alliance of World Scientists’ article declares 2020 as one of the hottest years on record, and it prompted massive extraordinary wildfire activity all across the planet, Siberia, the Western U.S., the Amazon, and Australia. These unprecedented disruptions are indicative of a malfunctioning climate system. Clearly, the planet is sick.

According to the Alliance: “Every effort must be made to reduce emissions and increase removals of atmospheric carbon,” Ibid.

Along the way, several countries have committed to zero net carbon emissions by 2050-60; however, there is mounting evidence that those goals are inadequate, rather, new evidence suggests net zero carbon must be achieved by 2030, not 20-30 years later. That’s far too late.

In order to achieve something beyond a mere semblance of climate system balance (if that is even possible) it will be necessary to adhere to the goals of The Bonn Challenge Global Restoration Initiative of 2011 restoring 350 million hectares of forests and lands by 2030. Seventy-four countries have endorsed this nature-based solution.

The Alliance of World Scientists offers solutions to the dilemma:

Accordingly, the Alliance proclaims: “In December 2020, U.N. Secretary-General Antonio Guterres pleaded for every nation to declare a ‘climate emergency.’ Thus, we call for the U.S. government to proclaim a climate emergency with either Joe Biden declaring a national climate emergency through an executive order or Congress passing major climate mitigation funding and a declaration of a climate emergency (H.Con.Res.52, S.Con.Res.22) that has been buried in a Congressional committee throughout 2020. One year ago, we were troubled about poor progress on mitigating climate change. We are now alarmed by the failure of sufficient progress during 2020.” (Source: Scientific American).