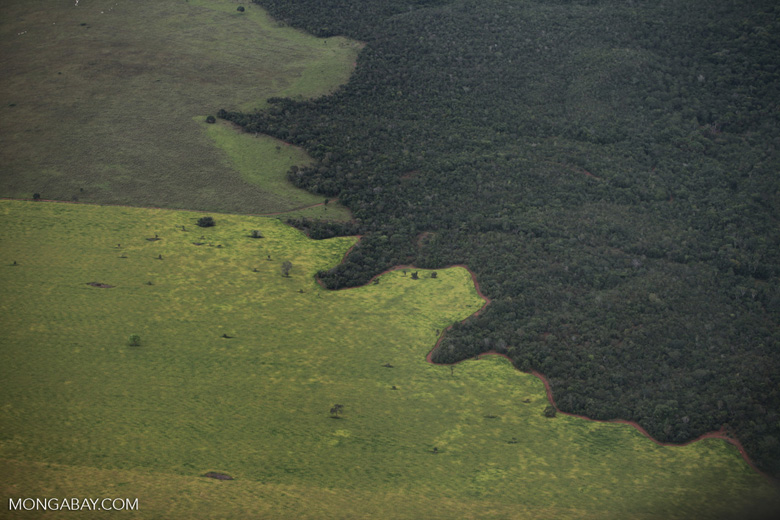 An Amazonian rainforest and cattle pasture in Brazil. Credit: Rhett A. Butler

Areas cleared of forests bleed heat to neighboring forests, and this fuels increases in temperatures there, new research has found. Average temperatures in forests around the world are already rising because of climate change; this leaked heat exacerbates the problem and accelerates local extinctions of forest-dwelling species.

“The warming is happening from global climate change but deforestation is generating additional warming, which is making climate change’s impact even worse in the tropics for biodiversity and the forest itself,” said Barry Sinervo, an ecologist and evolutionary biologist at the University of California, Santa Cruz, and a co-author of the recent paper in PLOS ONE that described the phenomenon.

The new research was prompted by findings from an earlier paper by Sinervo and colleagues. That 2010 paper analyzed patterns of local extinctions among lizard populations between 1975 and 2009 and examined the link to climate change. It predicted that almost 40 percent of lizard populations around the globe were at risk of local extinction by 2080. About 20 percent of species were at risk of being wiped out altogether.

What struck Sinervo was the unusually high rate of extinction in Madagascar, one of the most biodiverse countries in the world. “I was intrigued why Madagascar had a much higher observed extinction rate than any other [country] and I saw that Madagascar had warmed faster than mainland Africa,” Sinervo told Mongabay.

In Madagascar, two forest reserves analyzed in the 2010 paper reported an increase in maximum temperatures of 2 degrees Celsius (3.6 degrees Fahrenheit) and also a 75 percent rate of deforestation in adjacent areas. However, there was insufficient data at the time to investigate whether the rising forest temperatures were related to the nearby deforestation.

In the new paper, Sinervo and his colleagues, including lead author Jayme Prevedello, an ecologist at Rio de Janeiro State University in Brazil, examine that link by looking at data from Brazil, where rapid deforestation threatens vast swaths of forest. The team looked at satellite data for deforestation and developed a model that could estimate the corresponding increase in land surface temperature due to deforestation.

In tropical forests, the study found, loss of half of the forest cover leads to an increase of about 1.08 degrees Celsius (1.94 degrees Fahrenheit) in the land surface temperature of the adjacent forest. Based on the model, the team predicted that in Brazil, current rates of deforestation could lead to as much as 1.45 degrees Celsius (2.61 degrees Fahrenheit) of additional warming by 2050.

Forests are known to perform a cooling function, especially in the tropics. A different study published in Nature in April showed that forest cover helps cool the land by an average of 4 degrees Celsius (7.2 degrees Fahrenheit). This is a combined effect of two key factors.

The albedo effect is one: Land cleared of forest is darker in color than land with tree cover, and thus absorbs more solar radiation. Transpiration is the other: Trees absorb water from the ground and channel it upward to the tiny pores on leaves, where it evaporates and helps cool the surrounding area.

According to Sinervo, it is a mistake for people to believe saving forest patches near clear-cut areas will save the species living there. Rather, temperatures in forests left standing rise substantially, which can make them unsuitable habitats for a variety of animals. This exacerbates the direct impacts of forest loss, such as the shrinking of habitat.

Scientists are already documenting the effects of climate change on certain species in Madagascar. Christopher J. Raxworthy, a herpetologist at the American Museum of Natural History in New York, led a study showing that at least three species of amphibians and reptiles in mountainous northern Madagascar may be wiped out between 2050 and 2100 as warmer temperatures make habitats at lower altitudes unsuitable.

The message, according to the authors of the new research, is that in order to save biodiversity, deforested areas need to be reforested to mitigate the impacts of climate change, especially in the tropics.

The first steps toward understanding these impacts are now being taken. In May, the International Union for Conservation of Nature (IUCN) launched a climate-resilience project in collaboration with Madagascar National Parks. The project, funded by the African Development Bank, will cover 14 national parks in Madagascar chosen for their unique biodiversity. An initial study to be conducted by the IUCN will identify the problems caused by the increasingly unpredictable climate in these sites and look at how local communities and other private actors affect the health of the forests there, including via deforestation.

Malavika Vyawahare is the Madagascar staff writer for Mongabay. Find her on Twitter: @MalavikaVy