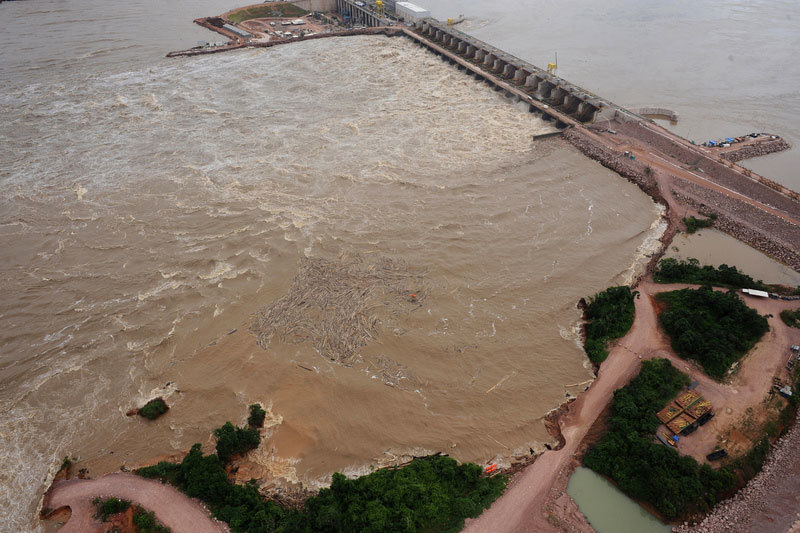 The Jirau Hydroelectric Dam in Rondonia, Brazil, pictured here in 2014, has significantly altered the flow of the Madeira River in the Amazon and displaced several Indigenous groups. LUNAE PARRACHO / GREENPEACE

More than 500 dams are planned or already under construction within protected areas around the world, according to a new study published in the journal Conservation Letters. The study is the first of its kind to quantify the global extent of dams constructed in protected areas, which can include indigenous areas, nature reserves, and national parks.

Dams currently under construction or development that will impact protected areas include the Kaliwa Dam in the Philippines, which will flood parts of Kaliwa River Forest Reserve and submerge sacred Indigenous sites; nearly a dozen dams along the Mura and Drava Rivers in Croatia and Slovenia, which will impact several Nature 2000 sites; and a cluster of small hydropower projects within Albania’s Valbona Valley National Park.

The researchers also found that more than 1,200 large dams are already located within protected areas, many of them built before those reserves were established. Most of these large dams are concentrated in North America, Europe, southern Africa, and Asia, and they are primarily used for hydroelectricity, irrigation, water supply, and flood control.

“The sheer number of dams that are planned within protected areas is alarming,” Michele Thieme, lead author of the study and lead freshwater scientist at the World Wildlife Fund (WWF), said in a statement. “Government and industry policies must prevent the development of dams planned within these areas. The dams that already exist within protected areas should be prioritized for possible removal and the surrounding river systems should be restored.”

Rivers serve as natural corridors that help maintain biodiversity, but dams can disrupt these corridors and damage the habitats of freshwater species, such as river dolphins, otters, and fish. As a result, dams are one of the primary drivers of recent declines in freshwater biodiversity. The population abundance of freshwater vertebrates fell by 83 percent from 1970 to 2014, and the extinction rates for fish exceeded those of other vertebrates in the 20th century. Dams are also particularly harmful for local communities whose livelihoods depend on access to fishing or floodplain farming.